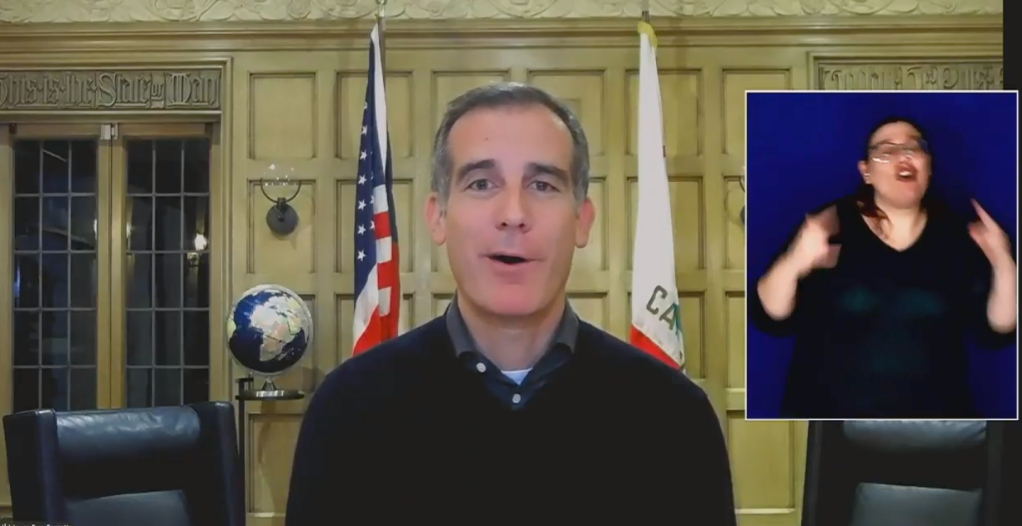 Amid an avalanche of awful Covid-19 news on Wednesday, Los Angeles Mayor Eric Garcetti announced a renewed focus on preventing gatherings ahead of New Year’s Eve.

“We will enforce the public health rules,” Garcetti warned of the longstanding order that Angelenos not mix with people outside their households. “We will have the LAPD patrolling the city to stop large gatherings.”

But Evangelical Christian Sean Feucht wants to gather a crowd, sing Gospel music to the homeless of Los Angeles and defy government restrictions with a series of concerts planned starting Wednesday night on Skid Row. That, despite concerns from some that the gatherings could be Covid-19 super-spreader events.

“I would encourage him, first of all, not to do it,” said Garcetti when asked about Fuecht’s plans. “If you care about human lives and what God has given us — this human life — don’t do it.”

“We will be there, said the mayor, “the county and the city. The county DPH can and should enforce if there’s any violation of any of the public health directives that are out there. And L.A.P.D will be there to make sure that we also enforce people’s safety and aggressively encourage people — whether it’s masks or whether it’s our officers ensuring there is not any physical violence…This is just a bad recipe.

“People can exercise their rights, but they should also understand their responsibilities,” said the mayor, “so we will be out there. Obviously religious and political speech is protected, but this is just a bad idea.”

Wednesday night’s public event was expected to take place at 7 p.m. near the intersection of Fifth Street and Towne Avenue, but homeless advocates with the L.A. Community Action Network and other organizations want to protect the vulnerable population from the virus and were planning to stage a vehicle “blockade” against it starting at 6 p.m.

Feucht, a volunteer pastor and failed Republican congressional candidate from Redding, has a history of defying Covid-19 health mandates. He’s been on tour hosting “Let Us Worship” open-air concerts nationwide to push back against government restrictions on religious gatherings.

Besides Wednesday’s performance on Skid Row, Feucht has another concert planned Thursday at Echo Park Lake, followed by a New Year’s Eve party at a church parking lot in Valencia.

Some of the singer’s events have featured hundreds of maskless worshipers tightly packed together as they sing and dance, which is something Skid Row activists said they fear could further spread the virus at a critical time when Los Angeles County is facing record daily deaths and a severe shortage of intensive care hospital beds. The state this week also extended its stay-at-home order banning public gatherings.

Garcetti then went on to announce that, not for the first time, he had directed the Department of Water and Power to disconnect services to “a chronic party house.”

In August, the mayor authorized the shutoff of utilities at a home in the Hollywood Hills where several large parties were held in violation of the city’s COVID-19 social distancing orders. Garcetti said the city’s action comes after multiple warnings from law enforcement were issued.

“If you proceed with in-person events,” said Garcetti, “it’s likely medical care will not be available when you need it in a few weeks.”

The mayor announced on Aug. 5 that he would authorize the Department of Water & Power to shut off utilities to homes and businesses that host “egregious” gatherings amid the COVID-19 pandemic.

“While we have already closed all bars and nightclubs, these large house parties have essentially become nightclubs,” said the mayor in early August. He then indicated he would hold homeowners to similar scrutiny: “The same thing we would do with businesses.”

At this very second, health care workers across L.A. are fighting with everything they’ve got to save lives.

Please stay home as much as you can. Do it for them. pic.twitter.com/gDOUypX5j2