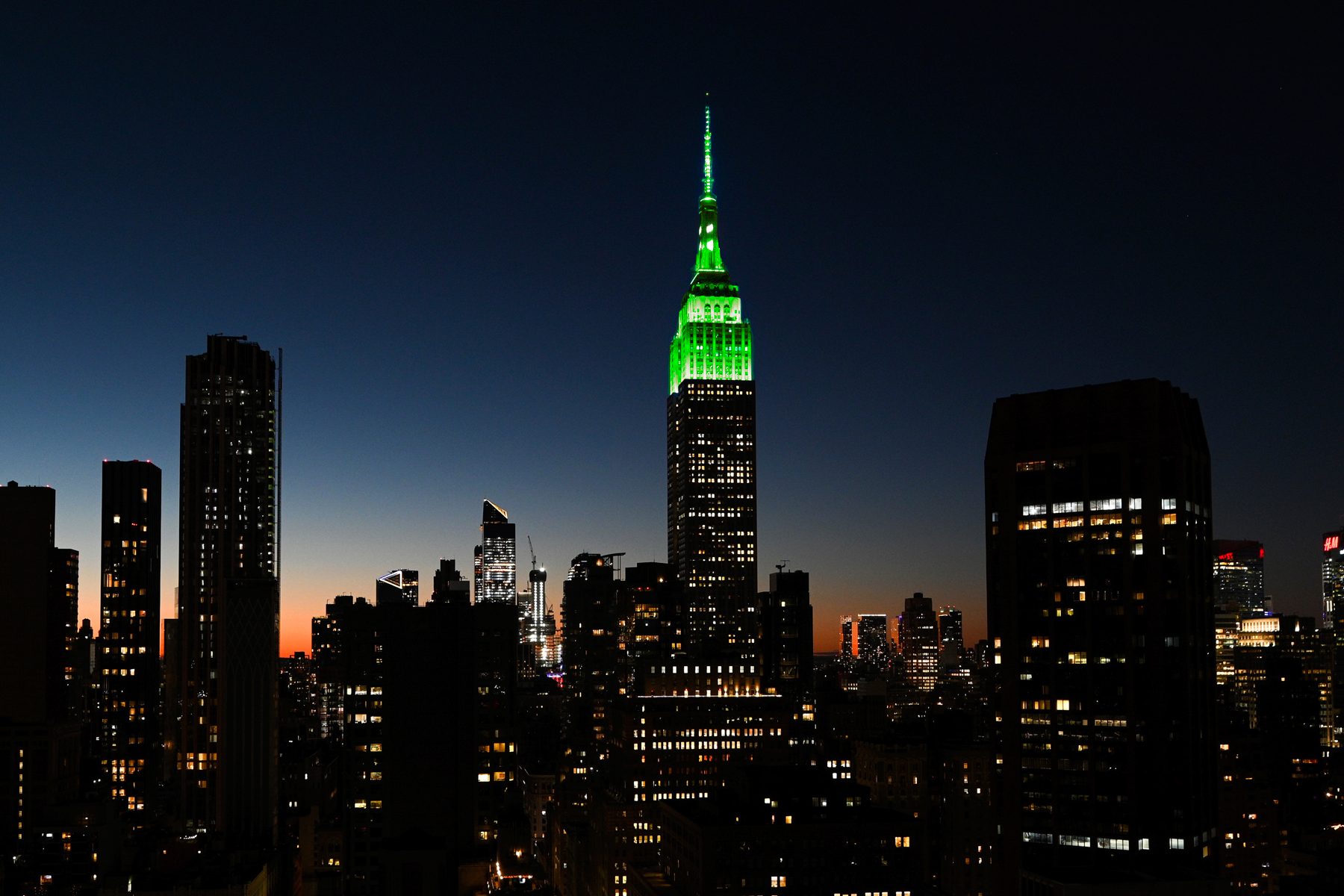 The New York legislature on Tuesday night passed the Marijuana Legislation and Taxation Act. Governor Andrew Cuomo signed it into law on Wednesday morning, making New York the 15th state in the nation to legalize cannabis for recreational use. “I just signed legislation legalizing adult-use cannabis,” Cuomo tweeted. “The bill creates automatic expungement of previous marijuana convictions that would now be legal. This is a historic day. I thank the Leader and Speaker and the tireless advocacy of so many.”

So yes, it actually happened. Weed is now legal at the state level and the implications go far beyond providing any ol’ New Yorker with the ability to walk into a store and buy themselves some flower. The regulated cannabis market in the nation’s fourth-most-populous state is expected to be a $4.2 billion industry within five years of taking effect, and, according to Cuomo’s office, create $350 million in annual tax revenue, along with 30,000-60,000 new jobs. Meanwhile, the drug responsible for thousands of low-level possession arrests per year, well over 90 percent of which are of New Yorkers of color, will no longer be criminalized. Tens of thousands of those affected by the War on Drugs — New York law enforcement was making over 50,000 possession arrests a year as recently as 2011 — will have their records expunged.

‘We Are Better People Because of John Lennon’

Here’s everything else you need to know about the landmark piece of legislation:

New York has been trying to legalize cannabis for years, but Governor Cuomo and the state legislature haven’t been able to come to terms on how to set up a recreational program. The bill agreed upon last week and which the legislature passed Tuesday skews more toward what lawmakers have had in mind: more transparency, less gubernatorial control, and more earmarking of revenue for social equity programs. “I was a little surprised that [Cuomo] went as far as he did in the compromises that were reached, because it’s significantly not his program and more of what [the legislature] had been proposing all along,” says David Holland, executive director of Empire State NORML, the New York branch of the nonprofit dedicated to cannabis legislation reform.

The elephant in the room here is that Cuomo may have made the concessions he needed to make to get a deal done because he’s staring down impeachment over what has seemed like a never-ending procession of sexual misconduct allegations. Coming to terms with the lawmakers who could vote you out of office is probably a good move on his part, and the deal has brought favorable headlines. “I believe that [Cuomo] and the legislature have been very dedicated to this issue, but if [agreeing to a deal] helped forge alliances with other issues that lay ahead for him, then it wouldn’t surprise me if that factored into his considerations,” Holland says.

The move will also put New York on similar footing with some of the other Northeast states that have legalized, most notably New Jersey, where a ballot measure to do so for recreational use passed in November. Cuomo has been open about the pressure this has put on New York. “We have passed the point of legalized cannabis,” he said last week, hours before the news of the agreement was reported. “It’s in New Jersey. It’s in Massachusetts. To say we’re going to stop it is not an option. It is here. The only question is, do we regulate it here, do we gather the revenue here, or do we have people driving to New Jersey, which is right there, or to Massachusetts if you’re in a northern part of the state, but it is here.”

Regardless of his motivations, Cuomo signed a robust, progressive legalization bill advocates are happy with. This is a good thing.

What’s in the bill?

Let’s go ahead and use a few bullet points for some of the basics:

What else? What about social, economic, and racial equity?

As long as cannabis legalization has felt inevitable, cannabis advocates have been working to ensure that state and federal legalization legislation is geared around lifting up the communities that have been disproportionally affected by the War on Drugs. Their work paid off last year when the U.S. House of Representatives passed the Marijuana Opportunity Investment and Expungement Act. More recently, Evanston, Illinois, approved a reparations program that will be funded by revenue from cannabis legalization.

The most immediate way New York’s legalization bill will address the issue is through the automatic expungement of records for those who have been convicted on cannabis-related charges that are no longer criminalized. This is expected to impact tens of thousands of New Yorkers who had been arrested for low-level offenses. The state will also work to ensure New Yorkers who have been disproportionately impacted by the War on Drugs will be able to get a piece of the industry. An apparatus will be set up to promote equity among the state’s cannabis businesses, with a goal of distributing 50 percent of licenses to, as Cuomo’s office outlined, “a minority or woman-owned business enterprise, or distressed farmers or service-disabled veterans to encourage participation in the industry.”

Advocates are also encouraged that, minus the cost to cover the cost to implement the program, 20 percent of cannabis tax revenue will go to treatment and public education, 40 percent will go to school aid, and 40 percent will go to a Community Grants Reinvestment Fund. “Just as important as it is to focus on the economic opportunities to be created from the social equity businesses, it’s equally important that the money can go to these impacted communities,” says Tahir Johnson, host of the National Cannabis Industry Association’s Cannabis Diversity Report. “Because even if a person doesn’t want to be directly involved in the cannabis business, they’ve certainly been impacted by the War on Drugs and should benefit from legalization.”

The equity provisions outlined in the bill are a big step in the right direction, but some still have concerns. Holland of Empire State NORML points to how the bill gives undue priority to medical organizations and lacks any sort of plan to bring longtime operators in New York’s underground — or legacy — cannabis market into the regulated recreational program. “The people that are theoretically going to be prioritized are not necessarily those people that have run the world’s largest marketplace for decades,” he says. “If we’re going to talk about equity, there’s got to be greater opportunity for these players to come in and continue to operate as the market leaders and as those people who have a developed infrastructure already in place, because that’s how market efficiency works. If you displace them, all you’re doing is perpetuating the legacy market, and the state loses and the community loses. Without them, you’re going to have not only market inefficiency, but market inexperience.”

Is everyone excited that the Marijuana Legislation and Taxation Act passed?

Not exactly. The state legislature debated its merits for three hours before passing it by a 40-23 vote in the Senate and 100-49 vote in the Assembly. Many of the arguments made by opponents centered around the idea that usage and access will increase, all of which Sen. Liz Krueger, who sponsored the bill along with Assemblymember Crystal Peoples-Stokes, shot down by pointing out in various ways that people have no problem obtaining and using cannabis currently. As Chris Robbins of Gothamist reported, when Staten Island Sen. Andrew Lanza questioned Krueger’s concern for children, Krueger said, “That’s why this law starts at 21.”

More complicated are concerns over the danger of impaired driving, which was reportedly one of the sticking points during the home stretch of the negotiations between Cuomo and state legislators, as there’s no way to reliably test for THC impairment, like there is for alcohol. Impaired driving has been cited by the New York State Association of Chiefs of Police in its opposition to the bill, as well as the District Attorneys Association of New York, the Trucking Association of New York, and other groups. “For us in the trucking industry, the highways are our work place, and without the ability for us to test for impaired driving, we are just very concerned as to whether or not we will potentially see an increase of accidents related to the legalization as a result,” said President Kendra Hems, according to NEWS10 in Albany. (It is still unclear what effect cannabis has on drivers.)

To help assuage concerns, the Marijuana Legislation and Taxation Act calls for a study into cannabis-impaired driving and training for law enforcement officers in how to detect it.

What now? When will New Yorkers be able to buy cannabis?

The state is going to need time to hammer out a regulatory framework, and it may be several months if not well into 2022 before New Yorkers can buy cannabis legally. Until that happens, local cannabis advocates will work to ensure the existing industry is represented in how that framework is formed. “Let the industry help guide legislators as to what they should look like and help tell the municipalities what they can do to help support this marketplace and the opportunities that we create,” Holland says. His organization, Empire State NORML, plans to pivot from legislative reform to consumer-centric issues like safety and marketplace education.

There’s still plenty of work to do before New York will have a flourishing and equitable recreational cannabis industry, but, again, the impact of one of the nation’s most populous and politically significant states committing itself to doing so cannot be overstated. “New York is one of the most important cities in the world,” Johnson says. “Legalization will certainly have far reaching implications for the industry. Hopefully we’ll see a trend where this continues, not only in states, but federally. The fact this social equity is a part of it is important. We shouldn’t be building this multibillion dollar industry without making sure that people who have been victimized have an opportunity to be a part of it.”