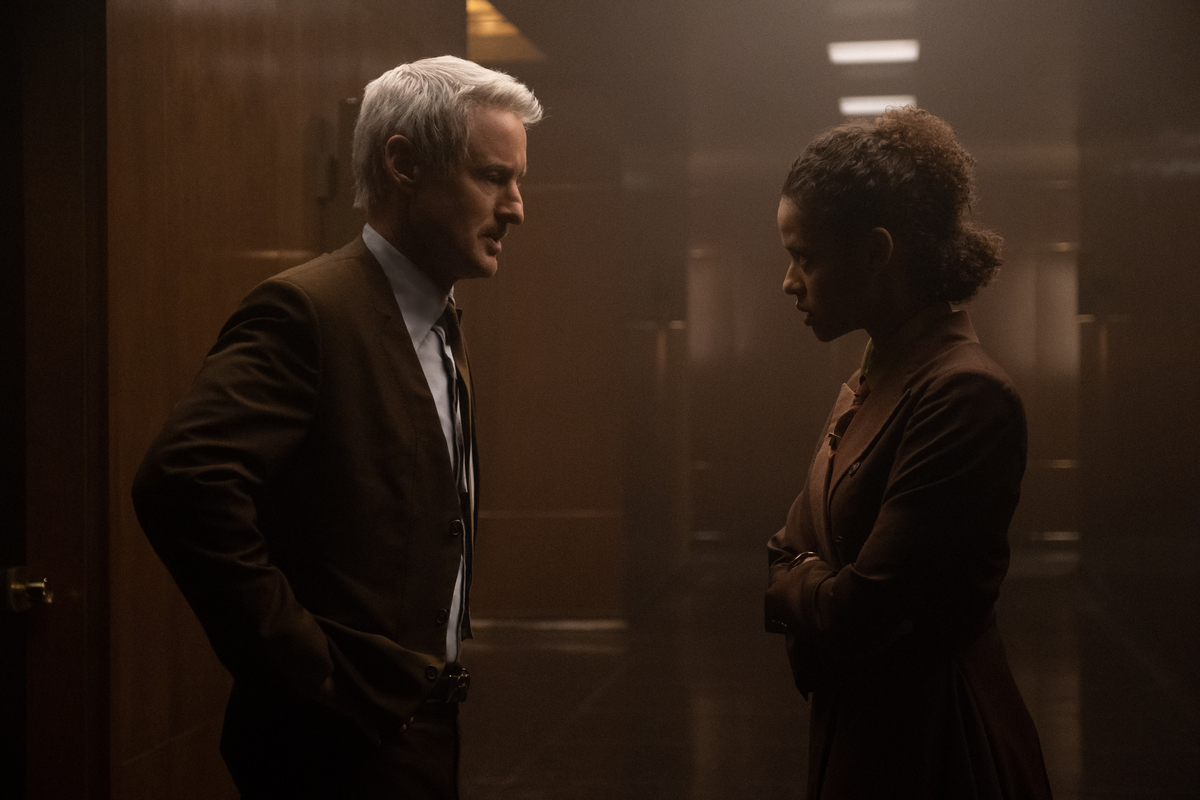 First of all, holy shit!

Ok, now that’s out of the way I have to calm down enough to review Marvel’s Loki, episode 4, “The Nexus Event,” which had me on the edge of my seat until the post-credits scene. During said post-credits scene I was very much out of my seat. I don’t remember when I stood up, but I guess it must have happened at some point in the 0.2 seconds between being overjoyed that Loki wasn’t dead (again!) and seeing Richard E. Grant. But let’s backtrack, because there is so much to talk about before we get there.

The first three episodes of Loki were often divisive. As much as I personally loved them, a quick scroll through the comments section under my reviews revealed that not everyone was as enjoying the series as much as I was. However, many of the complaints I read were about elements of the story that paid off extremely well in Loki episode 4.

Patience is very much a virtue, so if you felt there was value in spending last week’s episode just hanging out with Loki and Sylvie on a doomed moon and getting to know the pair better, you likely got a lot out of their forced separation and the moment they reunited to face off against the “Time-Keepers.” If you enjoyed the weird friendship building between Loki and Mobius in the first two episodes, you probably felt that gut punch when Loki had to watch him die. And if you’ve been deeply suspicious of Renslayer and scoping her office for clues during those TVA admin scenes, you finally had the chance to yell “HA! I KNEW IT!” when she turned out to be a wrong’un.

We started the episode with a little backstory. We got to witness Sylvie being snatched by the TVA as a child and eluding her Variant pruning by a dispassionate Renslayer, but this scene immediately became a bit of a Loki timeline headache: this wasn’t a quick pruning before a Nexus Event hit the redline – Sylvie was born a Loki and lived for quite a few years on Asgard before Renslayer and the TVA stepped in. Questions arising from those events are left unanswered in episode 4, so we’ll have to put them on the backburner for now.

We then snapped back to the “present” when the TVA stepped in to haul Loki and Sylvie out of the Lamentis apocalypse, which ultimately led to Mobius and B-15 facilitating their escape from captivity. We suspected this might happen. What we didn’t know was how it was going to go down, and the answer came in agonizing drips as Mobius and B-15 started to question everything they thought they knew about the TVA and its mission. It was tense af – from B-15 taking Sylvie back to Roxxcart and experiencing some heart-breaking memories of her true past, to Mobius finally realizing that Renslayer was a lying liar from Lietown, it really did feel like these breakthroughs could go either way because – as we are all now very much well aware – Renslayer is anything but stupid.

In episode 4, Renslayer did her best to get rid of Loki and Sylvie, but the duo appeared to have formed quite the bond in their brief time together; a bond that Mobius picked up on fairly quickly after love first saved the day. At this point, it’s time to address the elephant in the room: Loki and Sylvie’s budding relationship. Many of us would have preferred this to stay as more of a sibling thing, and episode 4 appears to be laying the groundwork for a romantic connection, at least on Loki’s part. Whether this show will continue to advance the romance between them remains to be seen, but perhaps we should attempt to strap in for the inevitable here?

Elsewhere, Owen Wilson just continued killing it as Mobius. He and Loki’s friendship has been such a key emotional anchor in this series, and the thrill of watching Mobius connect the dots and finally try to break out of the box the TVA put him in was cut so awfully short by his sudden death at the end of a pruning stick. Just a devastating moment, and one that the show allows Loki to feel deeply, albeit briefly. I really hope this isn’t the last we’ve seen of Wilson in the show, though I’m not sure how he could be worked into further MCU installments if he somehow reappears and makes it to the end. Loki season 2? Fingers crossed, as there’s obviously even more dark shit going on behind the scenes of the TVA yet to come.

So the omnipotent and lizard-like Time-Keepers are nothing but androids, huh? Nothing but a pantomime. Again, this is something that many Marvel fans have anticipated, but who is really behind the TVA, the mythology of the Time-Keepers’ creation, and the dubious nature of the “sacred timeline”? Is it really going to turn out to be Kang the Conqueror? It’s hard to forget that Renslayer is Kang’s girlfriend in Marvel Comics, and Kang is definitely set to make an appearance in the now-filming Ant-Man 3, but I suspect this show has a few big surprises in store for us in its final two episodes.

They’ll have to be big surprises, because episode 4 gave us some huge ones in its final minutes. We had to watch Renslayer kill Loki in the middle of confessing his feelings before Sylvie captured her. Not for nothing, the way Renslayer’s eyes changed when she faced the end may have been easy to miss upon first watch, but it seemed like her death may well have been a mercy. I wonder how much of Renslayer’s villainy is beyond her control.

Then there was that post-credits scene. Marvel, ugh. You got me again. Of course Loki isn’t dead. At the heat death of the universe, the only things left alive will be cockroaches and Tom Hiddleston in full Loki costume running lines. No, Loki got his own “come with me if you want to live” moment instead, and we were introduced to a whole bunch of new Loki Variants who seem to have already figured out how to cheat TVA crackdowns. “Boastful Loki,” “Kid Loki,” “Alligator Loki” – his gold horns I can’t – and “Classic Loki,” none other than Richard E. fucking Grant.

There’s some stuff I haven’t covered here, including Loki’s Time Cell encounter with Lady Sif, and the way in which it forced Loki to address his past behavior and put a stop to yet another cycle of his being a total asshole – this sequence reminded me of Lucifer’s hell loops honestly. There was also the moment we got a first confirmation of vampires in the MCU – Blade is coming! – but it’s hard to focus on everything when my brain is screaming “I CAN’T BELIEVE I HAVE TO WAIT ANOTHER WEEK TO FIND OUT WHAT HAPPENS NEXT.”

Hope you all enjoyed this one. I’m excited to find out.

20 of the Best Audiobooks of All Time
Abolishing House of Lords would spark ‘fundamental challenges’, Speaker warns
Chinese Hackers Target Middle East Telecoms in Latest Cyber Attacks
Albanians ‘should be barred’ from claiming UK asylum, minister says
Here are the Best Books of 2022, According to Buzzfeed