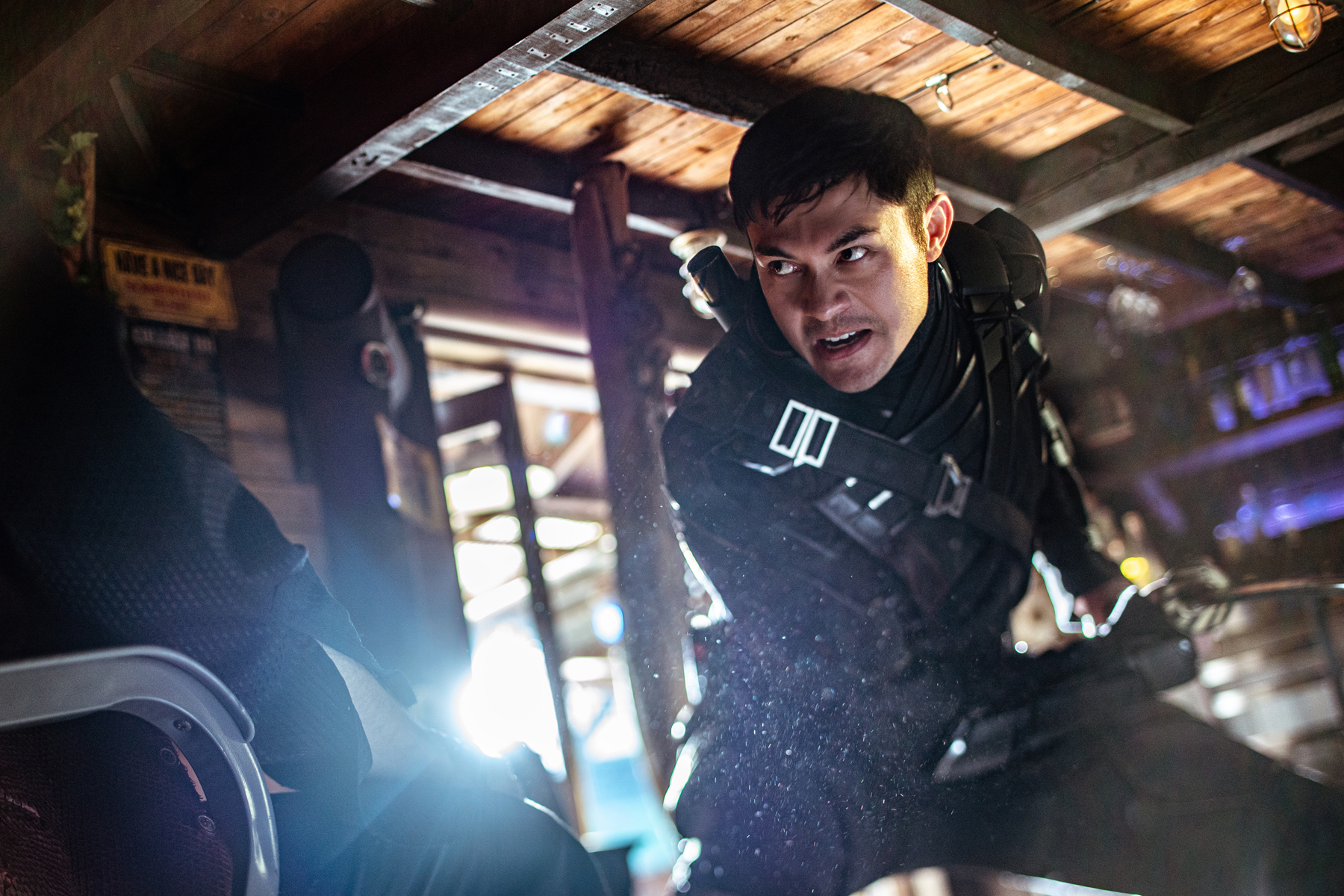 In the beginning, God created the heaven and the earth. Over the next several days, He would create the evening and the day, the light and the dark, the waters and the firmament, the movies and the Military Industrial Complex and various corporate marketing divisions.

On the fourth day, He created Hasbro, a collective maker of toys, and watched as it dreamed up many ideas for figures of action. One was a line of large, burly soldiers of various types, some with beards and some without, all with scars upon their cheeks. Ah, they are like Barbies, but for boys, the Lord thought. They called them all “G.I. Joe.” And you shall know them by the trail of easily swallowable accessories behind them.

After these toys fell out of fashion, these people of Hasbro would consult with those from the land of Marvel, or so the legend said, and together they concocted an idea to do another line of action figures, also with the name G.I. Joe. These would be smaller, and varied, and Real American Heroes, and also include many vehicles and villains and ninjas. This pleased the Lord — He did love Him some ninjas. Comic books and an animated TV series would help spread the Gospel of St. Joseph of the Government Issue far and wide. The toys became very popular, especially a figure known as Snake Eyes. Why this tiny soldier was called that, the Lord could not say; the figure wore a mask that covered his allegedly reptilian peepers. But he wore all black body armor and looked cool, and God saw that he was good.


The 100 Greatest Movies of the Nineties

Black Sabbath on the Making of ‘Vol. 4’: ‘It Was Absolute Pandemonium’

On the fifth day, God noticed that the tribe of Paramount had commissioned films based on this line of toys, starring Channing Tatum and Dwayne Johnson and Joseph Gordon Levitt and many other actors of talent and note. The movies followed an elite band of military commandos fighting an evil organization known as Cobra, while pushing an elite brand that bespoke of corporate synergy. (Memo to thyself, God wrote: Snakes, Garden of Eden, look into that.) They were generic blockbusters, with titles like G.I. Joe: The Rise of Cobra and G.I. Joe: Retaliation, their volume knobs stuck on 11, all “Hoorah” at 24 frames per second. Though God would watch the Rock in just about anything (big fan, the Lord), this was testing His tolerance.

He did, however, admire how the franchise treated Snake Eyes. Played by Ray Park (of Darth Maul fame), the silent, masked commando was a welcome presence among the jingoistic chest-beating. Also, he fought an army of ninjas while hanging on a mountainside. “Who doesn’t love a kick-ass ninja fight?” thought the Lord.

On the sixth day, God awoke to find a spin-off G.I. Joe movie devoted solely to Snake Eyes, one bearing his name and a subtitles promising of a story of “G.I. Joe Origins.” The Lord smiled. He saw that Henry Golding, that hunky star of Crazy Rich Asians, was playing a young man who fought in cages for money and vowed to avenge the death of his dad, which he witnessed as a child. His nickname was “Snake Eyes,” so… was he also a Joe? Or was this a coincidence?

A powerful yakuza named Kenta (Takehiro Hira) approached the fighter with an offer: infiltrate a rival organization, procure something of value that they possess, give him the item, and he will deliver the gentleman who killed Snake Eyes’ father. After a fight at a fish warehouse, where the young man saved the life of this other yakuza, Tommy (Andrew Koji), Snake Eyes found himself being introduced to the inner circle of the Arashikage clan. Their head of security, Akiko (Haruka Abe), was wary of his presence, but Tommy trusted him. If he could pass the Three Challenges, Snake Eyes would become a bona fide member of the Arashikage. But, in addition to the homoerotic tension between him and Tommy — which even the Lord was picking up on — there was an internal conflict brewing within Snake Eyes: Would he betray his new family, or forego his lifelong quest for vengeance to protect those who treated him as one of their own?

So He watched, and the Lord saw this was… not bad? It was, in fact, a highly serviceable yakuza drama, detailing battles of honor and humanity with a touch of chambara genre flourishes here and there. If Golding wasn’t the most magnetic lead, God thought, he was still OK, and the supporting cast, including The Raid star Iko Uwais, was impressive. Maybe its director, Robert Schwentke, overdid it with the blurry, shaky action sequences, and there was some sort of narrative nonsense involving a mythical “sun jewel,” but He was a merciful and forgiving God.

And still, the Lord was confused: What did any of this have to do with G.I. Joe? A Cobra insignia showed up inside a crate of weapons, sure, but other than that, it almost felt as if its creators were trying to smuggle in an interesting tale of loyalty and betrayal among the yakuza under the cover of a trashy franchise entry. Plus, more ninjas! God was impressed. This was far more interesting than watching men and women in camo pants firing insanely large guns and listening to the Cobra Commander issue orders via a third-rate vocoder growl. Out of sheer happiness, He created new creatures and creeping things upon the Earth to celebrate this small victory.

But then a few new characters began to enter the picture, and hints began to be dropped that this was, in fact, very much part of the larger series’ storyline mentioned in the movie’s subtitle. Not even the presence of Money Heist‘s Úrsula Corberó (God made a note to finish watching Money Heist‘s fourth season after he was done creating everything in the heavens and on earth) as a slinky villain known as the Baroness could stave off a sense of disappointment. To quote one of His favorite sons: Ever get the feeling you’ve been cheated? The more this film began to retcon this story into the Joe-verse, the more He became a God of wrath. After a badly put-together climax and the usual set-up for next-gen sequels, He was extremely tempted to start smiting things. Still, the Lord did not release even one plague upon its makers. They were only doing what their lords, the corporate ones, had asked them to do: Sell tickets and sell toys. God wept.

And on the seventh day, God ended his work and rested. Because even for him, enduring this whole endlessly puerile blockbuster mishegas one more time was, if He was being honest, divinely exhausting.