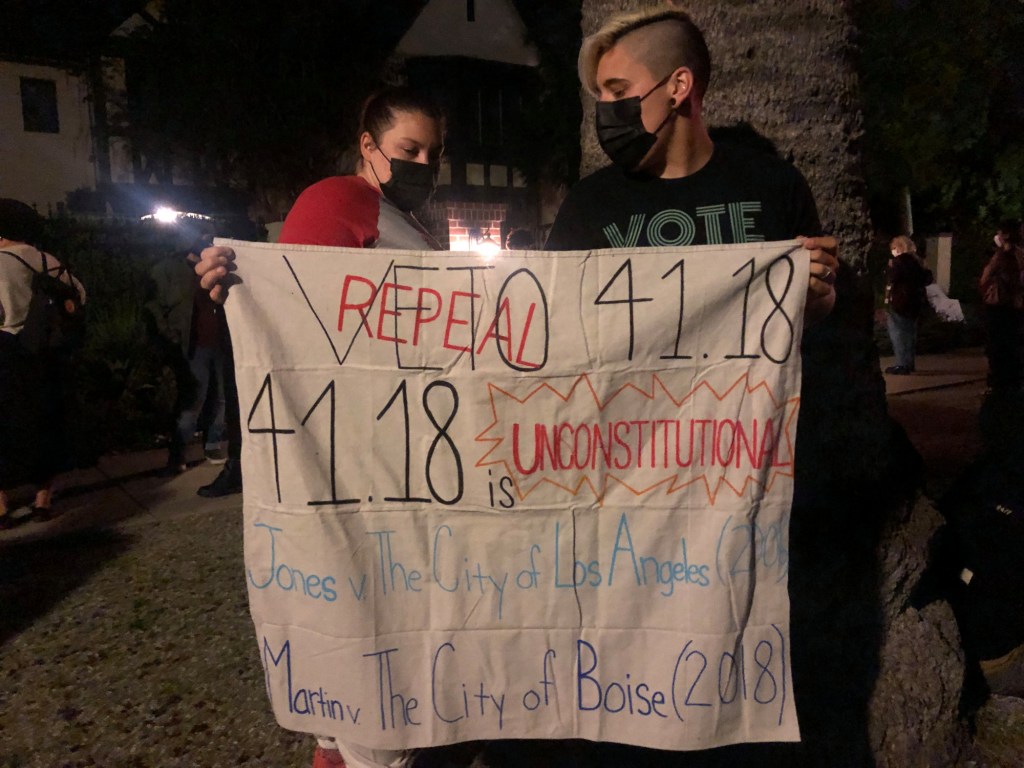 Several hours after Los Angeles Mayor Eric Garcetti signed an anti-camping law that bans people from living on the street in some public areas, about two dozen activists gathered in front of the mayor’s mansion Thursday evening to voice their disapproval of the ordinance, and for some, to camp there overnight.

“We’re not leaving!” yelled Andy Navarro into a megaphone toward the Getty House. “We’re gonna stay here until he repeals it or until we get kicked out.”

Protesters called on Garcetti to rescind his signature and to veto the ordinance, a move that remains unlikely as all but two of the 15 City Council members voted in favor of the law.

The newly signed law may serve as an enforcement tool for the city to clear homeless encampments, similar to sweeps seen in Echo Park Lake, Venice and other Los Angeles neighborhoods, such as parts of the San Fernando Valley.

Signs were placed along the shrubs and fencing that surrounds the mayoral mansion, decrying the prospect of continued sweeps of homeless camps, which often involve law enforcement: “House keys not handcuffs,” “Your sweeps are violent, we well not be silent!” and “Sweeps = death.”

About two dozen protesters are gathering in front of Eric Garcetti’s house just a few hours after the LA mayor signed an anti-camping law that activists say criminalizes homelessness and poverty. pic.twitter.com/AQ6NGC3Tmh

Scores of people took to social media Thursday evening amid the news of Garcetti’s signing. Many questioned why he moved so swiftly.

“I think that Garcetti signed the bill earlier today so that he could avoid the backlash, like, ‘Protesters, you don’t have a reason to protest anymore,” said Tommy Kelly, an organizer with Street Watch LA, a tenants rights group. “Either that, or he’s desperate to criminalize homeless people.”

The number of people living on the streets increased across the city throughout the pandemic and amid an ongoing housing affordability crisis.

UCLA researchers estimate that at least 40% of the city could be off-limits to camping. Enforcement of the new law could take place in public areas around many locations, including homeless shelters and services facilities, tunnels, under- and overpasses, bridges, washes, as well as near so-called “sensitive use” sites such as daycares, schools, public parks and libraries.

Researchers also said the lack of housing and shelter in the city would make it difficult for homeless people to follow the new law.

“People, our most vulnerable, they deserve homes,” Navarro said. “Imagine how having a home will improve people’s lives; somewhere to lay your head, to brush your teeth, have a shower; those things are basic human rights and necessities that people need and that should be given to everybody,”

Water bottles and snacks were stacked alongside a speaker that played Lil Nas X’s new single, Industry Baby. Some protesters shinned flashlights onto the mansion, projecting silhouettes of people holding up the middle finger.

Two LAPD officers and a supervisor stood by for several hours before walking away, which drew cheers from the crowd. A helicopter eventually flew overhead, keeping an eye on the crowds.

It was not known whether Garcetti was actually home Thursday evening. Garcetti signed the anti-camping law just weeks after President Joe Biden tapped the mayor to work as ambassador to India.

“Someone called it ‘Such a horrific parting gift to the city of Los Angeles,’” Kelly said. “I hope that he gets, or feels it somehow, some negative feedback for callously and quickly criminalizing people.”

The Murdaugh family saga a tangled web of secrets and murder
New York Restaurant Hostess Attacked After Asking Guests to Show Proof of Vaccination
Who are SpaceX’s civilian astronauts, what are their roles and how will they land?
‘Waterboy’ Star Peter Dante Arrested, Allegedly Threatened to Kill Neighbor
5 facts about ‘community cats’ and why they’re important in our neighborhoods