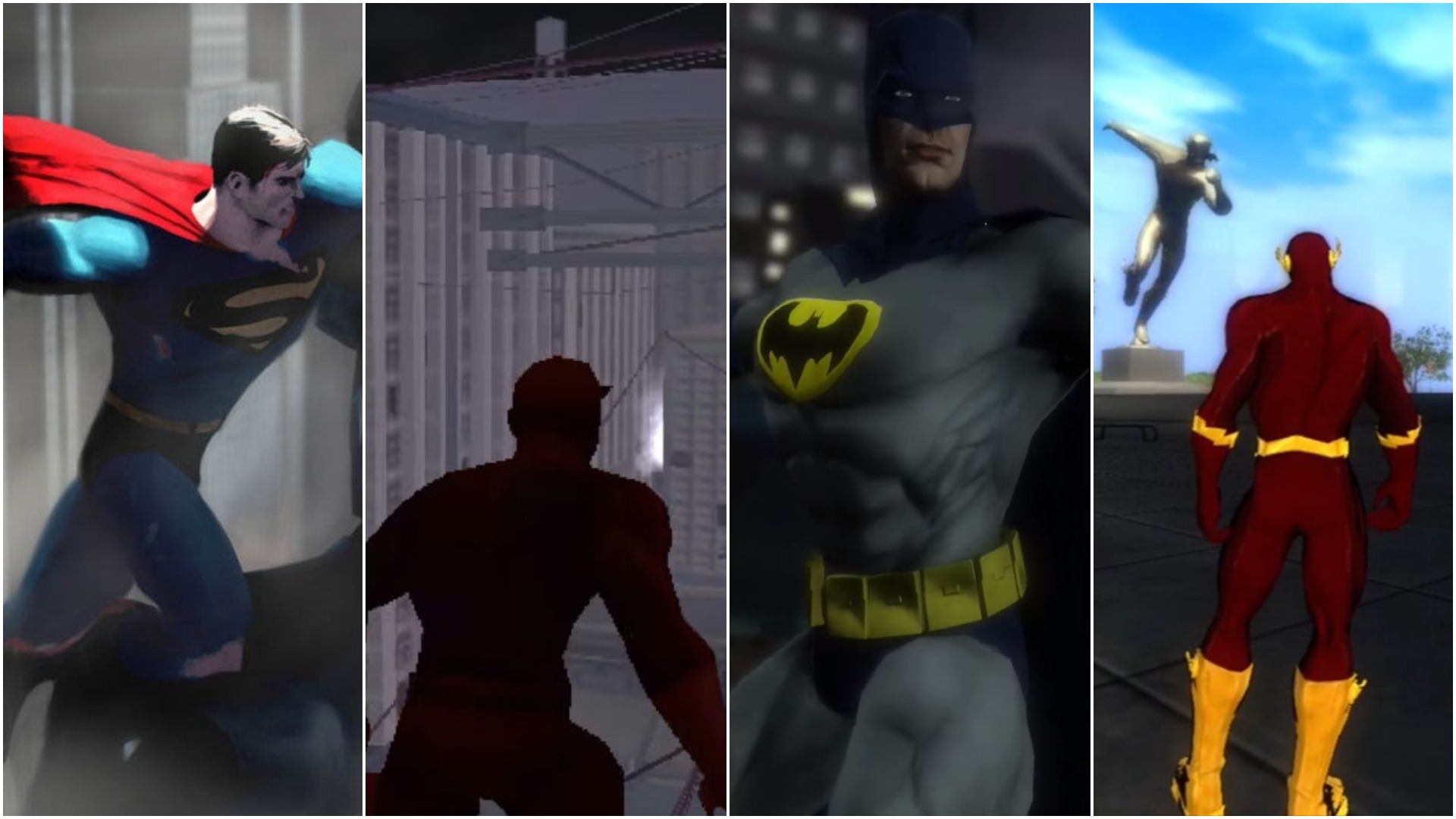 We’ve been blessed with a surprising number of great superhero video games over the years. From Batman for the NES to The Incredible Hulk: Ultimate Destruction and Marvel’s Spider-Man, developers have often shown superheroes the love it took them years to consistently receive in other mediums.

Yet, I understand why it’s so easy to focus on the superhero games we almost got rather than the ones that we did get. There’s an entire section of gaming’s digital graveyard devoted to canceled superhero games, and it’s filled with projects that could have been contenders or, at the very least, would have given comic book fans everywhere the chance to spend time with characters that still haven’t gotten a proper video game adaptation to this day.

So brace yourself for disappointment as we look at what could have been and 15 of the most notable superhero games that should never have been canceled.

As the name suggests, X-Women was based on the idea that all the male X-Men team members have been incapacitated by the Genesis Virus. It’s not only an interesting concept that would have put characters like Storm and Jean Grey in the spotlight, but the project was even being developed by Clockwork Tortoise: the studio behind the excellent Sega Genesis version of The Adventures of Batman & Robin. This game seemingly had a lot going for it.

So why was it canceled? Well, according to those who worked on the project in the late ‘90s, X-Women got off to a rough start that it never really recovered from. A combination of technical shortcomings, studio drama, and Sega’s desire to start moving away from the 16-bit era pretty much doomed this game before it ever had a chance to become more than some vague ideas.

Interestingly, though, a working version of the Spider-Man 4 prototype was discovered on an old Nintendo Wii devkit in 2019. While it’s obviously not fair to judge a half-finished prototype too harshly, everything we’ve seen of this game suggests it would have been…pretty much just ok. It’s doubtful we missed out on anything better than a pretty good rental when this one was eventually canceled.

I’ve actually heard conflicting reports about this game over the years, but most accounts of its development suggest Marvel Chaos was supposed to be a Marvel fighting game modeled after the Def Jam series. Needless to say, that idea had a lot of potential.

That makes it all the more depressing that nearly every report about this game’s development agrees that it was canceled simply because it wasn’t very good. EA decided to cancel this project rather than invest more money in it, which ultimately led to EA Chicago’s closure and the end of EA and Marvel’s partnership (at least for a time).

Apologies for the confusing title, but it’s pretty hard to talk about this game without eventually getting around to the fact that it was essentially supposed to be the PS1 port of the infamously bad Superman 64. However, because the PS1 couldn’t quite handle some of the free-roaming mechanics featured in the N64 game, this port was essentially redesigned by developer BlueSky Software to be its own thing.

Do you know what’s really funny? A recently leaked prototype of this canceled game suggests that it actually might have been kind of fun. At the very least, this port’s emphasis on linear combat looks a lot more enjoyable than…whatever Superman 64 was going for. In a world where most Superman games are bad, it’s a shame this one didn’t get the chance to at least be decent.

An MMORPG set in the Marvel universe made by the City of Heroes team? How did this game ever get canceled when it’s seemingly a license to print money that might actually be more valuable today than ever before?

Well, some reports suggest this game simply wasn’t coming along as quickly as some hoped it would, but according to Microsoft, the game was ultimately canceled largely because they looked at how every non-WoW MMO on the market at that time was performing and felt that Marvel Universe Online had a slim chance of making enough money to justify everyone’s investments.

The rise of the open-world genre has also meant the rise of superhero fans wondering why more game developers just don’t put their favorite characters in an open-world playground. That formula has certainly worked numerous times in the past, and it could have also worked for this Flash game that developer Brash Entertainment worked on starting in the mid-2000s.

While Brash went under in 2008, they took this potentially amazing project with them. Reports about this game’s development, as well as some early test footage, suggest it was an appropriately fast-paced open-world epic that dove deep into the Flash’s lore and even featured a kind of Sunset Overdrive-style navigation system that would have let The Flash pull off elaborate tricks. Someone really needs to mine this project for its best ideas and revive them in some form.

We’ve talked about this game extensively in the past, but what you really need to know is that there was supposed to be a game based on Christopher Nolan’s Dark Knight film and that game was shaping up to be pretty ambitious for a licensed title intended to debut alongside the film.

Unfortunately, The Dark Knight’s ambition may have gotten the best of it. The game missed its initial release windows and was ultimately determined to be more trouble than it was worth. While I’d still love to play this game, I don’t know if it would have been nearly as brilliant as Rocksteady’s Arkham series.

Aside from cameos in DC fighting titles and the so-so Green Lantern: Rise of the Manhunters, the Green Lantern hasn’t exactly gotten a lot of video game love over the years. That makes it that much more of a shame that the Green Lantern almost starred in a SNES action game that was not only almost finished at the time that it was canceled but actually looked pretty good.

Actually, the game’s cancellation seemingly had nothing to do with the quality of the game itself. Reports suggest that the game was ultimately canceled due to the rise of the Sony PlayStation (and the start of next-gen gaming) as well as conflicts between DC and developer Ocean Software regarding how this game should handle ongoing aspects of the Hal Jordan storyline.

Well, “comic” is probably more appropriate than “superhero” in this instance, but it’s hard to have this conversation without mentioning the 100 Bullets game we never got to play. Not only was this game based on a hot (at the time) comic property but everything we’ve ever heard about it suggests that it could have been a worthwhile entry into the post-Max Payne era of third-person action titles.

Sadly, the decision to cancel this game ultimately came down to money. Publisher Acclaim Entertainment’s rapidly deteriorating financial situation spelled the end for 100 Bullets and most other projects the company planned to publish at that time. There was brief chatter about a possible revival, but nothing ever came of it.

In the late ‘90s, Neversoft Entertainment (developers of Tony Hawk’s Pro Skater) started working on a Ghost Rider action/adventure game that combined elements of 2D and 3D design. It was basically a Castlevania-style action game from the studio that eventually brought us that amazing PS1 Spider-Man title. The only known footage of this title is pretty rough, but it certainly looked promising.

In fact, this is another one of those instances where the game’s eventual cancellation has nothing to do with how good it was. Ghost Rider was supposed to be published by Crystal Dynamics, but reports indicate that Crystal Dynamics decided to get out of publishing before the game could be completed. Neversoft apparently tried to approach them to work out a new deal, but rumors suggest the company just wasn’t interested in funding a 2D action game at that time.

Remember that Justice League movie George Miller was supposed to direct that was ultimately canceled due to budget concerns? Well, it turns out that developer Double Helix once worked on a loose video game adaptation of/tie-in to that film. It was going to be a third-person action game with a DMC-like combo system that, you guessed it, was canceled around the same time as the George Miller Justice League movie.

What’s really interesting about this one, though, is that elements of this project were eventually spun off into the Green Lantern: Rise of the Manhunters game we mentioned earlier. While that title offers a rough look at what this one could have been, reports suggest Justice League: Mortal was a much larger and more ambitious game.

It’s hardly a surprise that Daredevil is arguably the most talked about canceled superhero game of all time. After all, an open-world Daredevil game that properly utilizes the character’s abilities while diving deep into his comic book lore is something a lot of fans would probably still play today.

With this one, though, the story isn’t so much that it was canceled but rather that the project made it as far as it did. Reports about this game’s development suggest that it wasn’t only an overly ambitious technical nightmare, but that the stress of working on this title led to a sharp decline in morale at developer 5000ft Inc’s offices and may have even resulted in a rise in substance abuse issues among the studio’s employees. Marvel eventually decided to pull their support for this one due to a litany of problems and disagreements.

Yes, there was a time when someone was bold enough to pitch a steampunk Batman action game based on the famous Batman story of the same name. Early footage of the prototype for that concept even suggests that its gameplay would have fallen somewhere between the Arkham titles and Bloodborne.

“Pitch” and “prototype” are ultimately the keywords to keep in mind here, though, as it sounds like Gotham by Gaslight never made it further than those very early stages. This feels like the kind of game that would be easier to find funding for today, but at this point, it sounds like it will forever be a “what could have been” situation.

Throughout the…dodgy history of Superman video games, most fans of the character have cried out for an open-world Superman title that captures the awesome potential of the character’s abilities without reducing Superman to a wrecking ball. Well, developer Factor 5’s Superman: Blue Steel was supposed to be that game.

In fact, Blue Steel lead designer Salvatrix recently shared new details about the game via Twitter that all confirm reports people had been hearing for years regarding this project’s potential. Unfortunately, she also confirmed that this game’s cancellation ultimately came down to the market crash that hit at the time and how it left the team without the resources and support they needed to complete their vision.

What you really need to know about Spider-Man Classic is that it was supposed to be the follow-up to the largely underrated 2009 game Spider-Man: Web of Shadows. The basic idea is that it would have seen Spider-Man and Wolverine team-up to battle new and old foes as Spider-Man relieved some of his most memorable moments from the comics throughout the years. Yes, it probably would have been amazing.

Spider-Man Classic was unfortunately canceled when developer Shaba Games was shuttered in 2009. While we ultimately ended up getting the incredible Spider-Man: Shattered Dimensions as a result of this cancellation, I chose to believe there’s enough room in this world for both.