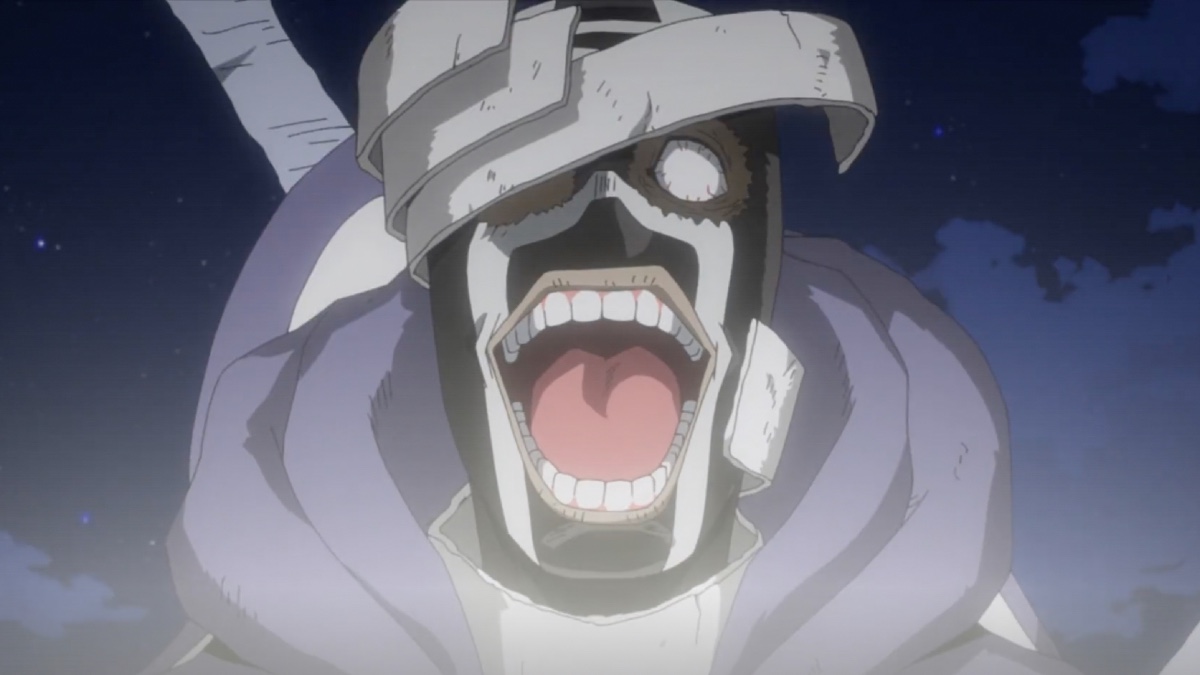 “The sole thing a person gets to choose impartially is how his life ends.”

The concepts of fate, justice, and agency are always crucial tenets in My Hero Academia, yet these principles are placed under intense scrutiny in “The Unforgiven” when a face from Endeavor’s past returns and threatens to destroy his heroic advancements. Whenever it seems like Endeavor’s redemption arc reaches a satisfying and cathartic conclusion there are suddenly more skeletons from his closet that tumble out that he needs to manage. This is worthwhile development for the tortured character and it’s enough to finally turn those that are ambivalent towards Endeavor into fans. This has been the subtext to the entire season, but it’s the driving force behind the events in “The Unforgiven,” which is of course a title that refers to Endeavor and his cavalier past.

“The Unforgiven” jumps between the past and the present, but in a way that naturally introduces the fresh conflict at hand. A Cape Fear-esque villain named Ending emerges and he doesn’t just recent Endeavor’s success, but for years he’s obsessed over him and how to best systematically ruin his life. This development becomes considerably more tense because Endeavor barely remembers this lunatic, whereas Ending can’t do anything but focus on his revenge plan against Endeavor. This makes Ending’s goal oddly tragic to some degree. The way in which he expresses his rage and frustration is obviously unacceptable, but the lack of impact he’s had on Endeavor’s life does reinforce the villain’s twisted ideologies to some extent.

Endeavor’s redemption is still a work in progress and it initially seemed as if the reemergence of Toya Todoroki would be how Endeavor must face his past sins and truly move on. However, the addition of this extra rogue individual who directly relates to Endeavor’s less polished past and has zero interest in any of the hero’s recent rehabilitation turns him into an even more exciting obstacle. My Hero Academia really wants Endeavor to fight for his redemption and it’s given him more to overcome than anyone else.

It’s true that the role of Number One Pro Hero isn’t anything to take lightly, but at this point Endeavor has had to overcome more than All Might and many other Pro Heroes. This season has largely been about characters coming out of their comfort zones and learning to open up and trust new people. Endeavor isn’t always the focus, but these lessons are more applicable to him than any other character. “The Unforgiven” begins to examine what happens when Endeavor overextends himself and doesn’t follow his own advice that he preaches to his Hero Agency.

The flashbacks in “The Unforgiven” strengthen Ending’s motives, but they also provide greater context on Toya Todoroki and how the rest of Shoto’s family still carries internalized pain from Endeavor and the lasting damage it’s left on Rei, Shoto’s mother. Natsuo, Shoto’s older sibling, basically considers Toya dead to the family and that Endeavor is directly responsible for his absence. It’s Natsuo’s harsh words to his father that inevitably trip up Endeavor in the height of battle and leave him vulnerable.

Endeavor is the Number One Pro Hero who has been able to withstand incredibly dangerous Quirks, but nothing is more debilitating than the harsh words of his own children. Endeavor freezing on the battlefield is a powerful moment that’s only topped by his loving hug to Natsuo once everything is over. Endeavor seems genuinely scared and grateful. He knows that his family is important to him, yet in this instant Endeavor finally understands just how much power they hold over him.

Everything about Ending works really well, even if he’s more of a catalyst for change than anything else. His animosity could have been seeded in the background of previous seasons, but My Hero Academia continues to juggle so much at once that it’s an acceptable omission. This new villain comes out of nowhere, but “The Unforgiven” does its due diligence to provide the proper context and backstory for this fresh threat. Ending’s manipulation of lane markings on the street is also such a simple, yet arresting Quirk.

“The Unforgiven” crams a lot of Ending into just one episode, yet he operates in such an atypical manner that none of it feels forced. It’s an excellent change of pace that he targets Endeavor’s family–as a way to better dismantle Endeavor’s public image–rather than directly attack the hero. Ending’s ambush also hits harder because the villain used to truly admire Endeavor until he began to resent him and his privileged life. He’s essentially My Hero Academia’s equivalent to Frank Grimes from The Simpsons. Ending cannot understand why his life is an embarrassing mess in contrast to Endeavor’s and so he’s determined to re-balance the scales and leave Endeavor with nothing.

The climax of Ending’s plan is more twisted than most villainous plots that My Hero Academia explores. Ending is so broken that he wants to push Endeavor to the point of killing him, which will not only bring him a strange sense of peace and control over his wasted life, but it will more importantly demolish Endeavor’s ideals as the Number One Pro Hero. He forces him into an impossible ultimatum where the safety of his family is leveraged against his reputation as a hero. It’s obvious that Ending is going to be eliminated either way, but he still accomplishes his goal with whatever decision Endeavor makes. It’s the plan of a truly desperate individual with nothing to lose, but that’s exactly why it makes such an impact here.

Endeavor is often able to put on a brave face, but when he’s presented with Ending’s scheme he looks absolutely terrified for the first time in the series. All of Endeavor’s growth and progress is irrelevant in this moment where Ending forces him to become a puppet that’s no different than the role that this villain has fulfilled in society. Ending goes from idolizing to demonizing Endeavor, but in this tense moment the two individuals are the same.

Endeavor has a lot to worry about at this moment, but naturally Midoriya, Bakugo, and Shoto all lend a hand against Ending. Their plan is to alleviate some of the pressure off of Endeavor, only for them to completely take over the operation. It’s fantastic to see how well these three work as a team and the shorthand that they’ve all established during their brief time together at Endeavor’s Hero Agency. The slow motion segments where these heroes jump into action while Endeavor’s heroic advice echoes in their heads is so powerful and visually gorgeous. It’s also kind of hilarious that through this battle Ending continually chastises these “work study kids” for “ruining his death.” It’s not that this character wants to die, but that he specifically needs Endeavor to snuff out his flame.

All of the heroes excel during this peril. They not only save Natuso, but they completely minimize the rest of the casualties in the area. Midoriya is even able to make effective use of his volatile Blackwhip Quirk while in the heat of the moment. It’s such a touching and inspirational sequence that makes up for Endeavor’s panic. If anything, the altercation is even more effective because it proves that Endeavor has done great work with his students and that they’re fully capable of picking up his slack. Society still needs a Number One Pro Hero, but it’s reassuring that in a pinch his protégés can still get the job done. It’s maybe time for U.A. High to appoint a new Big Three after the work that Izuku, Shoto, and Katsuki do during the Ending incident.

Once the action begins in “The Unforgiven” it doesn’t stop, but the first half of the episode is able to probe these characters in a more subtle manner. Bakugo barking a request for some of the Todoroki family’s recipes is just excellent and it’s another reminder that these characters can sometimes work best when they’re not involved in high stakes battles, but rather just in normal situations. In many ways, these characters now feel more like heroes than they do teenagers, so it’s always appreciated when their more juvenile instincts get to rise to the surface instead of battle strategies.

That’s not to say that My Hero Academia should indulge in a bunch of relaxing filler episodes, but it’s helpful how this season effectively explores the duality of these heroes and doesn’t forget that they’re still human. Bakugo also needs to immediately spend more time with Endeavor’s chauffeur. These two explosive personalities are required to be locked in a room together and be given a whole bottle episode where their tempers can flare.

“The Unforgiven” is one of the strongest episodes of this season of My Hero Academia and it’s the crowning achievement in the anime’s repeated efforts to redeem Endeavor. “The Unforgiven” continues the ideas and themes that are addressed in the previous episode, but there’s enough of an unique story here that justifies why this material isn’t just combined together with last week’s conflict. The development of Midoriya, Bakugo, and Shoto as heroes continues to delight, but it’s Endeavor’s simultaneous vulnerability and strength that makes this installment such a success. It’s the perfect mix of action and emotion, which authentically triggers change that’s difficult, but necessary.

Darkness may never go away in My Hero Academia, but at least the heroes are more prepared than ever to keep the lights shining bright.