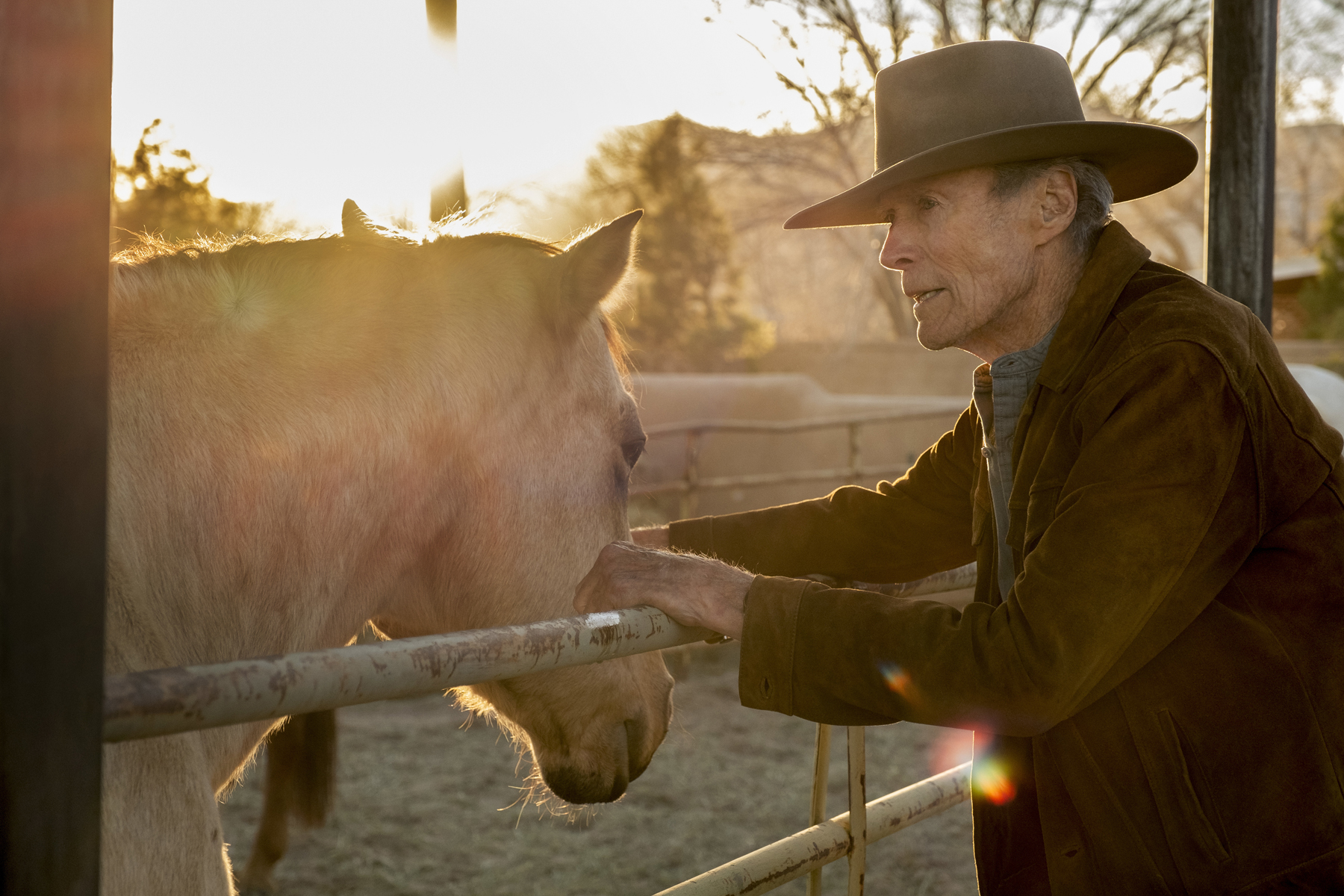 The strangeness of Clint Eastwood’s Cry Macho cannot be boiled down to any one thing — there’s a lot going on — but its origins as a movie, one starring and directed by this particular Hollywood figure, no less, are surprisingly scattered. In so many ways, the movie plays like a straight shot of Eastwood on Eastwood, an act of summary, revision, and rhyme that almost could have been shocked to life by Doctor Frankenstein. Its components — its tropes and genre scaffolding, its shambly yet economical ease, so characteristic of the director’s work of late — make it hard for anyone familiar with Eastwood’s filmography, particularly his work behind the camera, not to think of everything that’s come before it. Eastwood is in his nineties now, so to some degree every new film he makes can’t help but feel like a culminating work, a knowing act of self-reflection; we expect nothing of our elders if not the capacity to look backward at the vast landscape of a life, rather than forward, where — well. We assume there must not be much on that end of the spectrum to see.

We’re wrong about that. But Cry Macho nevertheless bears all the marks of a film looking backwards, dredging up old routines, seeing how they play out now that the Eastwood of yore isn’t quite that man anymore. The movie doesn’t exactly discourage comparisons to Eastwood’s ongoing cinematic obsessions. It’s A Perfect World (1993): a story of a man, a child, a kidnapping plot, and an overriding antithesis to the easy signaling of goodness or evil that any of that might imply. It’s Gran Torino (2008): Eastwood the man playing on the idea of Eastwood the icon, with the additional, extraordinary hurdle of race and cultural differences being mapped back onto the history of that icon. It’s The Mule (2018): rueful to the point of verging on meta-textual, loose in the limbs, self-aware with a question mark — the work of a late-career veteran whose primary concerns now are not with clean, classical, realistic dramaturgy or auteurish fussiness, but rather simply telling the story. Getting in, getting out, going home, and then somehow emerging with an unplaceably odd, ideologically vexing piece of Hollywood art anyway.

All of that’s bubbling about in Eastwood’s new movie. And somehow, there’s room for yet more. Because Cry Macho also feels of a piece with any number of Eastwood’s films about the perils of notoriety, a subject he’s uniquely qualified as a director to explore. Everyone’s an “icon” nowadays — fine. But surely there’s some VIP lounge among even that sacred echelon for people who are sincere, indisputable visual and cultural icons. People who’ve cut an inimitable figure into the big-sky horizons of the culture. That in itself wouldn’t explain why, since his very first outing as a director (Play Misty for Me), Eastwood has returned, again and again, to the situation of fame, of legend. But it’s maybe one reason that his movies have had more of interest to say on the subject than most other movies. We could be talking about the hero of Unforgiven, whose violent reputation precedes him at first like a curse, then like a promise; or the more recent Sully, with its reluctant hero, very much a man who sees himself less as a savior than as a person who acted on human and professional instincts, but who gets drawn before the firing squad of public scrutiny regardless, impelled to explain those instincts.

We could keep going — Bronco Billy is at least worth mentioning — but the point is that Cry Macho looks like a duck, talks like a duck, and is therefore a Clint Eastwood movie. That it was once almost an Arnold Schwarzenneger movie, and before that, a Roy Scheider vehicle; that Eastwood originally turned the project down, in the 1980s, to instead make a Dirty Harry movie; that the movie really only exists, in the grand scheme of things, because the 1975 novel on which it is based, written by N. Richard Nash, became a novel after studios rejected it as a script — all of that’s interesting. But it’s not as germane to strange feelings Cry Macho gives you with shots as simple to describe as Clint Eastwood on a horse, wearing his age but not succumbing to it. Or of Eastwood trading light verbal punches with a wise-ass young’un whose prized possession is a cock named Macho.

Eastwood stars as Mike Milo: once a rodeo icon and skilled horse trainer, now a has-been being fired in the opening scene of his own movie. His boss, Howard (Dwight Yoakam), lays it out in a ramble of a monologue things you sense he’s wanted to say for some years. Mike’s a nobody now. There was an accident; there was, separately, a tragedy. Then came drinking, drug abuse — you know how these things go. He is now an inconvenience. Until he isn’t. A year after the firing, Howard needs a favor. It’s a strange favor in any light — would you please, kindly, travel to Mexico to kidnap my teen son, whom I have not seen since he was six, from his abusive mother? — but for Mike it bears the additional pressures of his being washed out and, worse, of his not being able to say no. He owes Howard one, what with the long-term employment post-fame and all.

So it’s a movie about a kidnapping — but, Mike has to assume, one undergone for good reasons. When Mike lands in Mexico City, most signs point to the boy in question, Rafo (Eduardo Minett), being only too happy to leave. People say he’s a bad egg. He runs the streets, he claims by contrast, because “all the bad stuff happens at home.” His mother Leta (Fernanda Urrejola) strikes an odd (generously), troubling (more frankly) chord in her characterization, pivoting from knowing power to seductive desperation, the sum of which is ultimately that Rafo is better off. Would you be surprised to learn that the same can be said of his father? But never mind — the old man, the kid, and the kid’s beloved rooster make their way, and the things that are supposed to happen between them, in a movie like this, more or less happen.

They happen at a surprisingly slack, easygoing pace, expanding beyond our central pair to encompass a world of danger (by way of federales and who-knows-who else) and a bit of tender loving care from a kindly woman named Marta (Natalia Traven), whose generosity bespeaks something close to genuine virtue. There’s much more than can be said about the what and who and why of it all, but what’s satisfying and interesting about Cry Macho really does boil down to these essences. The movie ambles tonally between immediate danger and lackadaisical discourse, allowing most of all for an intent focus on the sudden spring of new, unexpected pleasures, the kind that a seen-it-all man like Mike doesn’t seem to have imagined were still ahead of him. The plot of Cry Macho is straightforward: Mike and Rafo make their way part-way, then take shelter in strangers’ kindness, and all the while, uncertainties — police — circle them like vultures.

A new, good life brushes up against the agonizing reality of this being a hunt, not a vacation: the realization that what’s good must in fact be temporary. Mike falling in love; Rafo finding a place that feels like home — of course these things cannot last. Cry Macho is unabashed in its sentimentality, to the point of being almost too swift about it. Suddenly, Mike and Marta are dancing, and it feels too good to be true, which it is. It’s the sentimentality that makes the movie work; Eastwood has never shied from making a male weepie, and less so from rending the fact of his own age into a dramatic problem. The script (co-written by Nick Schenk and N. Richard Nash) at times has a prime-time movie literalism. Eastwood is at a point in his career where a bit of processed cheese in the script has hardly proven to be a reason not to use it. In this movie’s case, the story’s tonal switcheroos will undoubtedly, for many, prove suspect; it feels off, it feels corny.

But it also feels pleasingly hands-off. The movie’s showing us where we ought really to be looking, and it’s not at the most implausible scenes or unsatisfying bits of plot maneuvering. It’s at the twinkle in Eastwood’s eye, shots of which hit at precisely the right moment, that reveal a world of experience. And at Mike and Rafo’s unencumbered comfort with each other, which outweighs the words stuffed into their mouths much of the time. It’s also at the swirling indiscriminate quality of the police and similar authorities, who are characterized from the very start — in the moment that Mike crosses the border into Mexico — as equal parts powerful and ineffectual. Detached from their power is any sense of actual moral authority. It’s all for show, and not for the first time in an Eastwood picture, though like in Richard Jewell and The Mule, the show is terrifying enough.

That’s an idea worth sitting with. It marks a throughline, sometimes more obvious than not, in Eastwood’s career as both an actor and director, ranging from the nameless vigilante of Sergio Leone’s Westerns, who was his own authority, to the tragic overstepping of the cops in A Perfect World and the pestering government officials in Sully. The idea is one of virtue — as distinct from heroism or even moral or political goodness. And virtue, Cry Macho and other Eastwood movies tell us, is all the more striking for feeling so rare. It feels a bit out of fashion, especially as Hollywood movies have defined it over the years, and most especially as Hollywood movies of the terrain Eastwood is identified with, like Westerns, have defined it.

Virtuousness in Eastwood’s films is wholly distinct from the question of who’s wearing the badge, who has the authority. Look at the awkwardness, the utter lack of fashionability, of virtue as we saw it embodied by Eastwood’s take on Richard Jewell. Here is a man who, with unfettered, embarrassing, goofball hubris, acts out his desperate desire to be a cop by fraudulently pretending to be one; who as a lowly security guard gets cropped and crowded out of the social domain of real cops to the point of becoming a joke; and who, in the wake of an actual act of heroism, becomes not the hero, but the scapegoat.

In a moral universe so keenly prescribed as this, the goodness we see in Cry Macho — goodness that seems to come with age or, as in the case of Marta and Mike both, after great sacrifice — resounds even as, scene to scene, the movie feels shaky. The degree to which this proves satisfying will vary from person to person. But as a fact of the movie, as a straight line to its heart, it manages against expectation to add up to something. Cry Macho gives us two endings — one evenly bittersweet, the other more firmly to either side of the line. The endings themselves are maybe foregone conclusions. But the feelings they inspire defy the odds.