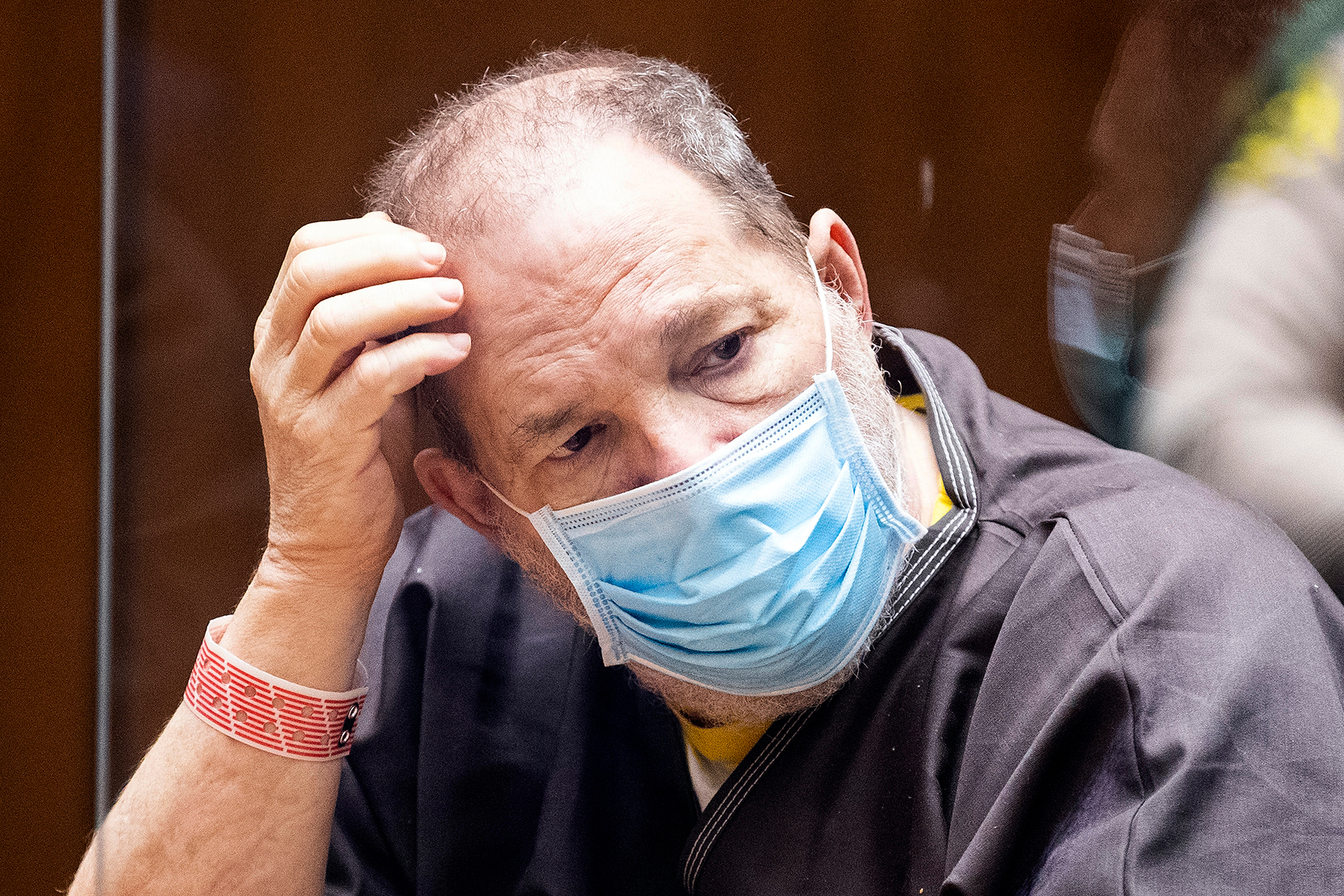 The disgraced movie mogul, who now lives in virtual isolation at the Twin Towers jail in downtown Los Angeles due to his notoriety and fragile health, was ushered into the courtroom in a wheelchair, handcuffed and wearing a brown jail uniform. His face was pale and stubbled, a white pandemic mask slung under his nose. Weinstein spoke only to waive deadlines and agree that his trial on 11 counts of sex assault involving five unnamed alleged victims could be pushed out as far as April of next year.

After the hearing, his defense lawyer Mark Werksman said Weinstein planned to fight the introduction of “numerous” uncharged acts and alleged victims.

“We’re going to try like hell to make sure he gets a fair trial, but it’s tough, especially when you have [prosecutors] basically training a water cannon of uncharged allegations at him,” Werksman told reporters. “They’re trying to throw everything including the kitchen sink at him, and we’re trying to limit the evidence so that’s it’s fair.” He also said that Weinstein is “obviously struggling” in prison: “He can’t walk and he can’t see. […] It’s very difficult for him to be incarcerated.”

The introduction of uncharged material — including dramatic testimony from costume designer Dawn Dunning and model Tarale Wulff — played a big role at Weinstein’s New York trial, which ended with his conviction for third-degree rape and first-degree sexual assault and a sentence of 23 years in prison.

In California, Weinstein is charged with raping three women and sexually assaulting two others during attacks at hotels in and around Beverly Hills between 2004 and 2013. He first pleaded not guilty to the 11-count indictment in Los Angeles County on July 21st, but his lawyers succeeded in getting one of the counts dismissed on a statute-of-limitations technicality.

The disputed charge, Count 5, involved the alleged sexual assault of a woman at a Beverly Hills hotel in May 2010. It represents the sole charge for Jane Doe No. 3, one of five unnamed alleged victims in the California case. When the count was first rejected on July 29th, Werksman declared a victory, saying the Los Angeles County District Attorney’s Office had failed with one-fifth of its case. The defense had argued that Count 5 fell outside the 10-year statute of limitations once prosecutors decided to go to a criminal grand jury with a new case number last spring, instead of sticking with the original April 2020 amended complaint that had been filed. (The grand jury route allowed prosecutors to bypass a public preliminary hearing in the sensitive and high-profile case.)

When she first rejected Count 5 in July, Superior Court Judge Lisa Lench said prosecutors could try again, and, on Monday, she took Weinstein’s new plea to a third amended indictment handed up August 18th. The new indictment includes specific language stating the grand jury understood the timing issues and agreed its indictment on Count 5 was part of a continuing prosecution.

Werksman told Rolling Stone after the hearing that the defense might file yet another demurrer seeking to dismiss Count 5. “The statute of limitations is still the issue,” he said. “We’re going to look carefully to see if they got it right this time.”

The DA’s office filed its first charges in the underlying case on January 6th, 2020, just as jury selection was getting underway at Weinstein’s New York criminal trial that ended up becoming a landmark #MeToo conviction. On February 24th, 2020, a Manhattan jury found Weinstein guilty of the two felony sex crimes: raping aspiring actress Jessica Mann at a midtown Manhattan DoubleTree hotel in 2013 and forcing oral sex on production assistant Miriam Haley in his SoHo apartment in 2006. He was sentenced on March 11th, 2020, just days before Covid-19 lockdowns took hold around the country. Weinstein appealed the New York conviction in April, two months before he was extradited to California.

More than 80 women have accused the fallen Hollywood titan of sexual misconduct, saying he regularly wielded his status as an industry powerbroker to lure them into vulnerable positions and attack with seeming impunity. Weinstein has repeatedly denied all allegations of nonconsensual sex.