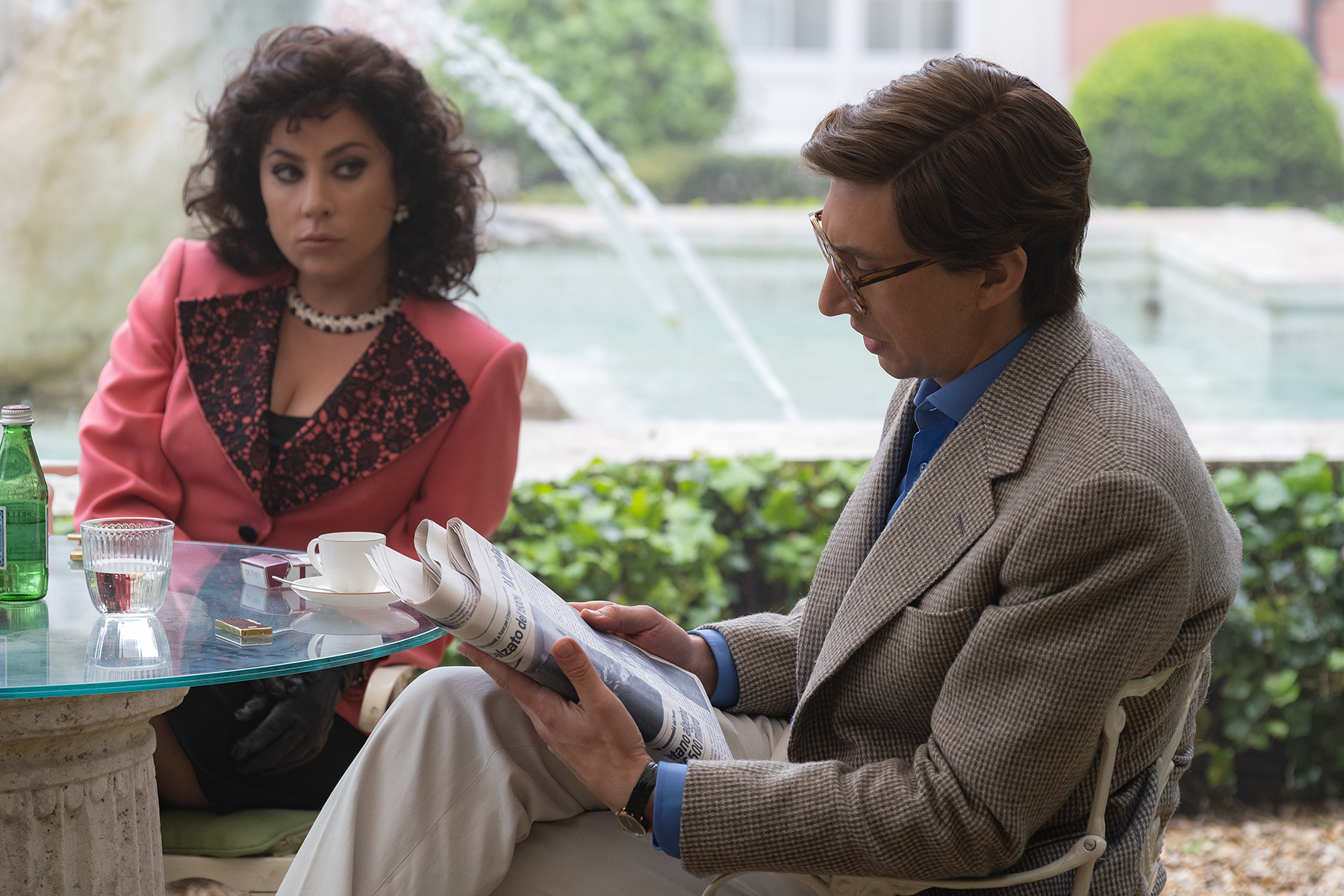 We can’t confirm the exact number, but by conservative estimates, we counted roughly a half-dozen different movies going on within the chic hallways and glamorous wings of House of Gucci, sometimes rubbing up seductively against each other and often colliding head-on, leaving everyone slightly dazed. A quick rundown:

-The true-crime story that’s the main narrative engine of director Ridley Scott’s haute-couture potboiler, revolving around the who, what, when, where, and why of the murder of Maurizio Gucci (played by Adam Driver) on March 27, 1995. It involves broken hearts, adultery, jealousy, public temper tantrums, a celebrity psychic, revenge, haggling with hit men and, ultimately, the former head of Gucci lying dead from gunshot wounds on the steps of his office building in Milan. In other words, it’s an extra-large glass of juice served with lots of pulp.

Toronto Film Festival 2018: ‘A Star Is Born’ Is Damn Near Perfect


The Broken Heart and Violent Fantasies of Lady Gaga

-A fable about the rise, fall, and resurrection of a fashion empire, detailing the various backroom deals, backstabbings and Machiavellian business moves that helped turn Gucci into a billion-dollar enterprise and also, according to end-credits disclaimer, an industry powerhouse that no longer involves a single person with the name Gucci. Leading us to…

-A family-feud melodrama, with numerous members of the famous Italian clan clawing and hissing at their relatives, then forgiving them until it’s time for the next bitchy, undermining comment or betrayal. Speaking of, how about…

-A Method-actor scenery-chewing competition, in which Al Pacino attempts to defend his wide-eyed, sound-normal-THEN-GET-VERY-LOUD crown against fellow Oscar-winner and up-and-coming contender in the category, Jared Leto. (You’ve likely heard about Leto’s prosthetics-heavy, spicy-ah-meatball portrayal of the cartoonish Paolo Gucci. If his performance is doubling as an audition for an upcoming Chef Boy-ar-dee biopic, he pretty much has a lock on the part.) Spoiler: The match ends in a draw.

-An eat-the-rich drama that reminds us that the one percent are not like you or me, no sir-ee, and that behind every great fortune is a crime, or two, or 12. Scott has dipped into this well before, notably with All the Money in the World (2017), his take on the 1973 kidnapping of John Paul Getty III in Rome. You likely remember that film for its impressive, last-minute substitution of Christopher Plummer as J.P. Getty the First after the original actor, Kevin Spacey, became… let’s say morally dubious. And were the late, great Plummer alive today, you can imagine a few parts here that might be improved by digitally inserting him into the mix.

And then there’s the tale of a woman scorned, and that movie is really the only one in House of Gucci that you need to concern yourself with. When that film takes over the screen, everything else cowers in its wake. Your pulse quickens, your pupils dilate, your hairs stand on end. You feel as if someone has just grabbed you brusquely by the lapels, shaken and open-palmed slapped you, and then planted a soul kiss on you. One person, and one person alone, deserves credit for turning this into something bigger than the sum of its disparate, conflicting parts, and occasionally launching it into the stratosphere. She was born Stefani Joanne Angelina Germanotta. You might know her by a different name.

Let us now praise famous Gagas: It is impossible to underestimate what Lady Gaga brings to both the role of Patrizia Reggiani, the daughter of a middle-class business owner who marries in to the Gucci family, and to House of Gucci itself. From the second she skids her car into a parking space and sashays across a dirt field — find someone who loves you the way the camera loves her strut — the lady owns the film. No one can be blamed for thinking the movie’s campier moments might originate from her, given the singer’s love of excess, spectacle, and the knowingest of winks in regard to her day job. And certainly, by the time the movie has her and Driver violently fucking on an office desk to the sound of opera, then smash-cutting to a wedding procession, you’ll feel that faith has been rewarded. Somewhere out there, John Waters is slow-clapping.

But that’s not what makes her the saving grace here. Gaga is the only person who seems to understand that the movie not only needs a well developed sense of irony and a tongue firmly lolling in its heavily made-up cheek — it also needs someone who knows when to take it deadly serious. The fact that she can do both at the drop of fashionable hat, along with a canny instinct for when to turn the star power on full-blast and when to play things closer to terra firma, keeps things giddy and steady. You’re not even sure her Reggiani is a gold digger at first, or if she’s playing some sort of long game when she engineers a meet-cute with Maurizio at a bookstore after they’ve disco-danced at a party. There’s a sense that this woman is actually in love, and so long as she’s got those Adam Driver-wide shoulders to lean on, everything will be fine. But once the now-Mrs. Gucci begins to see possible weaknesses in the family dynamic to exploit, and how it may be possible to deliver her husband what she believes is his birthright — total Gucci domination — you can see the gears moving. There are so many scenes in which Gaga simply sits back, and you see her eyes moving from person to person, taking everything in, calculating moves without ever turning Patrizia into some bad caricature of a villain or a dinner-theater Lady Macbeth.

And while some have glommed on to the fact that Gaga kept her accent for months on end as a way to keep the character in her head, it bears mentioning that her Italian accent is the only one that doesn’t strike you as forced, wobbly, or offensively outlandish. In fact, she’s often the only one who makes you feel as if you’re observing someone play a character, period. (To be fair, Driver is perfectly fine in the role of Maurizio, but it’s such a passive turn that you’re never sure whether he’s purposefully dialed down the expressiveness or there’s just not much to do with the role. When he finally throws a plate of carpaccio doing a brutal, corporate Brunch of the Long Knives, you’re just happy he’s shown any kind of emotion at all.) There’s a genuine sense of commitment on Gaga’s part to get it right. You forget you’re watching a pop superstar who once wore meat as formal wear. You only see a woman who’s found herself trying to outplay the rotten, aristocratic rich at their own game.

Then, once things go south for the couple and Patrizia finds herself slowly being squeezed out of everything, Gaga shifts into another register that draws from the great starlets of yesteryear — you can pick out a little Joan Crawford here, a little Simone Signoret there, a lot of mamma-mia! Anna Magnani and Sofia Loren everywhere — once she lets the Guccis know that she won’t be ignored. Yet she never loses sight of who Patrizia is, and why she might be driven to such bad-romance extremes.

There are people who star in movies, and people who are movie stars. Gaga already proved she belonged in that second category with A Star Is Born, which demonstrated she could carry a movie and didn’t have to rely on her stage persona for charisma. But she was playing a singer, naysayers said, so who knows if she’s got range or more than one great performance in her? We now have an answer. With House of Gucci, you get a jumble of stories jockeying for screen time, and then you get a supernova blazing at the center of all of it that burns everything superfluous away. If the film is remembered for anything, it’s for being Exhibit A as what a great actor she is. Forget Gucci. Long live the house that Gaga built.