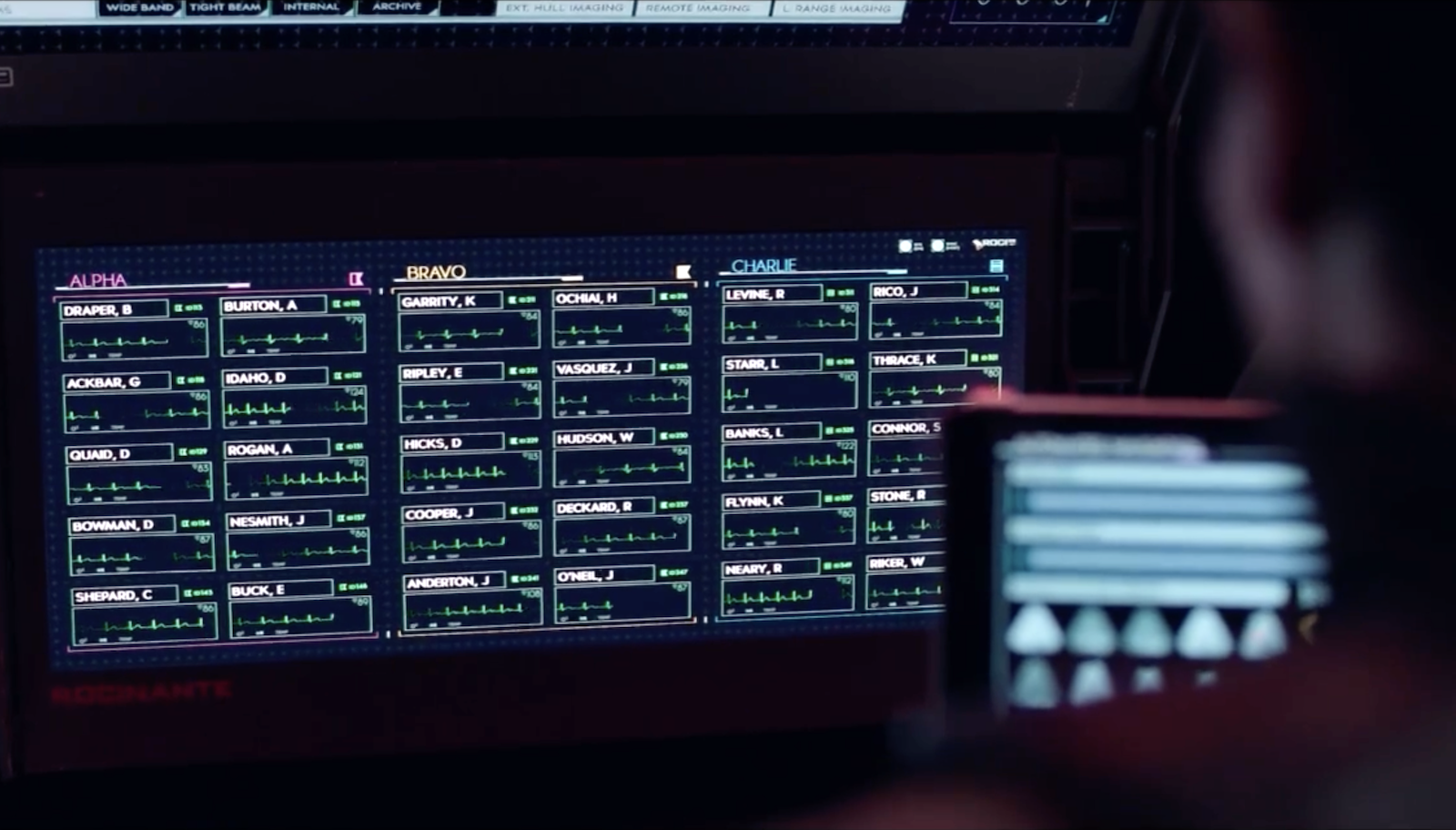 This The Expanse article contains spoilers.

As the coalition forces prepare to storm the ring station in The Expanse series finale, the Rocinante crew is running through its systems check, and voices are heard in the background signaling their readiness. “Thrace ready!” we hear, and our ears perk up. How unusual to share the name of one of the most badass space dogfighters ever, Kara “Starbuck” Thrace of Battlestar Galactica. When that’s followed by “Ripley ready!” all doubt is removed. Naming yet another famous spacefarer, Ellen Ripley of Alien, can’t be a coincidence.

Fortunately, fans of Easter eggs like this are provided with a quick glimpse of the roster on Naomi’s screen, and it’s filled with the great heroes of space science fiction in movies and television. It’s fitting that, as The Expanse makes its final bow, the “Great Hunt” of sci-fi culture appears to assist in the battle to end all battles. It’s easy, in fact, to spot the rest of Ripley’s team from Aliens: Hudson, Hicks, and Vasquez. So who else is among the assault team?

Joining Bobbie Draper and Amos Burton on Alpha team are the likes of Gial Ackbar of Return of the Jedi and Duncan Idaho of Dune. They’ve also got two video game characters on their roster: Edward Buck, the gunnery sergeant from Halo, and Commander Shepard of Mass Effect. Rounding out the list are Douglas Quaid of Total Recall, Alex Rogan of The Last Strarfighter, David Bowman of 2001: A Space Odyssey, and for some reason the fictional actor who portrays Commander Taggart in Galaxy Quest, Jason Nesmith, rather than Taggart himself. Go figure!

The aforementioned colonial marines from Aliens comprise a large chunk of Bravo team, which also includes a video game character: Jack Cooper of Titanfall 2. We also see two law enforcement officers on the roster: Rick Deckard of Blade Runner and John Anderton of Minority Report. Despite a misspelling in the last name, we assume J. O’Neil is Jack O’Neill of Stargate SG-1, but we’re still stumped about K. Garrity and H. Ochiai. Sound off in the comments if you know these two references!

We’re also not entirely sure who R. Levine is from Charlie team, so let us know! The highly qualified Starbuck is in this squad as is her fellow pilot Lucky Starr of Isaac Asimov’s book series of the same name, but this group also employs a linguist (Louise Banks of Arrival), a medical engineer (Ryan Stone of Gravity), a computer programmer (Kevin Flynn of Tron), and an electrical lineman (Roy Neary of Close Encounters of the Third Kind). Perhaps William Riker of Star Trek: The Next Generation, Johnny Rico of Starship Troopers, or Sarah Connor of Terminator 2: Judgment Day can lead this motley crew.

The inclusion of these great protagonists from science fiction classics feels somehow appropriate for a series finale, even though many of the soldiers who carry their names don’t make it. It’s as though The Expanse has rallied the best of the best to defeat the final villain of the series in spectacular, sacrificial fashion. As this beloved show joins the pantheon of space greats, the heroes of the past welcome our favorite Earthers, Martians, and Belters into the hall of fame. They will be gone but certainly not forgotten!

‘Peter Pan & Wendy’ Star Alexander Molony Signs with Atlas Artists
More Tory MPs submit no confidence letters as pressure to oust Boris Johnson mounts
Guardians of the Galaxy: James Gunn Has Tried Using Bug Three Times, But Hasbro Won’t Let Him
Meat Loaf in pictures: A look back at one of rock’s most iconic voices
Book Riot’s Deals of the Day for January 21, 2022