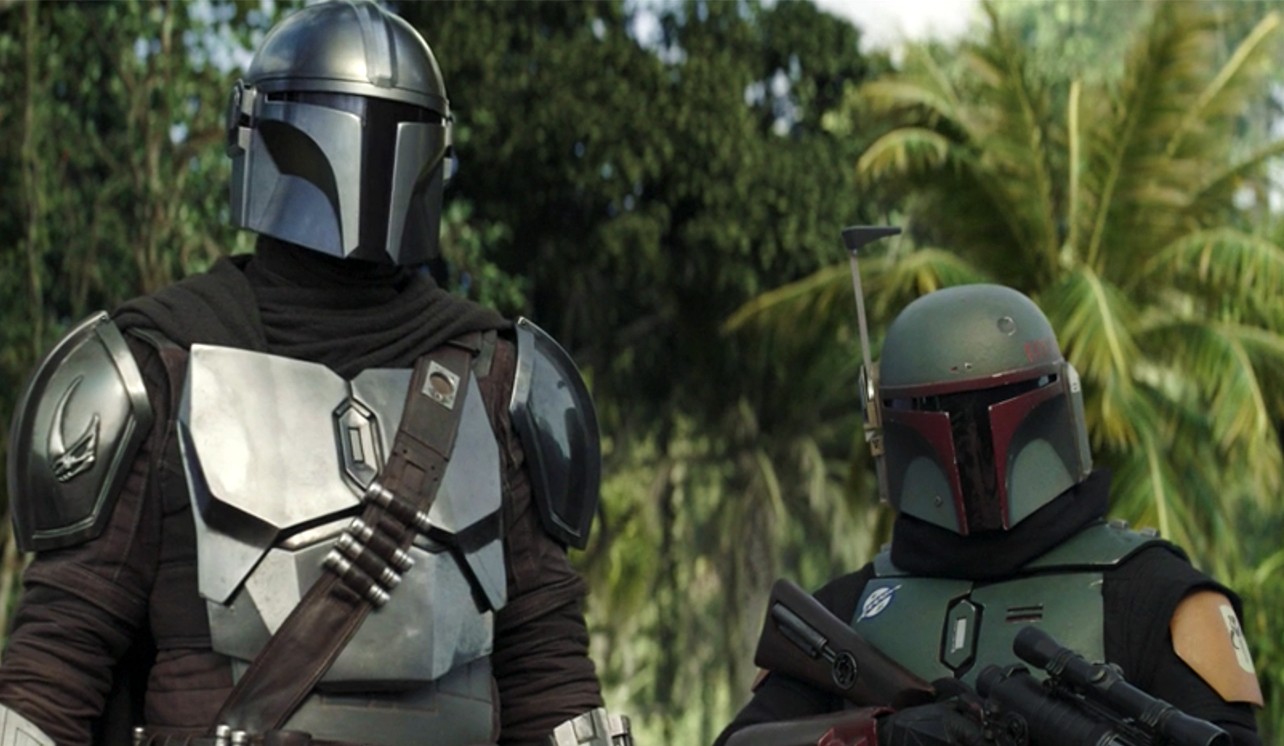 This Star Wars article contains spoilers for The Book of Boba Fett and The Mandalorian.

The Book of Boba Fett Chapter 4, “The Gathering Storm,” finally teased the inevitable: the return of Din Djarin (Pedro Pascal) to our TV screens a little over a year after we last saw him on The Mandalorian, this time to help Boba Fett (Temuera Morrison) and Fennec Shand (Ming-Na Wen) fight the Pyke Syndicate on Tatooine. The teaser is easy to miss — just a brief snippet of Ludwig Göransson’s The Mandalorian theme that plays as Fennec reassures Boba that they can get all the muscle they need with credits — but the message is clear. The moment you’ve been waiting for is almost here.

This isn’t surprising. Since Boba Fett found his armor and Luke Skywalker saved Grogu in 2020, most Disney+ shows have followed the same basic template of introducing big cameo appearances from popular heroes and villains during the second half of their seasons. The Mandalorian, WandaVision, Loki, and Hawkeye have all followed this structure to great success. But The Book of Boba Fett will be the first time the highly anticipated cameo comes from another Disney+ show.

Indeed, Din Djarin’s star has grown so bright in the last two years that it’s now possible he could be the biggest Star Wars character to appear in The Book of Boba Fett, outshining the beloved bounty hunter from the Original Trilogy. In fact, four episodes in, some fans would say the series has done more harm than good for Boba Fett’s legacy — so much so that some are begging for a character like Din or Grogu or an even more obscure Mandalorian character like Katee Sackhoff’s Bo-Katan Kryze to come in and right the ship with an exciting crossover. Could it be that over 40 years after his debut, one of the most popular Star Wars characters of all time is no longer the biggest Mandalorian in the room?

At the very least The Book of Boba Fett has made a good case for why the Disney version of this iconic bounty hunter can’t quite carry his own series. Would Boba Fett’s plodding show be more interesting if he were portrayed as the cold, ruthless villain we remember from The Empire Strikes Back and the old Expanded Universe, a true bad guy we nevertheless love to root for? It would at least help differentiate Boba from Din.

Instead, Disney has made Boba a nice guy, kind to his enemies even, forgiving, diplomatic. He’s spared the life of a bounty hunter who tried to kill him, made peace with Hutts who tried to take his throne, brushed off disrespect, and even offered to protect the other crime gangs in his city FOR FREE. In other words, this is a much softer version of the former villain that fits in better with Disney’s approach to redeemable bad guys, like the ones who often appear in the MCU.

So far this seems like a miscalculation that’s made Boba feel more like a clone of Din Djarin, a character he himself inspired, but without the benefit of Din’s captivating story of an orphan turned fatherly protector. (That Din’s adopted son is Grogu, the most talked about Star Wars character since the introduction of Darth Maul, also really helps.) Instead, this post-Return of the Jedi saga shepherded by Jon Favreau, Dave Filoni, and Robert Rodriguez has stripped Boba of key traits that made the character legendary in the first place.

In The Book of Boba Fett, we learn everything there is to know about what happened to the bounty hunter after his demise in Return of the Jedi, and in excruciating detail, from how he escaped the sarlacc, to how he lost his armor, to how he earned his Tusken Raider robes and gaffi stick, to how he met his partner in crime Fennec Shand, to how he got his ship back, to why he decided to become a crime lord, and the list goes on. Not only are these all details that could be inferred from his return in The Mandalorian, but the overexplanation of Boba’s backstory goes against one of the fundamental rules of Star Wars: less is more.

In 1977, George Lucas didn’t need to lift the curtain on every single aspect of his huge galaxy to make it feel lived-in and full of possibilities and places to explore. Part of the fun of early Star Wars was using your imagination to fill in the gaps yourself, such as who Boba Fett was under that menacing helmet and where he’d been before Empire. Of course, it was Lucas himself who later began the trend of going back and explaining the hows and whys of things that didn’t need explaining, like who Boba Fett was before he became a killer for hire. But that didn’t work for the Prequels and it doesn’t work for The Book of Boba Fett.

Needless to say, watching The Book of Boba Fett feels like reading a Wookieepedia entry in slow motion. What once felt shocking and exciting about Boba’s return in 2020, now just feels trivial after four weeks of flashbacks covering minute details about his journey to the present.

Meanwhile, Favreau and his team have done a much better job with the world of Din Djarin, a character who had a lot more to prove in 2019 than Boba ever did. From the very first synopsis and character image released for The Mandalorian, the big question was whether a second bounty hunter in nearly identical Boba Fett armor could step out of the shadow of his much more famous inspiration. Or was Din just destined to be Boba-lite on Disney+ while the real guy eventually made his way back to the movies? But just a few years later, no one would question Din’s bonafides as one of the most popular Star Wars characters of the Disney era.

Best of all, The Mandalorian team did it without having to dig too deeply into Din’s past. There aren’t any long flashbacks showing the first day of Din’s combat training or how he earned his original Mando armor. There isn’t a scene that shows Din taking on his very first bounty, or how he got the Razor Crest, or how he first learned about freezing his targets in carbonite, or how he met Greef Karga. All we know for sure is that Din was orphaned at a very young age during the Clone Wars but was taken in by a Mandalorian cult with traditions so strict it’s kept him from ever showing his face to another living being, let alone forming meaningful connections with anyone. Which is what makes Din’s relationship with little Grogu all the more powerful. Din cares so much about Grogu that he’s willing to abandon his beliefs and finally show the baby his face during their farewell. What little we do know about Din’s past is more than enough to serve the emotional pay off.

Even after all the flashbacks and explainers on The Book of Boba Fett, we’re still not even sure why those events inspired Boba to become a benevolent crime lord. In “The Gathering Storm,” Boba sort of implies that he wants to start his own clan because “one can only get so far without a tribe,” suggesting he learned a valuable lesson from the Tusken Raiders. But his behavior during his time in captivity at the Tusken camp doesn’t really track with the cold-hearted killer we knew Boba to be before this series, either. Boba lets them march him around in chains, torture him, and beat him, and all he seems to have to say about it is “it’s okay, mate.” He even helps them take back the Dune Sea from the Pyke Syndicate and joins the tribe as a full member! As much as I like how much deeper the show digs into Tusken culture, Boba’s forgiveness and congeniality doesn’t make much sense. It doesn’t even feel consistent with how the character was re-introduced on The Mandalorian, where he brutally murdered a whole platoon of stormtroopers just so he could get his swag back. Would that guy really be cool with you taking his freedom away?

Inconsistencies and lapses in logic aside, the extensive flashbacks and the protagonist’s cheery disposition have left The Book of Boba Fett spinning its wheels, and the fans waiting for something to finally happen. Daimyo Boba Fett refuses to pick a fight so there’s rarely a fight sequence in the present or any real villain to take down. He’s straightforward and honest when negotiating, so there’s no intrigue, backstabbing, or twists. A scene clearly meant to evoke The Godfather in episode 4 makes Boba look more like Secretary-General of the UN than Vito Corleone.

The acting isn’t the problem. Temuera Morrison and Ming-Na Wen are talented actors who display impressive physicality during action sequences. It’s fun to watch Morrison’s body language and demeanor change as he goes from diplomat to brutally beating henchmen into the sand, or the flicker of annoyance on Wen’s face when Fennec disagrees with Boba. They’ve tried to make the best out of the show’s stiff dialogue and long exposition dumps, but even the hints of charm and wit they’re able to sneak into this otherwise joyless affair aren’t enough. The Book of Boba Fett has failed them, too.

Fortunately, we’re in the endgame, which under Disney+ law means the show is now allowed to have some fun and bring in the cavalry of cameos. But this actually makes the current state of Boba Fett that much sadder. The Book of Boba Fett is so boring it’s going to take a completely different Mandalorian bounty hunter to save it.