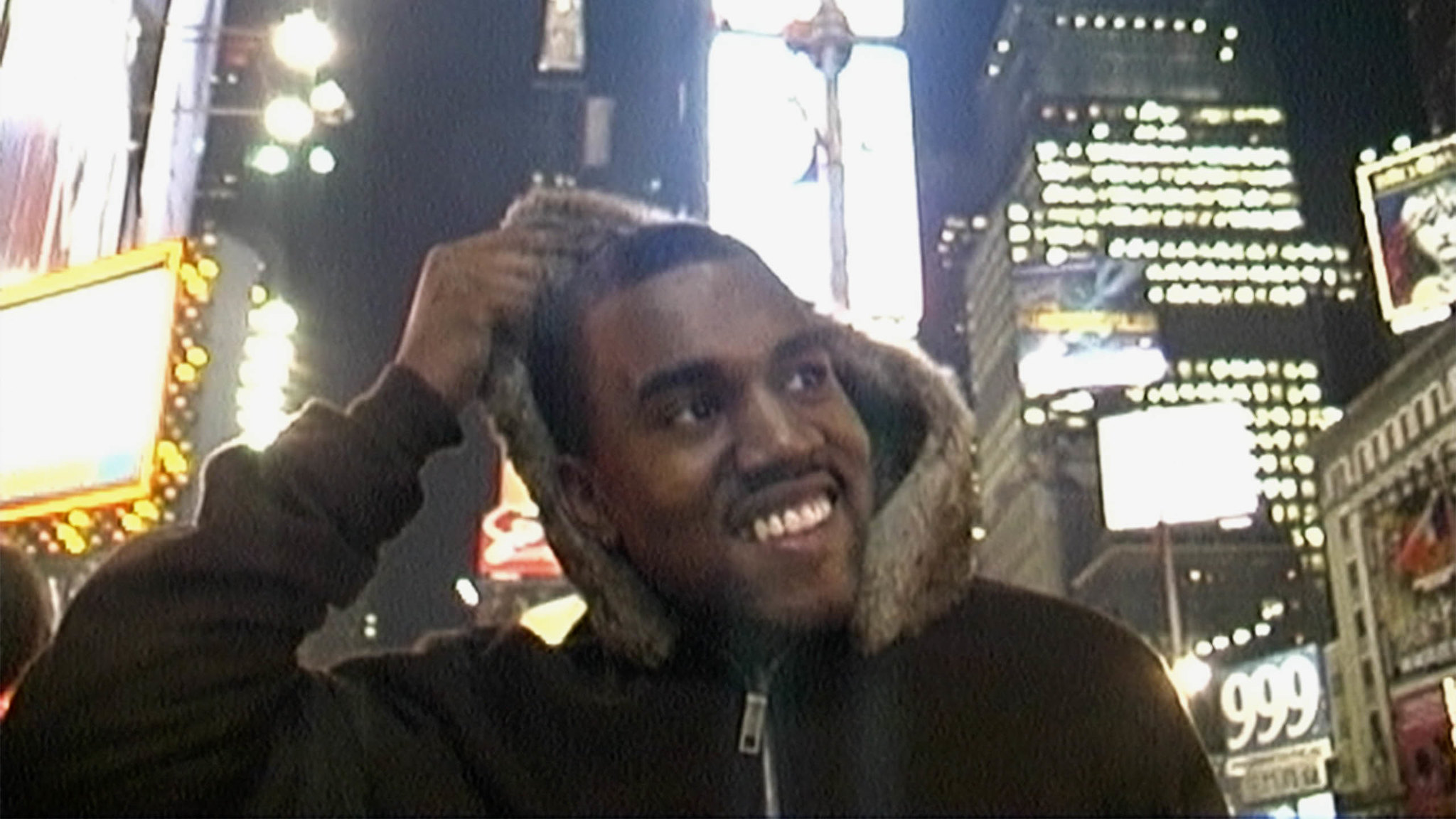 In the beginning, there was only the video camera and the birthday party.

Long before the endless album delays and perpetually in-progress tracks, before the eclipsing-the-main-event listening parties, before the beautiful dark twisted fantasies, before the tabloids and tantrums and meltdowns and fashion lines and presidential bids (but not before the ego trips — let’s be honest here), he was just a young dreamer from Chicago with a mouth retainer, mugging for the TV crew. As for the guy behind the camcorder asking him questions, that’s Coodie Simmons, a fellow Chi-town resident who hopes that the public-access cable show he hosts, Channel Zero, will get his nascent stand-up career moving. Still, he’s had a lot of hip-hop folks stop by to chat: Snoop, Run DMC, KRS-One. That’s partially why he’s at Jermaine Dupri’s soiree, talking to famous and soon-to-be-famous and would-kill-to-be-famous folks, including that dreamer. He’s Kanye, the handsome up-and-comer with the name he says means “the only one” in Swahili, trying hard to make that name mean something to people in the streets and at the record labels. He’s also the producer of a few tracks from the album by Harlem World. (You remember them, right? Were on Dupri’s So So Def label? Spring off from the Mase album? Featured Loon? OK, fine.)

Sundance: ‘We Need to Talk About Cosby’ Goes Deep on the Man, the Myth, the Monster

You never really know that you’re experiencing one of those life-changing moments until you look back at it years or decades later, and can clearly see where taking the road less traveled made all the difference, etc. But Jeen-Yuhs is already predicated on the fact that Simmons’ gamble paid off, for him and his subject — and for us. The birthday party is just the beginning of a long, beautiful friendship, and straight from the go, this is a tale of two leaps of faith: that Coodie would not only get something out of following Kanye to New York in 2002, but that they’d have a ringside seat to watching a major 21st-century artist break big; and that Kanye’s belief in himself and his talent would be enough to foster a career as a rapper in addition to being a producer. Everyone knows what happens next. Now you get to see the superhero-origin-story start of it all.

And judging from what the initial chapter of this “Kanye trilogy” shows — Sundance is gifting Coodie and his co-director Chike Ozah’s three-part look at the rise of Ye with a premiere, but only the first part; the whole thing hits theaters on Feb. 10th and drops on Netflix on Feb. 16th — it was a perfect combination of being at the right place at the right time with the right amount of hunger, drive, and bars. Kanye has established himself as a top-notch producer, especially after his beat helps turns “H to the Izzo” into a hit for Jay Z and he gets bragging rights of being on The Blueprint. He was already a big deal in Chicago, and people were starting to pay attention outside the Windy City. He could settle for just being the guy next to Just Blaze on the album credits.

But West has also got things he needs to say, and part of the rush of watching Jeen-Yuhs is not just seeing West prove his doubters wrong but hearing him demonstrate his already-in-place chops. He bum-rushes Roc-a-fella’s offices (this is before he gets signed to them) and loudly pumps a demo of “All Fall Down” for anyone who will listen. Sitting backstage at a Talib Kweli show, West and Mos Def start into what will become “Two Words,” and when Kanye picks up his verse — “Hey yo/two words/Chi town/South side/world wide” — the zero-to-60 ferocity and flow knock you for a loop. A peek in to the studio reveals Ye messing around with drill-sergeant samples and gospel choirs, and there’s the foundation for “Jesus Walks” in its infancy. Normally, these types of snippets are reserved for blips on a music doc’s radar, little bits to drop into montages to establish an artist’s “Eureka” moment. Here, the entire hour is nothing but these sequences. That, and the growing pains. There’s the MTV “You Hear It First” special, sure, but there’s also rejection, regional beef, frustration, a pep talk from Donda (who also does justice to rapping one of her son’s early compositions). It’s the 100-percent, uncut “set on his goals” Kanye. The struggle and the striving is real. And it’s a reminder that the full-blown jeen-yuhs was and is still human, even if Ye is still exercising his right to complete control-freakitude.

That’s what makes digging into this first hour so satisfying on its own, along with the time-capsule snapshot of hip-hop at a moment of flux as socially conscious, Lyricist Lounge-style rap butts up against Roc-a-fella’s Teflon, Hip-Hop Inc. corporate momentum. West is, in so many ways, the bridge between them both; right after he signs with Jay Z’s label, Gideon Yago breathlessly asks, “Is there room for a self-proclaimed backpack rapper in Roc-a-fella’s Bentley hit parade?” (The answer: Not right away, but soon enough.) There’s a lot of Coodie’s story in here as well, with him dropping in voiceover platitudes and his own home movies, reflecting on how documenting all of this turned a cable show host into a music video director into a filmmaker showing his three-part doc at Sundance before it becomes part of Netflix’s parade of content. Not all dreamers spit bars.

You just still wish the fest and the filmmakers had been able to show all of this in a single back-to-back screening, since Part One ends with West’s accident in Los Angeles that leaves him with a fractured jaw. So much is on the horizon: “Through the Wires,” chipmunk soul, a Hail Mary DIY pass, The College Dropout, superstardom, Grammys, Kanyemania, Kanye’s mania — Coodie is there for all of it, cameras rolling. Having pored through 320 hours of footage for a project literally 20-plus years in the making, the documentarians know they are sitting on a treasure trove. Dig through the gold of this all, and what strikes you is the sheer blood, sweat, and tears that went into making this career happen, much less go stratospheric. You may have issues with where Ye had ended up. But watch Jeen-Yuhs, and you can’t help but be impressed by how he got there.