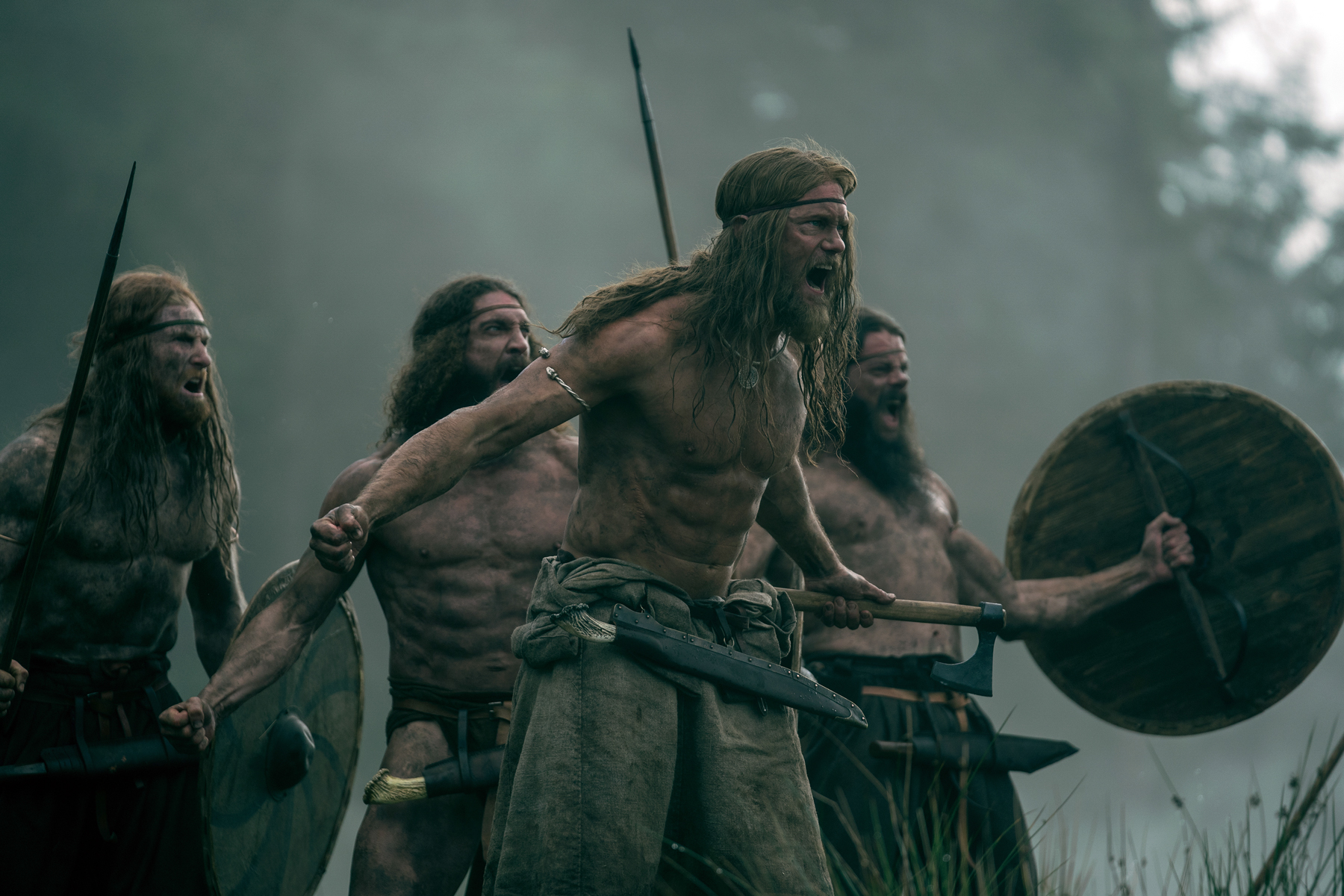 The Northman, Robert Eggers’ biggest and most expansive (and expensive) feature to date, is also his best so far. It’s an oft-stunning visual feast and an entertaining peek into Eggers’ instincts as a choreographer not only of historical detail but of bloody action. It is also an instructive example of how the most visionary intentions can’t always enliven an otherwise rote story. The Northman opens in AD 895, when Amleth, the Northman of the title, is a boy (played at this stage by Oscar Novak). But it is primarily set in 914, during the latter stages of the settlement of Iceland, before the establishment of a parliament. Lawlessness rules the way.  Spare us your wild West and give us, instead, your wild, ravenous, revenge-seeking North.


‘It: Chapter Two’: In Praise of Pennywise

Amleth’s father is King Aurvandill (Ethan Hawke), freshly home from battle — and suffering from an injury which, if not a mortal wound, has invited some dark reflection on mortality from Aurvandill’s part. “I watched his innocence tonight,” the warring king says to his wife, Queen Gudrún (an underutilized Nicole Kidman), of their son. It is time to initiate their boy into the ways of being king. So begins the first thrilling ritual we see in this movie. Amleth and Aurvandill crawl down into a cave, joining the fool of the kingdom, Heimir (a zany, senseless Willem Dafoe), in a howling, sputtering ritual of man-making, getting down on all fours like dogs as they inhale hallucinogenic smoke from henbane seeds and recite some of the sayings of Odin (the Hávamál).

Aurvandill’s sudden concern for showing his son the way of the throne in this rite is well-timed. Soon, the king will be betrayed by his brother, Fjölnir (a royally maned Claes Bang); an argument will ensue; Amleth will be rendered into an orphan, his mother into the unwitting queen of the man who’s stealing the kingdom from her son. Fjölnir, we learn, is a “bastard” — not in the line of succession. He also thinks Amleth has been, as they say, taken care of. He’s wrong.

Only three movies into his feature directing career, Eggers has rightfully earned a reputation for doing his research. The Witch, from 2015, was set in the New England of the 1630s, and seemingly every detail of its presentation, from the library-antique style and rhythm of its dialogue to the painstaking reconstructions of its built environments, sang with his obsessive attention to detail — so much so that it nearly overwhelmed the movie. For The Lighthouse (2019), set in the 1880s, Eggers spent a handsome chunk of the movie’s budget on the construction of an actual, 70-foot tall lighthouse, within and around which he set the movie’s strange, confined story. For that movie, Willem Dafoe had to learn how to knit. None of which is remarkable on its own. Actors acquire practical skills for movies all the time. And James Cameron built a partial model of the Titanic only to sink it. For this level of care to embed itself in our idea of the director, though, is something else — a feat of canny marketing, for one thing.

The Northman is, unabashedly, a revenge tale. Amleth the boy will become Amleth the muscled, scorched-earth man: thwarted Viking royalty who, you’d better believe it, plans to avenge what he lost. Alexander Skarsgård, who once played Tarzan, has done the mean, lean, shirtless warrior thing before. It helps to have an actor who makes the feat of this accomplishment feel plausibly heroic, perceivably vicious. The Northman will see him falling in with a group of Viking-era berserkers, sheathed in the skin of a wolf, before having an encounter with a seeress (a mystically appropriate Björk) who spells out the story of his fate. Fate takes him to Iceland, as an enslaved laborer, and he works his way up into Fjölnir’s confidence through his wits and might. He befriends and falls for Olga (Anya Taylor-Joy, who starred in The Witch and here, as there, drums up the sense of uncanny mystery that Eggers needs). Amleth communes with ravens and wolves, wends his way through a series of challenges to his will and his power.

The Northman is not a cliffhanger, exactly. You know where the story is going. You can also, from the bare outline of the plot, guess where it came from. Amleth is a historical Viking warrior, described in the 13th-century historian Saxo Grammaticus’ The History of the Danes. Amleth, the name, resembles Hamlet for a reason: Shakespeare was influenced by the violent hero’s story. This movie’s particular chapter isn’t in Grammaticus’ account, however. It’s more so a plausible missing chapter, which Eggers co-wrote with the Icelandic poet Sjón. Still, for a story dreamed up by its makers, it starts to bear some cumbersome familiarity. Even the challenges that fall into Amleth’s path, such as the acquisition of a uniquely powerful sword, are a little deadened by obvious outcomes.

Some movies can do this and not suffer for it. Northman’s cutting depth of detail almost longs for some fresh backbone of a story. The movie’s carefully constructed cliff-top forts and beauteous locales, its dangerous headlands and rolling green hills, are all so fecund — boons to the imagination. Eggers’ movie is best when it feels most complicit in that imagination: When it dives into its mystical visions and unnameable powers. Eggers abandons stylish modern crutches, like handheld cameras during his battle scenes, and instead resorts to smooth, eerie long takes, images that roam through the action, not with a sense of hands-off distance, but rather with a patient eagerness to lap up the sights, soak in the bloodletting. Nighttime scenes set outdoors are spookily drained of color and forced to evoke the wondrous, ominous purity of moonlight.

It’s disorienting. At times the movie tugs us back into its plot in ways that nearly disrupt the natural sense of curiosity Eggers makes us feel about this world. His sense of control lends itself to incredible, singular visions — a strong case, if nothing else, for selling edibles in movie theaters. Yet control winds up feeling, at times, like a limit. The story almost feels too linear for its visions: The attractive shock of the design demands plotless immersion — but wait, there’s an incesty plot-twist to get to, and wait, some of those people lurking in the background have got to die first. For a deeply violent guy, Amleth is actually quite morally grounded. He always has his reasons; even his time with the berserkers is intriguingly focused, constricted by his own moral restraint. His main identity, as a hero, is as a man who accepts his fate — owns it, lives up to it, trusts that what is meant to happen will happen.

In a recent profile of Eggers, the New Yorker claimed that The Northman might be “the most accurate Viking movie ever made,” and seems to mean this as a compliment. The truth is that Eggers pulls off something more interesting than accuracy, in part by abandoning what could ever possibly be known. The finer touches may or may not be rooted in historical truth, but their sum, at its best, can make your head spin. Ritual is, here as before in Eggers’ work, a grand occasion for the movie to pause, set aside the plot, and dive into the quirks and kinks and historial behavior. One of the best ideas in Eggers’ work to date is that the past is so much wilder than the present allows itself to be. That kingmaking ritual underground, between father and son, is a breathtaking feat of conceptual vertigo, a cascade of attractively nightmarish visions slipping down in front of our eyes like a reel of images. The costumes, the sets, the careful chaos: You could throw all of this onscreen and call it a movie, but Eggers routinely makes it feel flesh-born, equally grounded in the inconceivable and the plausible. You needn’t know that the crowns atop the royals’ heads don’t strictly fit the actual period to be taken with the curiosity of the choice. And even if you attribute the choice to style, rather than research, that style pulls you into the folds of a story that can almost feel too dangerous to watch. The violence gets gruesome. Children clubbed in the head, villages raided, homes leveled by fire, bodies battered by the elements. We don’t need to ask why we’re watching. In its own cruel way, it’s all so daringly fun.

What Eggers seems to know is that the tales of Grammaticus and others were tales spun in a Christian era, heavily reliant upon prior stories and myths but nonetheless distanced, by religion, from their more pagan roots. That gap could feel like a domestication of some more unwieldy spiritual power. Eggers wants to remind us that it’s all a little unhinged. The plot of The Northman does eventually make strides toward that what-the-fuckery, but the surprise comes from a couple of characters unexpectedly turning out to be freaks, which is perfectly fine for this movie. So much of Amleth’s tale is tied down to his fate (which is to say, Bjork shows up to predict the rest of the movie, and the movie proves her right) that by the time we’re seeing two men battle to the death within a volcano, we’ve learned to reorient our expectations. We’re so used to the fire and brimstone and predictable largesse of sword-and-sandals stories like these that it starts to feel like enough for a movie to simply amaze us.

More than anything, The Northman made me wonder what Eggers would do with a historically blank canvas, an act of storytelling divorced from old modes like the revenge plot or witchy self-discovery. This isn’t something that every obsessively detailed director makes us feel. It is, specifically, something that Eggers’ movies make me crave. More than his previous works — which also owe much of their power not to lived reality but to the disconcerting tug of mythology — Northman makes a case for what Eggers might pull off were he encouraged to drift even more completely into the realm of imagination. It’s the fantasies and visions that stand out. Less so the “story.” The Northman is as off-the-rails, internal, and speculative as Eggers has ever been. The craft speaks for itself. The next step for Eggers is to really let it fly.