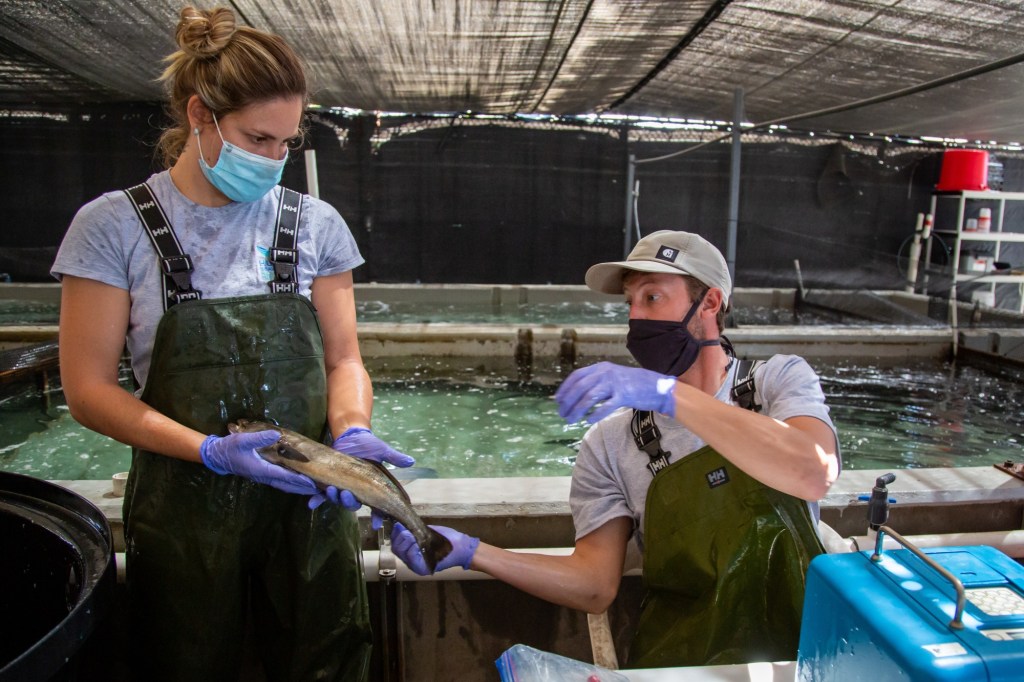 A new study by a team of fisheries scientists and geneticists indicates the number of white sea bass swimming in the Pacific Ocean that were cultured in a hatchery and released is likely higher than previously thought.

The research team tested genetic markers in tissue samples from 700 juvenile fish scooped out of the ocean specially for the study, and from ear bones of 50 adult fish caught off Mexico, to see how many could be traced back to the Ocean Resources Enhancement and Hatchery Program.

The program cultivates white sea bass in nurseries that are then released to help restore the wild population.

Of the fish tested, 46.2% came from the hatchery program – previously in a 2017 study by the Department of Fish and Wildlife about 1% of white sea bass caught were from the cultured hatchery.

“It’s still unbelievable,” the difference in the results, said Mark Drawbridge, a senior research scientist at the Hubbs-SeaWorld Research Institute, who manages the hatchery program and commissioned the study. “If they say the fish came from our hatchery, they say it with 99.99% confidence level.”

The testing was done by a team from the South Carolina Department of Natural Resources.

The hatchery program was established in 1983 in La Jolla after white sea bass had been significantly overfished and became endangered. It has since grown to include nursery pens of fish in 13 Southern California locations including Catalina Island, Dana Point. Huntington Beach, Newport Beach, Marina Del Rey and Ventura.

Each fish raised gets a metal implant in its cheek that helps identify the hatchery’s fish when they are caught. Anglers are asked to turn in the heads of their catches at local collection points so they can be scanned for an implant.

But not all fish heads are returned and sometimes the tags don’t register.

Of the 50 adult sea bass collected, 30% tested in the genetic study showed they originated from the hatchery, but none had the coded implant. Of the 700 juveniles, only 7% had the tags, but 46% were genetically positive of the hatchery program.

Now the hope is to use the study’s results – it still needs to go through the peer-review process – to justify more research into the program’s effectiveness and improve the hatchery program – and to pay the South Carolina researchers for their work.

The hatchery program is in collaboration with the California Department of Fish and Wildlife, which annually allots about $1.8 million toward its operations. About $1.5 million comes from the Ocean Enhancement Stamp required on annual California fishing licenses.

Valerie Taylor, an environmental scientist who oversees the program for Fish and Wildlife, said she expects to see the new study’s results later this summer, so she didn’t have a lot to comment on yet.

“I’m not sure we can really know how much additional funding will be needed for further genetic research,” she said.

She agrees the hatchery program has been groundbreaking “for marine species and has also made significant scientific discoveries in white sea bass biology and marine hatchery research.”

It also helped bring together angler groups and conservationists – teams of volunteers from fishing clubs help tend to the nurseries.

And the program has been an educational tool used with hundreds of Southern California school children.

Drawbridge said he pushed for the genetic study after discussing the 2017 results of the wildlife agency’s review with his South Carolina colleagues. Fishing groups were reporting higher numbers of sea bass in the wild and he had to believe it was because of the hatchery program, he said.

Given the significant difference in results, Drawbridge and his team will begin using a different method to test the returned sea bass heads to see which resulted from the cultivation efforts.

In the past, the heads were scanned, and if there was no implant detected, they were tossed away. The new plan is to keep all of the heads and send samples to the South Carolina researchers to test for genetic markers.

“If it’s a hatchery fish, we’ll get an X-ray and see if there is a tag that just didn’t beep,” he said. “Either the tag is no longer magnetized, or, if the fish is big, the tag may have gone deeper into the tissue or to another part of the head.

“We’ll figure out if it’s useful to still use the tags.”

Meanwhile, local groups growing the fish have been dumping new white sea bass into the ocean by the thousands.

The Balboa Angling Club in Newport Beach, which participates in the hatchery program through its Pacific Fisheries Enhancement Foundation, recently released about 5,000 fish, each about 15 inches long, into the harbor.

A handful of other angling clubs, along with the Ocean Institute in Dana Point Harbor, also participate.

Dave Edmundson, chair of the Balboa Angling Club’s foundation, said the recent study’s results “proves what we’ve been doing has had such an impact on the overall sea bass population.”

He said this year’s crop of recently release fish was among the largest.

Wayne Koltow, executive director of the Coastal Conservation Association of California, a fishing advocacy group that helps raise money for the Hubbs-SeaWorld hatchery program, is adamant the recent results should lead to more money from the state for research.

“It is more important than ever to have this program properly funded to continue its valuable work and gain important answers,” he said. “If we can prove the successfulness of this program, it could lead to expanding our efforts to other species in the future.”

Drawbridge already has his eye on the California halibut – another popular fish in Southern California that’s been heavily depleted.

“If we can demonstrate that white sea bass can be successful,” he said, “then let’s try it on another species.”

Angie Thomas’s ON THE COME UP Teaser Trailer Is Here
Researchers Uncover Ways to Break the Encryption of ‘MEGA’ Cloud Storage Service
The “Jesus Fish” & Eric Church’s “Sinners Like Me”: Topics For A Deep and Harrowing Discussion With A Four-Year-Old
January 6th Hearing Highlights Evidence That Matt Gaetz, Other Lawmakers Sought Presidential Pardons After Capitol Attack
PM not worried by reports Tory MPs could be plotting to oust him