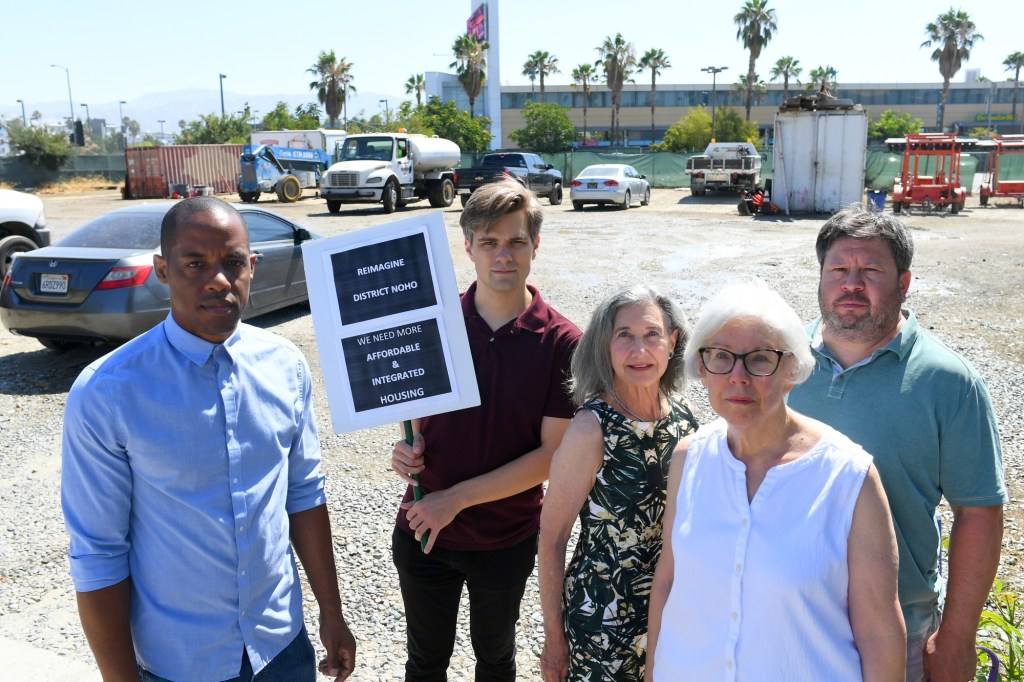 A $1 billion project planned for the North Hollywood rail/bus station that includes more than 1,500 apartments, new commercial centers and about $80 million in station improvements is nearing approval — but is facing opposition and possible revisions.

LA Metro, the county transit agency, is diving head first into the largest transit-centered housing project in its history, on 15.9 acres of its own land. Decades in the making, Metro and the city of Los Angeles have hammered out an agreement with a private developer to not only build the project, but also pay for Metro station amenities.

The NoHo District project is touted by Trammell Crow Company and its subsidiary High Street Residential, as well as Los Angeles City Councilman and Metro Board Member Paul Krekorian, as transformational for the East San Fernando Valley. They say that over 10 years, the project will create plenty of market-based and income-restricted housing; 105,125 sq. feet of retail and restaurant uses; and 580,374 sq. feet of office space.

But the project, and the agreement, are being challenged by a persistent group of housing advocates in the East San Fernando Valley who say it should offer more dedicated affordable housing.

An ongoing review by LA Metro staff could prompt a showdown at the transit agency over this sensitive issue.

“Our housing crisis is a humanitarian catastrophe and this is not the time to make excuses in order to build less (affordable) housing than was originally promised,” wrote Truman Capps, a member of the NoHo Home Alliance and resident of Studio City, in an email.

After years of back and forth, the push for a higher percentage of affordable housing has prompted a re-examination of the project in the last few months, with the focus on the projected number of income-restricted units.

In a county with severe housing shortages and rapidly rising rents adding to the number of unhoused, the project raises the question: Does LA Metro’s new transit lines and stations result in enough nearby affordable housing, or are these projects a gentrification force, displacing low-income residents with luxury apartments and high-end housing?

A report on the project is expected to reach the LA Metro Board of Directors in a month or so, said Wells Lawson, LA Metro deputy executive officer for joint developments. Though there’s no date certain, it’s possible it could be discussed at its next meeting on Aug. 25.

“We will report back on the issue of increasing the number of affordable housing units,” Lawson said in an interview on July 22.

Recently, LA Metro has recognized the gentrification occurring around its rail and bus rapid transit stations. As soon as transit comes in, developers pounce on vacant land and build high-rent apartments or high-priced condos, accommodating a wealthier class who desire to live near convenient transit. Along many Metro light-rail lines, developers have torn down apartment buildings for new ones, displacing low-and-moderate income tenants.

The board voted to pursue land-banking as a tool to prevent gentrification near future transit projects. By buying up land early in its planning process, the mega transit agency can “bank” the property, then sell it to affordable housing developers — but with requirements that guarantee low-rents and prohibit speculation.

NoHo Home Alliance members point out that LA Metro proposes to build 10,000 housing units in 10 years, of which 50% would be lower-priced affordable units. In January 2021, Metro reported only 37% of its projects, including those in the pipeline, were affordable units.

“Clearly, District NoHo with its 80-20 mix of market rate and affordable housing will only worsen the situation,” the Alliance wrote in a letter responding to the Environmental Impact Report.

The NoHo group says the project would be in violation of the city of L.A.’s own housing element, which states the city should prioritize affordable housing near transit and jobs.

The city’s housing plan calls for L.A. to “promote a more equitable distribution of housing opportunities throughout the city, with a focus on increasing affordable housing in higher opportunity areas and in ways that further citywide housing priorities.”

The group uses the city’s planning documents as an argument to raise the number of affordable housing in the District NoHo project. And since this land is owned by LA Metro, it is all public land, an incentive to do more public housing, the group insists.

“These objectives, policies and programs make clear that the provisions of the Housing Element are not words on a document to be filed and forgotten,” the group’s letter concluded.

Instead of worrying about percentages, Councilman Krekorian says the project will add both market-rate and income-restricted housing in San Fernando Valley.

Krekorian said the percentage “is not the point. The number of affordable units has been increased.”

“The (approximately) 300 affordable units at District NoHo increases the amount of affordable housing in Metro’s portfolio by nearly 50% and will be one of the largest affordable development projects in the city of Los Angeles,” Cox wrote in an emailed response on Friday, July 29.

After years of negotiating, Krekorian said the project balances the needs, from housing and commercial, to an expanded station that serves both connections to the G Line (Orange Line) and the B Line (Red Line). It also makes room for a connection to the future Pasadena-to-North Hollywood bus rapid transit line.

The $80 million from the developer will pay for a new set of escalators to the subway; additional bus bays including electric charging ports; a bike hub; a 1.2-acre park; a performance space; and completion of a bicycle track that connects from Burbank to Chatsworth, Lawson explained.

No other developer has come forward to build affordable homes around the third-busiest Metro transit station, Krekorian said.

“We want to make sure this developer continues to move forward with a project that will be a great benefit to the community,” Krekorian said.

Some of the project critics say Metro won’t budge on the development agreement because it is getting funding from the developer that it would otherwise have to get from state or federal sources. Both are difficult to come by.

“Metro has a laser focus on their piece of the puzzle: To improve the train station,” said Desmond Faison, a NoHo Home Alliance member who lives a little more than two miles from the station.

The group has suggested Metro tap state and federal infrastructure grants for the station amenities, and that could free up the developer to build more affordable units.

While that is being considered, Lawson said, there is no commitment, said critics. Lawson said of the deal with the developer: “Resources are scarce. We think we’ve been creative to meet a lot of goals.”

About 60% of the riders on the two lines from the station earn less than $25,000 a year. And if Metro wanted to build houses to help its riders, it would make the project 50% or more affordable housing, Faison said.

“A big part of the problem is that the riders of the train absolutely cannot afford to live (in 80% of the units),” he said. “On its face it is false and misleading.”

The NoHo group has handed out food and supplies at homeless encampments near the station, particularly along Lankershim Boulevard in the East Valley, and witnessed a tremendous need for affordable housing.

“There are people who used to live in this area but are now on the streets,” Capps said. “There are a lot of unhoused people in the southeast San Fernando Valley who need a place to sleep.”

Members of the group said they will not oppose the project, even if the affordable housing percentage remains at 20%. But they will keep pushing for more.

“We are not trying to stop the project. Our concern is when a city sets housing guidelines they should live up to it. While 300 something is good, more is better,” said Barbara Motz, a NoHo Home Alliance member and Valley Village resident.

“We think L.A. city and LA Metro can do better,” she added.