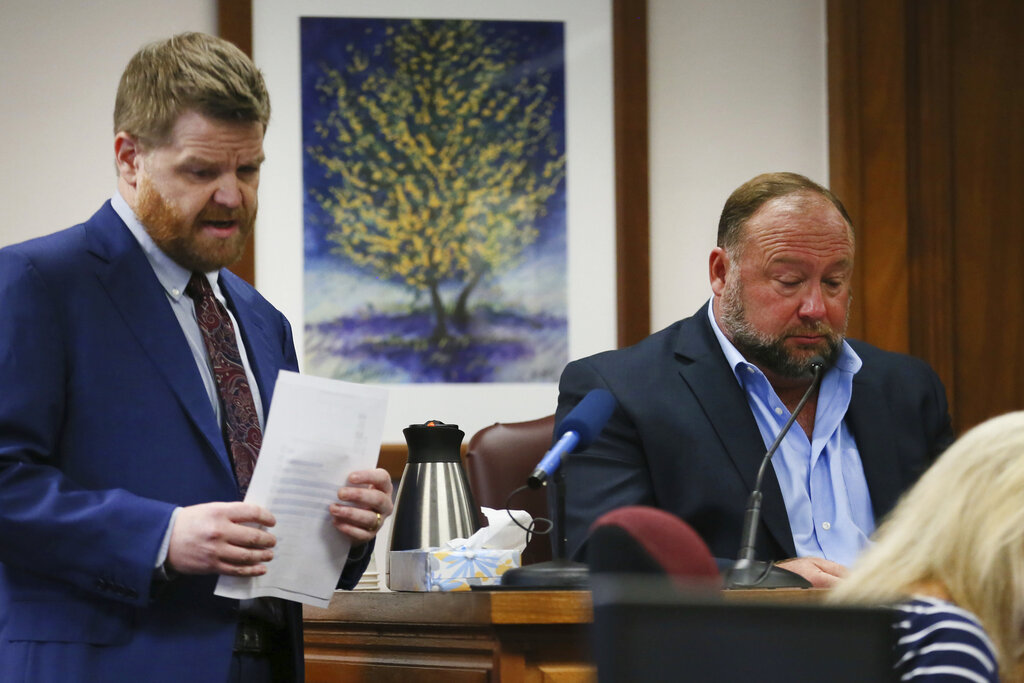 Closing arguments are scheduled to begin on Wednesday afternoon in the trial in Texas in which a jury is to determine the amount of damages that the Infowars host owes to parents of children killed in the Sandy Hook school shooting massacre.

Jones has said that he now believes that the 2012 horrific shootings, in which 26 people were killed, including 20 children, was “100% real.” The parents, Neil Heslin and Scarlett Lewis, previously won a defamation judgment against him for his earlier claims that the tragedy was a hoax.

Since he first took the stand on Tuesday, Jones has been repeatedly admonished by the Travis County judge in the proceedings, Maya Guerra Gamble, and he faced a rigorous cross examination from Mark Bankston, who is representing Heslin and Lewis. Their six-year-old son Jesse was among the victims in the massacre.

Bankston showed an image from an Infowars segment in which flames appear over the judge’s face. In the five-second segment itself, a narrator claims that Gamble comes from Child Protective Services, “which has been exposed for human trafficking and working with pedophiles.”

“You are telling the world, not to believe what has happened in this trial, because this judge is involved with CPS, who is working with child traffickers and pedophilia?” Bankston asked.

“No, that is not what I am saying,” Jones responded.

Then Bankston ran the clip, and then asked Jones, “That is what you mean when you say you are taking [the trial] seriously?”

“I take this as serious as cancer,” Jones said. “You showed somebody else’s clip. They are always a few seconds long. Why don’t you play the whole thing.”

“Well I didn’t direct or produce it,” Jones said.

“You certainly published it.”

“I am not standing behind it. i have to see the whole thing,” Jones said.

But Bankston later asked Jones, “Is there anything before and after that that would make it great to show pictures of our judge on fire and telling the world that she is involved in pedophile? Can you tell me the context that would occur before or after?”

Jones said, “If you are only willing to go off five seconds, the judge is the fire burning lady liberty. It’s not of the judge. The judge is consuming freedom.”

Bankston then said, “I sure hope that some of your viewers are able to make that distinction” from the clip.

“I’m saying that that can potentially be a danger if they don’t know what is going on,” Jones said.

Bankston then played another clip of Jones from his show last week, in which he groused about the recently selected jury in the trial. In the segment, Jones said, “there are experts in leftist jurisdictions, who are experts in sending out jury summons and hitting, let’s just say this, extremely blue collar folks. Half that jury panel does not know who I am. They said that.” He said that when jurors were asked if they ever got anything wrong about him, “they said no.”

In the courtroom, Bankston asked, “Mr. Jones, you don’t like that this jury is made up of blue collar folk, you think that’s wrong?”

Bankston then referred to Jones’ comment about people who “don’t know what planet they are on.”

Jones replied, “We all live in bubbles, and the people who live in a mainstream media bubble, they might have not have even seen or said what I have done.”

The parents are asking for damages of $150 million for defamation and infliction of emotional distress. They said that after Jones claimed Sandy Hook was a hoax, they faced death threats and harassment.

Bankston also revealed that Jones’s legal team “messed up” and accidentally sent him the entire digital file of his cell phone, including “every text message you sent for the past two years.” He said that Jones lawyers did not take steps to try to portect the contents as privileged, giving him the ability to introduce the messages in court.

Bankston said the text messages “fell free and clear into my possession, and that is how I know you lied to me when you said you didn’t have text messages about Sandy Hook.”

“See, I told you the truth, this is your Perry Mason moment, I gave the phone…”

The Asahi Shimbun Newspaper Signs With Storied Media Group With Goal To Mine IP for Film & TV
Wheeler Walker Jr. Shoots His Shot With Kim Kardashian After Pete Davidson Breakup
Public has a ‘right to know’: Speaker refuses to reveal why MPs wanted parliament attendance data deleted
How To Find and Develop a Local Anti-Censorship Group: Book Censorship News, August 12, 2022
Options for cost of living help will be ‘ready’ for new PM, says chancellor