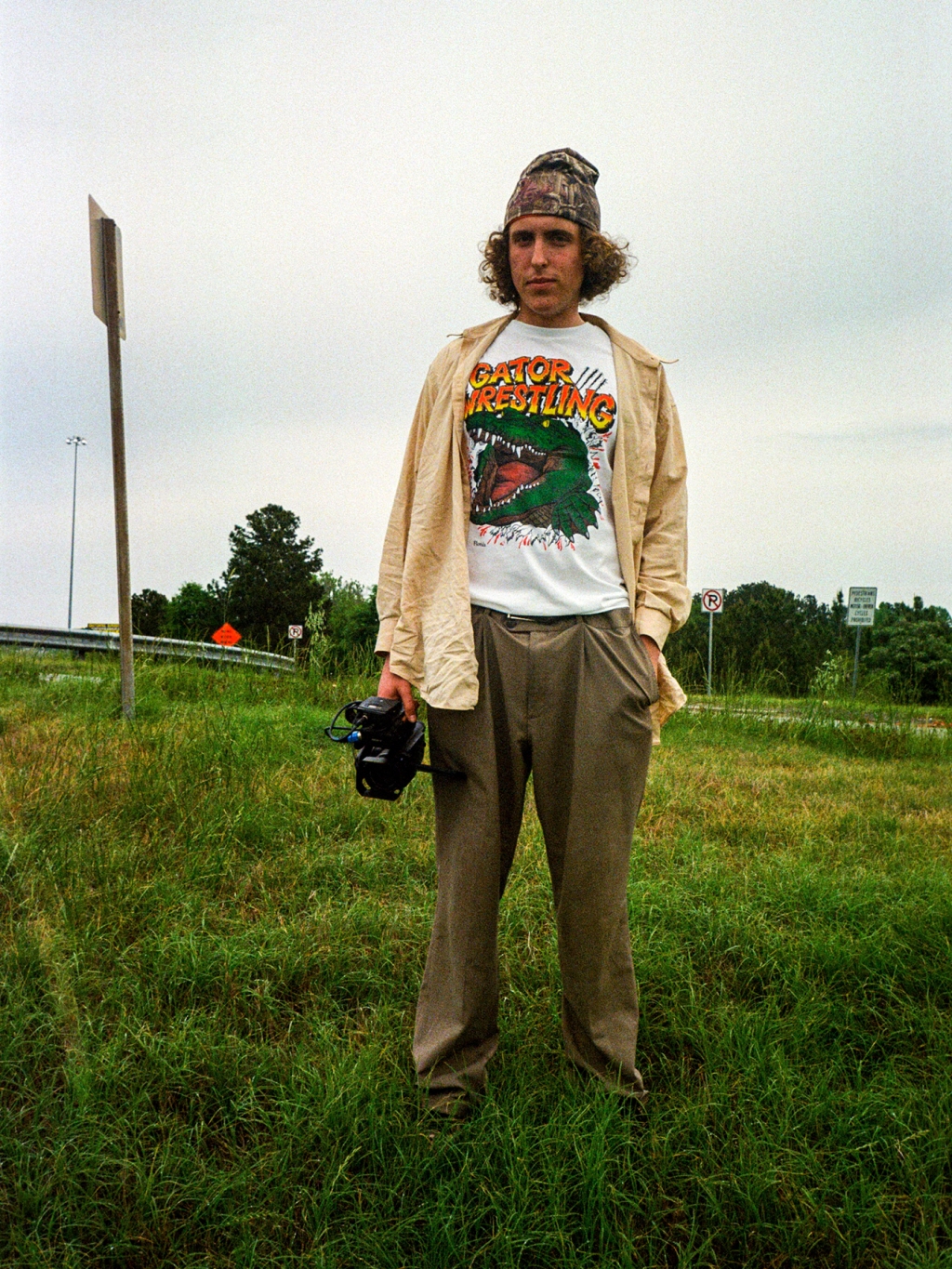 It’s 11 o’clock in the morning on a sweltering Sunday in New York’s East Village, and Andrew Callaghan, sporting a smirk and shock of curly blond hair, is, uncharacteristically, moving a little slow. A few blocks down from his aunt’s apartment, where he crashed the night before, Callaghan, 25, nurses a hangover. He’s been on the road for two months, stopping off for the weekend to party in New York, and he’s only got a few hours before he shuffles upstate to rest, then off to Toronto, before heading back to his home-base, Los Angeles, for a few months of rest before a U.S. tour this November.

As the host of Channel 5, Youtube’s leading street-journalism team, Callaghan is one of the hardest working, and possibly the best known, journalists of his generation —  at least on the web. Callaghan’s life, and the lives of his co-producers on Channel 5 — Nic Mosher and Evan Gilbert-Katz, also both 25 — is turbulent. Since premiering in April 2021, the team have become known for traveling around the country in an RV, chasing breaking news and documenting gonzo subcultures, all on their own high-paced schedule. “I’ve been filming a fuck ton,” Callaghan says, noting trips to the Catalina Wine Mixer and Sneaker Con in California, as well as a fruitful trip to Chicago: “I went to the Lyrical Lemonade festival, did some shit on O Block. I went to a White Sox Game.” At each, Callaghan filmed enough to release a 15- to 20-minute mini-doc — but even he can’t keep up sometimes. “It’s hard to measure months because I move around so much,” he says. 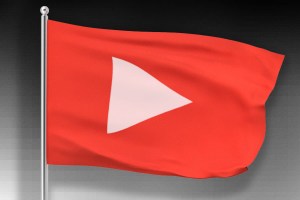 Making videos at events like those is Channel 5’s whole schtick — and it’s a format Callaghan has been honing since 2018. Beginning with Quarter Confessions, a YouTube series that Callaghan launched while studying journalism at Loyola University in New Orleans, he mastered his now-ubiquitous man-on-the-street mini-interview. Tall, suited, gawky, and quick to flash a wry smile, Callaghan made a brand out of letting weirdos, partygoers, and assholes say whatever they want on camera.

Callaghan grew up in Philadelphia before his parents decamped to Seattle, where his high school journalism teacher let him leave class to cover events like a juggalo gathering and Occupy Seattle for the school newspaper. After graduating in 2019, Callaghan launched All Gas No Brakes, a venture sponsored by internet-content conglomerate Doing Things Media, which gave Callaghan an RV to travel the country and make videos. And as his beat grew outside of Bourbon Street, so did his ambition.

With funding in hand, Callaghan recruited friends Mosher and Gilbert-Katz to aid in filming, editing, and planning. Together, the three piled in the RV, drew on extensive lists of oddball events —  a Flat Earth Conference, the parking lot outside of a Phish show, an anti-vaxx rally in Hollywood — and developed an uncanny ability to source compelling interviews. “The kind of urgency of the stuff that he covers is what I appreciate,” says John Wilson of How to With John Wilson, one of Callaghan’s litany of celebrity fans. “When he was interviewing someone outside of a burning building during a George Floyd protest — I’ve never seen anyone do that, and that’s what kind of sold me. That’s what made me realize he was really dedicated to getting something that nobody else was.”

For a year, Callaghan, Mosher, and Gilbert-Katz traveled the country, posting biweekly videos. Then last spring, they decided to make a change. When they signed the deal with Doing Things, they were brought on to do “party content.” But after the pandemic set in, and George Floyd protests erupted across the country, they were ready to tackle bigger, more difficult issues. According to Callaghan, he was no longer pleased with the deal.

“I still like party content” Callaghan says. “It’s tight. But it’s not tight when it’s like the middle of a summer of protests and some fucking dude in suburban Atlanta is like: ‘The Portland video is dope, man, but can we like shift back towards party content?’ It’s like, What fucking party do you want me to go to?’”

Reached for comment, a Doing Things Media spokesperson accentuated their comedy brand over journalistic allusions. “When the All Gas No Brakes team asked about covering the protests, it felt like too serious of a political topic for us to cover since we historically had only made comedic interviews. When Andrew said it would be a serious episode, we allowed it since we knew how important it was to him.”

Thus, after a “sick-ass” agent got them out of their contract in March 2021, Channel 5 was born, and with it, videos that doubled-down on their unique brand of silly and serious. Lighter fare includes an interview with Tom Hanks’ son Chet, who went viral for spitting white-boy patois on the Emmys red carpet. Weightier segments include the hourlong video diary following the People’s Convoy, a group of disgruntled conservative truckers. And Channel 5 traveled to Houston for the 2022 NRA Conference, before smash-cutting to the team on the ground in a hollowed-out Uvalde, devastated by a mass shooting just weeks earlier.

As of now, Callaghan and his team have amassed 1.96 million subscribers on YouTube. Each video has surpassed 1.5 million hits, and the comments are flooded with well-wishes. On Patreon, thousands of supporters pay up to $10 dollars a month for bonus content, and the chance to see new videos days before their YouTube premieres.

Having wrested creative control from Doing Things Media, Channel 5 is now free to pursue newsworthy subjects. With a laugh, Gilbert-Katz refers to the videos All Gas No Breaks made two years ago as “dumber” than the content they make now. “I think some of the best shit we’ve ever made was, like, the Minneapolis protest video, or the Portland protest,” he says. “Whenever you make anything, you have to change it up before people actually want you to change it up, and that’s how you remain relevant.”

For Channel 5, that meant ditching the zippy editing style that got Quarter Confessions and All Gas No Breaks so much attention in the first place: the rhythm, the crash-zooms, and a shot Gilbert-Katz claims to have “low-key invented”: a two-camera setup with one focused exclusively on the interviewees mouth.

Since then, Channel 5 has made a conscious effort to change its editing style. The shots are longer, the awkward pauses more genuine, and the crew has all but ditched the “chaos compilation” style of its louder, earlier output. But that doesn’t mean Channel 5 isn’t willing to get silly anymore. “We like [filming at events] that don’t seem serious, and see if we can sit for it long enough to notice the humanity,” says Mosher.

So far, trusting their audience to follow has meant big things for Channel 5. Earlier this month, the team sold its first feature to HBO. Co-produced by A24, the Callaghan-directed film explores the 2020 election and the lead-up to the Jan. 6 riots. In conversation with Rolling Stone, Callaghan teases a deep immersion into the “MAGA, Proud Boys, InfoWars-world” — though he says the title hasn’t been decided on yet. As for whether Channel 5 was on the ground in D.C. that day, “that’s the part the audience has to wait to find out,” says Callaghan.

Additionally, Channel 5 will premiere the first 30 minutes of a second finished documentary, Kelly J. Patriot, at dates on a nationwide tour this fall.

Gilbert-Katz describes Kelly J. Patriot, self-produced by Channel 5, as a leap forward. “It’s really political, and it’s super intimate,” he says. “It required a lot of access and a level of critical thinking that a lot of the shit that we make for YouTube doesn’t necessarily. We’ve always tried to strike a balance between some shit that we just think is funny … and stuff that actually matters to us.”

Before heading out, Callaghan addresses that dichotomy directly, more potent now than ever, as the group set its sights on bigger venues than Youtube. “It’s like I have two brains,” says Callaghan. “One of them is like, ‘Everything’s dumb as shit,’ and one’s like, ‘Everything’s sad as shit.’ There’s always a fear that when I cross over into a serious topic people are going to say, ‘Stick to your funny shit.’ But that doesn’t seem to be anyone’s response.”