MPs have paid tribute to the Queen in the House of Commons, with Boris Johnson making his first appearance since stepping down as prime minister, asking the public to “think what we asked of her and think what she gave”.

His successor, Liz Truss, the Labour leader Sir Keir Starmer and the Speaker, Sir Lindsay Hoyle, led MPs and peers in paying tribute to and sharing memories of the Queen, who died on Thursday, aged 96.

Mr Johnson said “millions of us are trying to understand why we are facing this deep, personal and almost familial sense of loss”, but it was because she was “the keystone in a vast arch of the British state”.

He said when they last met, when he tendered his resignation as prime minister on Tuesday, the Queen was “as radiant and as knowledgeable and as fascinated by politics as ever”, and “as wise in her advice as anyone I know, if not wiser”.

And he cited to her humour, saying that it, alongside her “work ethic and that sense of history… together made her Elizabeth the Great”.

Read more on the Queen:
The Queen and her 15 prime ministers
The Queen’s death – what happens next?

Mr Johnson concluded: “The fact that today we can say with such confidence, God save the King is a tribute to him, but above all, to Elizabeth the Great who worked so hard for the good of her country, not just now, but for generations to come.

“That is why we mourn her so deeply. And it is in the depths of our grief that we understand why we loved her so much.” 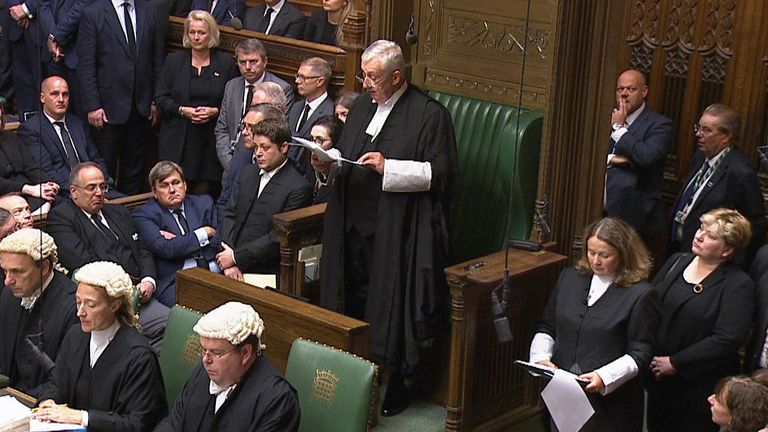 Silence in Commons and emotional Speaker

Another former prime minister, Theresa May, said the Queen was “the most remarkable person I have ever met”, adding: “She was respected and loved, not just here in the United Kingdom and in other realms and the Commonwealth, but across the world.

“And that love, respect and admiration was borne not out of her position, but because of the person she was – a woman of dignity and grace, of compassion, and warmth, of mischief and joy, of wisdom and experience, and of a deep understanding of her people.”

‘One of the greatest leaders the world has ever known’

Proceedings started in a packed Commons with a minute’s silence, as MPs, all in sombre clothes, bowed their heads.

The event was also littered with laughter and fond memories of the Queen who ruled for more than 70 years.

The Speaker was the first to pay tribute, and said that she had seen 57 sessions of Parliament, 18 general elections and 10 different Speakers during her reign.

He said: “While this is a time of very considerable sadness, those memories of a noble, gracious lady who devoted her life to a family, the United Kingdom and those nations around the world whom she served as Queen will bring us some consolation and joy.”

Tonight at 8pm on Sky News: Watch the documentary Elizabeth II: A life of duty with Mark Austin, a look back at the extraordinary life of Britain’s longest reigning monarch

Sir Lindsay was followed by the new prime minister, Ms Truss, who said that the Queen was “one of the greatest leaders the world has ever known”, adding: “As we meet today, we remember the pledge she made on her 21st birthday to dedicate her life to service. The whole House will agree, never has a promise been so completely fulfilled.”

She said when they met just three days ago, when the Queen asked her to form a new government she “generously shared with me her deep experience of government, even in those last days”.

“Everyone who met her will remember the moment, they will speak of it for the rest of their lives. Even those who never met her.

“Her late majesty’s image is an icon for what Britain stands for as a nation. On our coins, on our stamps, and in portraits around the world, her legacy will endure through the countless people she met, the global history she witnessed and the lives that she touched.”

And she pledged her allegiance to King Charles, who she is due to meet this afternoon, saying: “He has already made a profound contribution through his work on conservation, education and his tireless diplomacy. We owe him our loyalty and devotion.”

Sir Keir echoed support for the King, and said that the country shared in the loss of the Royal Family due to the relationship the Queen forged with her subjects. 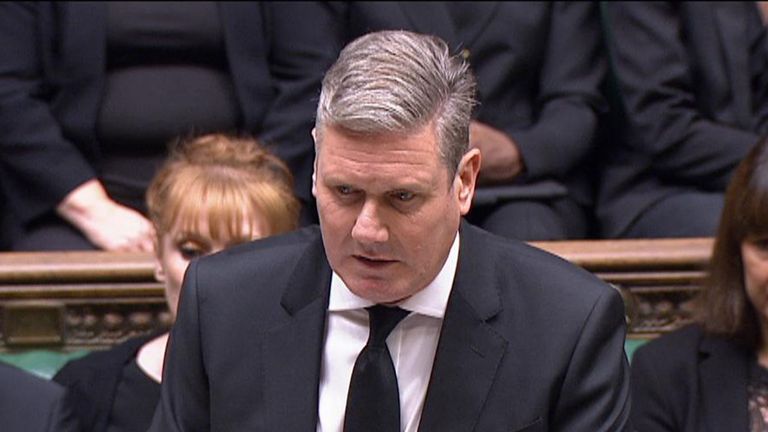 Starmer: ‘Queen lived alongside us’

He continued: “The loss of our Queen robs this country of its still point, its greatest comfort at precisely the time we need those things most.

“But our Queen’s commitment to us, a life of public service, was underpinned by one crucial understanding that the country she came to symbolise is bigger than any one individual or any one institution.

“It is the sum total of all our history and all our endeavours, and it will endure. The late Queen would have wanted us to redouble our efforts to turn our collar up and face the storm to carry on. Most of all, she would want us to remember that it is in these moments that we must pull together.”

The SNP’s Westminster leader, Ian Blackford, said: “For Scotland, she was Elizabeth, Queen of Scots.”

He added: “It is clear that Balmoral has been a place of peace and sanctuary for her throughout her whole life, and perhaps particularly so, following the death of her husband, life companion and love, His Royal Highness, Prince Philip, Duke of Edinburgh.

“It is therefore perhaps fitting that she has met her final peace at Balmoral, a place where she found such enjoyment and comfort. And as someone of demonstrably strong faith, she will now have enduring peace with herself and of course to be reunited with Prince Philip.”

Read more on the King:
Britain’s new King – the events that shaped Charles III
Will King Charles bring a different type of reign?

The Commons sitting is taking place at the same time as peers pay tribute in the House of Lords, with both expected to last until 10pm tonight.

MPs and peers will return to Parliament on Saturday to continue their tributes.

The PM is also expected to attend a memorial service for the Queen at St Paul’s Cathedral this evening and will give a reading.