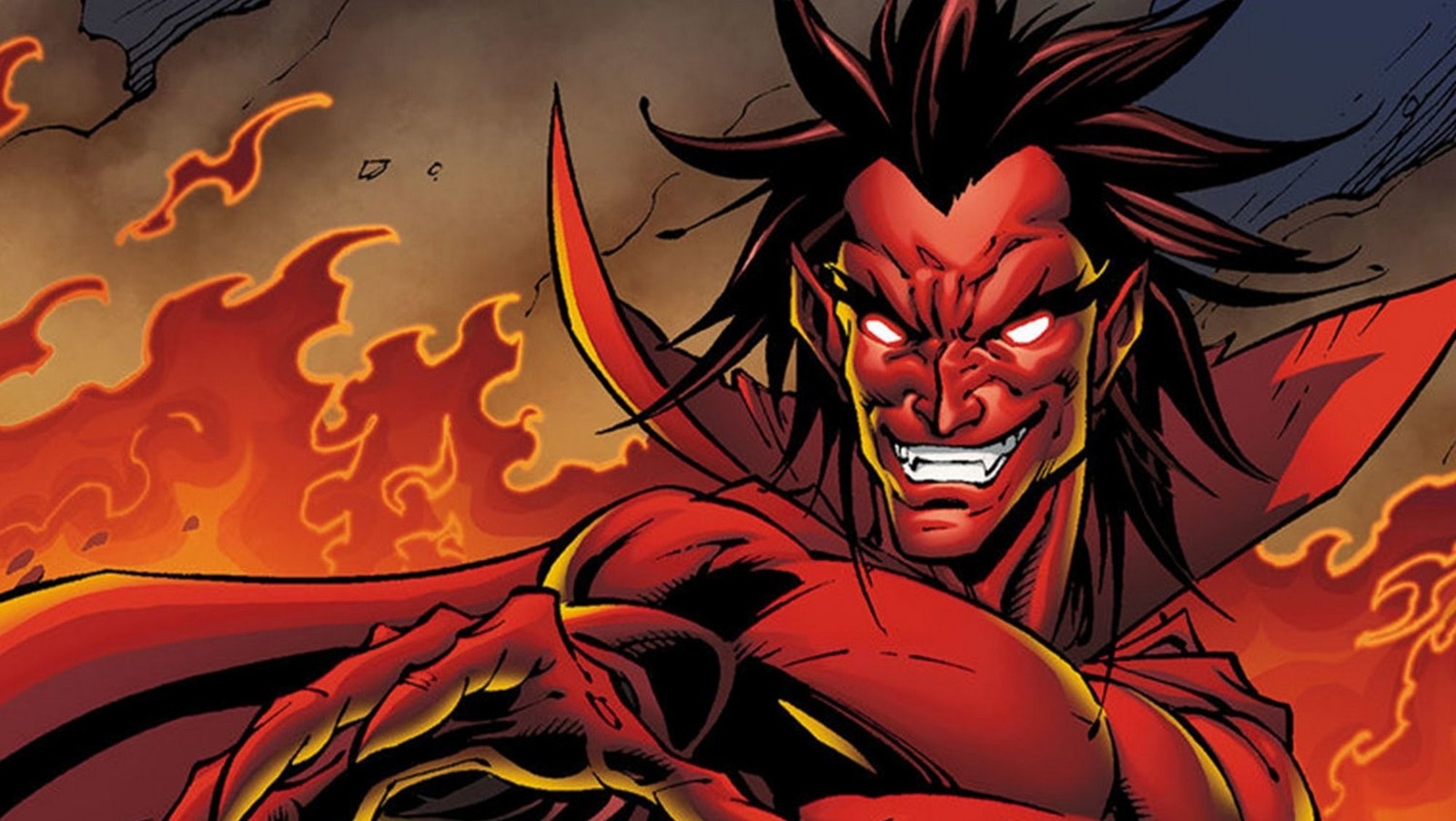 This article contains some MCU spoilers

The Marvel Studios Disney+ shows have led to more discourse than the movies perhaps ever did. With so many more easter eggs to break down, characters to unravel and settings to explore, it’s no surprise that fans have a diverse range of opinions on what’s happened and what’s coming next. But there’s one figure who seems to have connected almost all of the streaming service’s projects in one way or another; whether as a serious discussion or as a parody playing on a long-running obsession, and that’s Mephisto, a character who’s comic book roots are baked into the fabric of the Marvel Universe, and who has surprisingly never actually been introduced into the MCU itself.

Who the Devil Is Mephisto?

Mephisto is a demonic entity that was introduced in 1968 as part of Issue 3 of The Silver Surfer run. The figure was created by Stan Lee and John Buscema and was largely based on the lore of Mephistopheles, a creature that in turn found its origins within Faustian legend. While some may view Mephisto in the Marvel Universe as a variation on Satan, this Hellish character is one of many beings associated with the devil that still traces his home back to the underworld.

Throughout Marvel history Mephisto has found himself filling many roles, becoming a major antagonist to Ghost Rider in particular, while crossing over with characters that are heavily linked to the supernatural. He’s faced off against the likes of Hellstrom, Doctor Strange, Magik, the Midnight Sons and, just like most other Marvel villains, Spider-Man. But his role on the page extends far past being a demonic threat for the vigilantes of Earth-616 to face.

Mephisto represents something much larger, with characters usually turning to the demon in their most desperate days to make a deal with the devil. Manipulative and forever scheming, Mephisto feels almost like a deity in the way he is presented, never truly being defeated and usually lurking in the shadows for a hero to make their next mistake. With his immense power, Mephisto has forged reality in his image, warped the minds of incredible sorcerers like Scarlet Witch, and pitted the Earth’s mightiest against one another. He’s a big deal! A heavy hitter and Avengers-level enemy. No wonder fans want to see him in the cinematic equivalent.

Fans initially speculated on whether Mephisto could be the villain of WandaVision, and that’s arguably where the origin of the obsession surrounding the character began. In the comics, the Scarlet Witch’s reality is heavily influenced by the abilities of the demon, with Mephisto attempting to take control of her. Famously, he’s responsible for the creation of her two children, Tommy and Billy; a troubling idea that would go on to haunt the family.

It made complete sense that Marvel would be copying the narrative from the page when adapting it to the small screen and it was therefore a natural assumption that Mephisto would play a part in WandaVision. Each week there were further clues that the demon would be revealed, from absurd imagery to comic book symmetry. That all turned out to be false with the reveal that it was Agatha all along. But even with the Harkness revelation and the return of the Darkhold to screen, there was still a sense that someone else was pulling the strings. Agatha’s shadowy secret lair, full of beetles, spell books and effigies, held plenty of clues to Mephisto’s debut; an introduction that never came to be.

Although the calls for Mephisto’s introduction in WandaVision might have been logical or valid, the speculation surprisingly didn’t end there. Loki was the second outing for Marvel Studios on Disney+, and imagery featuring the devil and Hell was quickly brought into the equation. Again, this was a red herring, the symbolism linked to the duality of Loki himself, as opposed to any other being from the afterlife.

Then things got sillier. The calls for Mephisto became somewhat of a parody. Sharon Carter’s evil turn in The Falcon and the Winter Soldier was met with jokes that she may have done a deal with the devil herself. The cosmically confusing background of Ms. Marvel’s foes briefly led to Mephisto claims and of course there was the whole debacle involving the What If…? Multiversal easter egg. With Scarlet Witch’s arrival in Doctor Strange in the Multiverse of Madness and the demonic story that unravelled there, it was almost expected that Mephisto madness would be unleashed, despite the fact that it was clearly Chthon that was being drawn from. Time and time again, whether it’s a joke or a serious contender, projects have been framed with the potential of an appearance from the beastly figure.

So why are Marvel fans so obsessed with Mephisto? Well there are two ways of looking at it. Firstly, Mephisto is a pretty intriguing character. The morality of Marvel’s heroes isn’t always explored in great detail. Occasionally an Avenger might have to do battle with their inner voice over what’s right or wrong. Civil War is the perfect example, and those kinds of significant conflicts make for genuinely interesting watches. Mephisto is such a brilliant catalyst for taking heroes on a darker path. His lust for manipulation makes him a very different kind of threat, and his power level would make him a significant figure for any hero to face. While Marvel isn’t low on villains to draw from, Mephisto provides a unique storytelling opportunity.

Secondly, while Mephisto himself might be an excellent creation to utilize, what he signifies opens the door to a whole new world of narratives. With Mephisto comes further supernatural storylines, worlds and characters. If this demon was to exist in the MCU, then Ghost Rider would surely be a future project. Not to mention, the introduction of Hell as a real location then prompts further tales revolving around Daimon Hellstrom, the Midnight Sons and even other demonic and devilish entities. Mephisto is a major launch pad for a different side of the Marvel Universe. One that’s darker, spookier, horror fuelled and full of epic adventures involving the beast as a leading foe.

Recent rumors have suggested that fans might finally be getting what they’ve hoped for – a genuine Mephisto appearance on screen. It’s being reported that comedy and character actor Sacha Baron Cohen will be stepping into the role of Mephisto in Disney+’s Ironheart. Known for creating figures like Borat and Ali G, alongside crafting stunning performances in productions such as The Trial of the Chicago 7, Cohen has demonstrated he has the charisma, acting ability and love for erratic characters to pull off the role to perfection.

What’s intriguing about that rumor is the idea that Ironheart will be the point of origin for Mephisto in the MCU. The character is of course technology based, playing on the legacy of Tony Stark. But the Disney+ series has already confirmed that The Hood will be the primary antagonist, with Anthony Ramos in the role starring alongside Dominique Thorne’s Riri Williams. What could Mephisto possibly contribute to this story and why is Ironheart being chosen for his debut?

It’s unlikely that Riri Williams herself will be looking for any kind of deal to strike, considering she is far too capable and competent on her own. However, Parker Robbins has been painted as a desperate character in the comics. It’s far more plausible that it’s The Hood who will be making a deal with Mephisto, considering he is a character that relies on the supernatural to boost his power in the criminal underworld. There is therefore a natural story in place for Mephisto to slot into.

What Mephisto Could Bring to the MCU

Marvel has already lined up their Thanos-level big bad for the Avengers to face. Kang is very much fitting into those Multiversal plans perfectly. But the supernatural side of Marvel is starting to heat up. Doctor Strange, Moon Knight, Scarlet Witch, Werewolf by Night, Man-Thing and Elsa Bloodstone are all characters who are tapping into the horror genre and pulling from narratives from the dark side of the comics.

If the MCU wanted to tie those stories together, leading these vigilantes in a particular direction that might bring in Black Knight, Blade and Ghost Rider as they go, Mephisto is surely the perfect catalyst to do so. He has an established history with the characters, an easy backstory to set out, provides a brilliant storyline for any hero to explore their darker side and has an obsessed fan base to cater to.

Marvel clearly isn’t going to shy away from the Mephisto obsession. Perhaps it’s been valid for some projects and a little hilarious in its parody of others. But now that Mephisto is genuinely on the table, it’s obvious that there’s actually quite a bit he can contribute to the MCU.