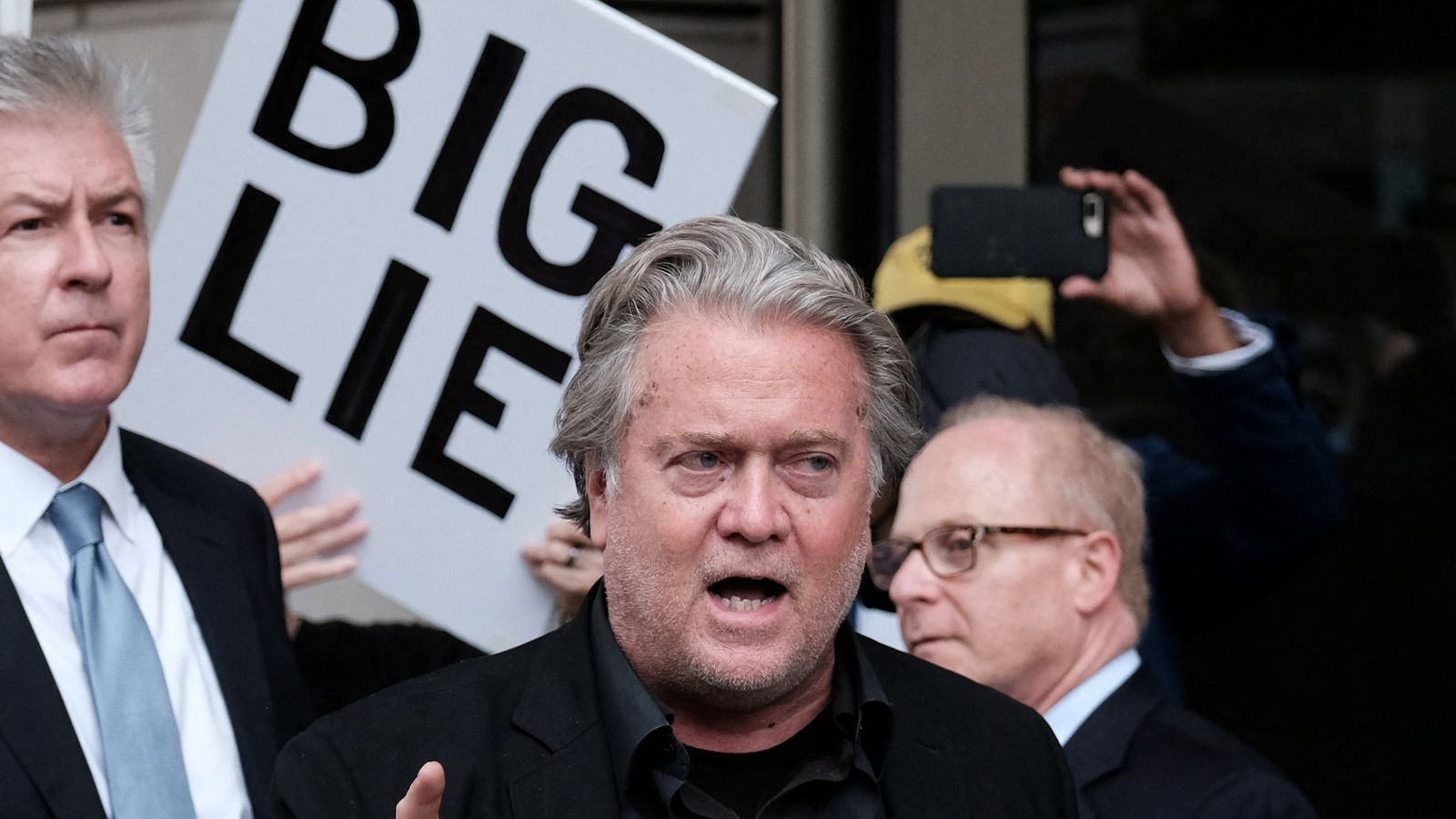 Steve Bannon, the former White House adviser to Donald Trump, has been sentenced to four months in prison.

He had been convicted of defying a subpoena to appear before a congressional committee investigating the 6 January 2021 assault on the US Capitol.

His prison sentence has been delayed pending an appeal – meaning he won’t walk into jail straight away.

The committee had sought testimony from Bannon, believing that he was aware of Donald Trump’s intention to falsely declare victory on election night in 2020, and that he had advance knowledge of the plans for the insurrection.

In its last public hearing, the committee played video of Bannon on his livestreamed show from the day before 6 January, stating: “All hell is going to break loose tomorrow.”

On his way into court, the right-wing former Trump strategist was heckled by a waiting crowd, who shouted “fascist” and “traitor”.

Mr Bannon told waiting reporters: “Remember this illegitimate regime. Their judgement day is on 8 November (US midterm elections) when the Biden administration ends.”

Prosecutors had called for a jail sentence of six months and a maximum $200,000 (£178,000) fine for refusing to provide either testimony or documents to the congressional committee.

Bannon’s defence team had argued that he be given probation and that any sentence be suspended pending an appeal.

They had argued that, in pursuing his co-operation, their actions were illegitimate and politically motivated.

The January 6th committee has also announced it will subpoena Donald Trump himself.

It has described the former president as being central to the Capitol insurrection, and believes that evidence and documents from Trump himself would reinforce a link.

Trump hasn’t said whether he will comply with the subpoena but has dismissed the committee as a “witch hunt of the highest level”.

Should he resist the subpoena, it’s doubtful that he would face the same fate as Bannon.

There is no Supreme Court precedent giving Congress powers to force a former president to give evidence about his time in office.

There is also an issue around timing. The US midterm elections take place on 8 November. If the Republicans win control of the House of Representatives, they have said they will wind up the House January 6th committee.

In these circumstances, the subpoena would lapse.

Coyote attacks toddler in front of her Woodland Hills home
“Magic Doesn’t Pay the Bills”: Walt Disney World Workers March Near Park, Demand “A Fair Wage”
Los Angeles Again Nearing Covid Thresholds For Universal Indoor Mask Mandate In Public Spaces
‘May the Force be with you’: PM ‘sad’ as Javid to step down at next general election
Oil cartel sticks to targets despite uncertainty over new sanctions on Russia