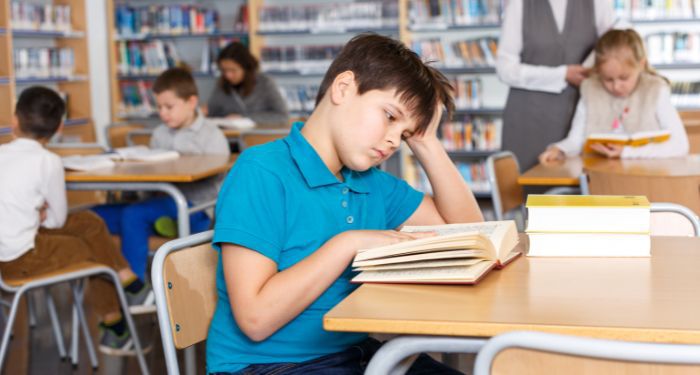 In education there’s a distinct jargon used. Acronyms and idioms and particular turns of phrase. This isn’t unique to education, but ubiquitous in most occupations. While we do the best we can to reflect on our teaching processes and make corrections where necessary, sometimes we don’t even think about a term that needs to be examined because we’ve been using it for so long. This is not an excuse; it’s an explanation.

“Reluctant reader” is one of those terms. It’s still in use for a few reasons. One, it does describe people who are hesitant to read, and specifically, books or long passages. Two, it’s easy to remember and easily understood by non-educators. Parents, for example, understand what we mean when we call a child a reluctant reader. Whereas terms like 504 or scaffolding or IEP are not as accessible upon first hearing them. Finally, it’s alliterative. I don’t have to tell you that people who love literacy love alliteration.

It’s time for the expression to be closely examined and weighed. “Reluctant reader” does not have a positive connotation, for children or adults who identify with that term. In order to redefine reluctant readers, we first have to understand who they are.

What is a reluctant reader?

Reluctant readers fall into two main categories: unwilling and unable. It’s important to recognize the distinct differences between these two. While “reluctant” does accurately describe both of them, the motivation and reasons for each have crucial differences.

Unwilling readers are people who don’t want to read for a variety of reasons. They could be bored by reading or by the subject matter about which they are being asked to read. Almost nothing is more unpleasant for a person with a still-developing brain than to sit still and focus on a task that is uninteresting to them. It’s possible that they weren’t given a choice of what to read. Being forced to read something, even if it might interest the reader once they got into it, is something a lot of people fight against. Maybe the person is a slow reader, and as a result, often feels left behind in a group classroom setting. Then they start to identify as someone who’s not good at reading and develop negative self-talk or self-perception around it.

Unable readers are people who struggle with key reading skills and reading endurance. People who have learning disabilities such as dyslexia, ADHD, or oral/written language disorder may be reluctant to read because it is more difficult for them. If these people find themselves in a classroom setting where it seems like all their peers don’t struggle, they are more apt to shut down and be defeated before even giving themselves the time they need to learn the necessary skills. Or they might be people who fundamentally have the skills they need to read but don’t have reading endurance. They read along in class, they read quick or interesting short stories or articles, but they start to wane when they have to sit and read material they consider difficult for extended periods of time.

There are distinct disadvantages to labeling. They can shape teacher expectations before even meeting a student. It might make developmentally-normal troublesome behaviors seem exaggerated causing the teacher to confuse the student with the label. Sometimes the labels are unreliable or trendy (think TikTok diagnosing ADHD in adults). Children cannot receive accommodations in school until they are labeled. It isn’t always possible for some families to seek out a diagnosis for their child if they don’t have the resources for a child study, don’t speak English as their first language, or don’t recognize learning disabilities as valid for cultural or religious reasons.

Labels aren’t all bad, despite what your on-again-off-again boyfriend might have you believe. There are advantages to labeling. Practically, federal and local funding for special education programs are based on categories of disabilities. Labels make it easy for educators to communicate with each other about a child’s needs and necessary accommodations. They can give teachers a quick snapshot of the kind of support a student may need based on their disability. People need categories to be able to understand challenges students face and in order to organize their thoughts and strategies around different disabilities.

Labeling makes people more tolerant of difficult behaviors. A student with an ADHD diagnosis will be given more patience when they get out of their seat or move around the classroom than a student who is undiagnosed and considered a nuisance. Labeling has led to teaching strategies and methods specifically for disabilities, which often benefit the entire class. Finally, labeling allows the person being labeled to change their perception of themselves and name specific challenges they are having. So instead of thinking they are “bad” or “lazy,” they’ll understand that their brain works differently than most people’s and can develop resilience around overcoming challenges rather than accepting they are bad people.

Dr. John Spencer has written about flipping the term from “reluctant reader” to “reading reluctantly.” This shifts the focus from the person being the problem to the behavior being the problem. Spencer goes so far as to say that there is no such thing as a reluctant reader. We need to examine why a child hates reading and empower them to engage with the practice in a meaningful way.

When I was a classroom teacher, I started every block with 20-30 minutes of silent sustained reading. I taught in a school that was primarily Black students who received free and reduced lunch. Exactly the type of student who is labeled “lazy” and “bad” by society. Prime examples of what many people would consider reluctant readers. Without fail, every class, year after year, the students would read silently for 20-30 minutes. Some years it took time and conversations with students who claimed to hate reading. My philosophy was then, and still is now, that if you don’t think you’re a reader, then you just haven’t met the right book yet. Despite what Ye says to the contrary.

So what do we call them then?

Great question. I don’t have a definitive answer, but I do have some suggestions and believe that people should be able to name or label themselves where they feel they fit best. Dr. Spencer’s “reading reluctantly” is at the top of the list.

One that I think “reluctant reader” was trying to mask is a reader who struggles. I’ve found that people who struggle with learning know they struggle. It’s not a surprise to them. They are able to look around at their peers and see places they have more difficulty than others. So why not call them readers who struggle, rather than reluctant readers? We are not shocking them by labeling them as readers who struggle. They already know. Calling something what it is, shouldn’t have a negative connotation. We need to get away from the idea that difficulties signal inadequacy. Another similar alternative, could be “slow reader.” This doesn’t have to be a negative label or signal an inadequacy. Instead, it can be a statement of fact. I am a slow reader. I don’t read as fast as what is considered normal or average. It’s a skill that can be measured.

Ideally, they could be called “careful readers” or “people who read carefully.”  These are people who take their time because they know they are prone to making mistakes. They are readers who stop occasionally to make connections or take notes. These readers don’t pick up books that are boring to them. They are careful in their selection in addition to their style of reading. Before starting, they choose a book carefully because they know they’ll be spending a lot of time with it, probably more than their peers. Once they start it, they take care with each page, each paragraph, and each sentence. These readers have to take more care in approaching a task that is challenging for them.

It’s time we reexamine the term “reluctant reader” because it is more problematic than it is helpful to those who bear that label. Instead, let’s give readers the opportunity to approach reading gently, carefully. Let’s provide these readers with the care that they need in order to thrive, fall in love with the right book for them, and read at their own pace.