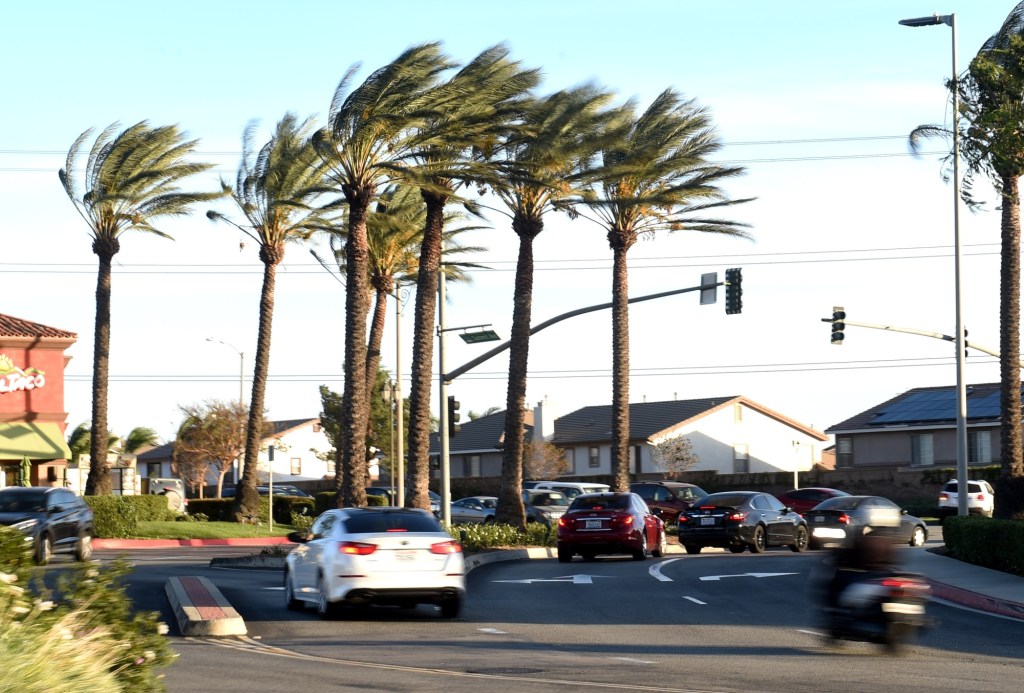 Don’t let clouds and recent rains lull you into complacency. #SantaAna winds are on the way; now is the time to think about your #wildfire preparedness.

Customers can put their address into an interactive map to check if their residence is impacted, Gallagher added.

San Bernardino County is expected to receive high gusts of Santa Ana winds starting Saturday evening, said NWS meteorologist Brian Adams. The gusts could reach speeds between 50-60 mph and will be strongest in the southwest parts of the county near the Cajon Pass, he added.

Although highs in San Bernardino County are expected to remain in the 70-degree range over the weekend, Adams said the fire risk is exacerbated due to a combination of the Santa Ana winds and low humidity.

In Orange County, winds could reach up to 50 mph Sunday evening in Orange, Tustin, and other areas downwind of the Santa Ana Mountains, according to NWS meteorologist Dan Gregoria.

Los Angeles will have winds up to 45 mph in the 5 Freeway corridor, according to NWS meteorologist Kristan Lund, adding that the Los Angeles Mountains have a wind advisory in effect until 3 p.m. Sunday.

While no plans have been made specifically for Sunday’s forecasted conditions, San Bernardino County Fire Department Battalion Chief Mike McClintock said the agency is sending the maximum response to all vegetation fires.

As Santa Ana winds season kicks off, McClintock urged those in San Bernardino County to report downed power lines to 911 due to the  fire hazard they present. Power equipment has previously caused significant ignition risks in California’s wildfire-prone landscape and led to some of the state’s largest fires.