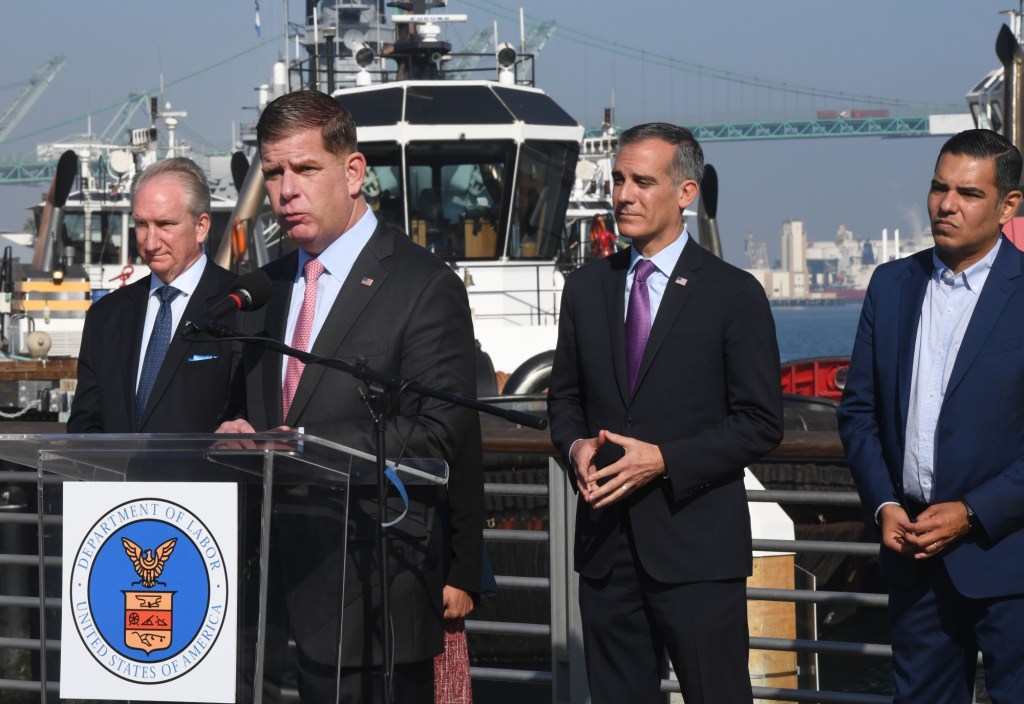 With the contentious issues of automated cargo handling, wages and benefits, few thought this year’s contract talks between dockworkers and employers would be quick or easy.

But it now appears it could be several more months before a contract is signed as negotiations have paused over a jurisdictional dispute at a terminal in the Port of Seattle.

No new talks, in fact, had been scheduled for October, though there are hopes they will resume next month, according to a source with ties to the ports of Los Angeles and Long Beach, who requested anonymity because the two negotiating parties have agreed to not publicly discuss the talks. The Journal of Commerce, a trade industry publication, was the first to report the hitch this week.

“The ILWU and PMA continue to meet regularly and negotiate local agreements and safety issues,” Adams said. “We are confident that we will reach a coastwide agreement as we have for nearly 90 years.”

When talks began on May 10, both parties agreed not to discuss negotiation details with the media.

The Seattle dispute, meanwhile, involves a terminal run by a company called SSA Marine and jurisdiction of cold-ironing work — the process by which ships hook up to shoreside electrical power.

The National Labor Relations Board is expected to consider the matter in early November, with a decision coming shortly after that, the Journal of Commerce reported.

Both the ports of L.A. and Long Beach, the two busiest, expressed confidence that a contract agreement will be reached without disruption to port operations. The two negotiating parties have signed a statement saying they will not partake in lock-outs or slowdowns during the negotiating process.

“Port operations continue without disruption and we expect this to remain so as the parties continue to work towards an agreement,” Noel Hacegaba, deputy executive director of the Long Beach port, said in a written statement.

Port of Los Angeles Executive Director Gene Seroka, for his part, said during his monthly virtual news briefing last week that both sides are being “nudged” and that U.S. Labor Secretary Marty Walsh was “staying close to both sides.”

But Seroka, who was traveling this week and could not be reached for comment, told the Journal of Commerce for an Oct. 25 article that he didn’t see the labor dispute being resolved soon, adding, “We’re probably months away.”

Concern over the lingering talks has prompted what Seroka called “a huge segment” of cargo to head for other ports on the Gulf and East coasts. But Seroka also said he had confidence that business would return to the Los Angeles-Long Beach port complex.

A Thursday, Oct 27, report from the Marine Exchange of Southern California said a new record low was set with just one container ship “backed up” as of noon that day.

The dispute in Seattle, according to JOC, centers on the ILWU determining it was not supported in a dispute with the International Association of Machinists over maintenance jobs at the SSA-operated T-5 terminal in Seattle. But that’s all part of a larger conflict over ILWU’s contention that employers have not lived up a 2008 commitment to support dockworkers in jurisdictional disputes with other unions.

In May, shortly before talks began, optimism ran high that the negotiations would go smoothly.

“From a general perspective,” PMA President and CEO Jim McKenna said then, “I think the relationship between the two sides is very healthy.”

The two parties, which have seen their share of contentious negotiations in the past, had overcome obstacles, McKenna said, and “that has solidified our ability to work together.”

The pandemic presented a particular challenge that saw the ranks of longshore workers and port terminals pulling together as cargo surged and ships congregated outside the breakwater waiting to be unloaded.

The current contract, which covers some 22,000 workers at 29 West Coast ports, expired in July and while no one expected a new agreement to be in place that soon, news of the recent hiccup will further extend the process.

Among the major points of contention overall is terminal automation but the contract will also cover pay, benefits and working conditions.

The two sides have negotiated West Coast collective bargaining agreements since the 1930s — and work stoppages have historically been rare.

Dockworkers went out on strike in 1971. In 2002, President George W. Bush used the Taft-Hartley Act to end a 10-day employer lockout of workers.

The Biden administration has been watching the process carefully. In March, four U.S. senators, all Republicans, sent a letter to President Joe Biden expressing concerns about the talks, suggesting that a lingering process could impact costs and the nation’s supply chain.

Walsh visited the Los Angeles-Long Beach ports a year ago. The labor secretary, a former mayor of Boston and a past union president, told reporters at the time that he trusted the negotiation process and would be available if an impasse occurred or he was asked to step in.