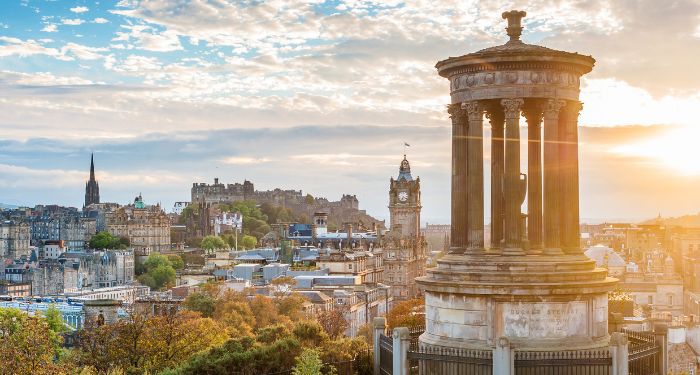 I recently spent an entire month in Edinburgh, Scotland. I had the absolute pleasure of being cast in a gender-swapped, American folk musical retelling of Pride and Prejudice called Prejudice and Pride. I played Luke Charlton, a pastiche of Charlotte Lucas. After three weeks playing in Kansas City, the show went to play at the Edinburgh Fringe Festival for the entire month of August.

I have a tradition I keep when I travel. I find and visit a local bookstore, buying at least one book and hanging onto the receipt so I know where it came from. However, spending an entire month in a UNESCO City of Literature teeming with bookstores, I wanted more of an adventure. Before I ever boarded the plane to leave the USA, I put together a list of 19 bookstores to visit: my journey through Edinburgh’s bookstores.

Not all 19 of the stores were doable. Peter Bell books had a sign in the window saying that the owner was high-risk, and so the store was closed until further notice. Sad, but totally understandable. I originally had Lighthouse Books and Word Power Books listed separately, but they’re the same store. The Bookworm was permanently closed. That still left 16 bookstores.

It wasn’t until I was writing this that I realized I completely forgot The Edinburgh Bookshop. 15 bookstores in one month. No problem.

My wife joined me for the first two weeks, which were also PTO from my day job, so I didn’t start the bookstore journey in earnest. Nevertheless, we visited Till’s after eating breakfast nearby. I found a nice, old printing of Jane Austen’s Pride and Prejudice, which seemed fitting for my first book purchase of the trip. I also snagged a little poetry book I’d never heard of, Moon-Flight and other Poems by Irvonwy Morgan.

As we were wandering down toward the Grass Market a couple of days later, I wandered into Armchair Books. It was stacked high with very old books and some recent, used hardcovers. The old book smell was delightfully strong in this one. There, I found a first printing of Ursula K. LeGuin’s Buffalo Gals and another poetry book, Bloodroot by Annemarie Ní Churreáin.

And of course, Blackwell’s was on the way to almost everything. Yes, Blackwell’s is a huge chain, like Barnes & Noble in the USA. However, this location is also the oldest bookstore in Edinburgh, having opened in 1848. I didn’t exactly feel old, but it was very nice. Braking Day by Adam Oyebanji and The Room Between Us by Denise Saul seemed just right.

Lighthouse was, hands down, the most beautifully progressive bookstore I’ve ever seen. The staff was LGBTQIA+. The shelves were dominated by progressive fiction, poetry, nonfiction, and everything else you can think of. Not only did I grab 100 Queer Poems by Mary Jean Chan and Andrew McMillan, but A Comprehensive Guide to Intersex by Jay Kyle Petersen. I FINALLY have an intersex book on my shelves!

In Reading Color Newsletter
A weekly newsletter focusing on literature by and about people of color!
Thank you for signing up! Keep an eye on your inbox.

When I arrived at Edinburgh Books, I wondered if it was actually closed. A few minutes after the official opening time, I was just a bit early. The owner rushed in, unlocking the door and flipping on the lights and turning on the radio in one motion. This shop of old books made Armchair feel modern. It was so full of personality and quirk. Old books aren’t quite my thing, but I still grabbed a book of Scottish songs.

Golden Hare was a trek up to New Town from the residence near Arthur’s Seat. It was a cute little store with a small, but mighty selection. The bookseller was a delight. I grabbed Out There: Into the Queer New Yonder edited by Saundra Mitchell and Wain: LGBT Reimaginings of Scottish Folklore by Rachel Plummer.

Near Blackwell’s on South Bridge was a comic book store called Forbidden Planet. There was something so comforting about this shop because it’s exactly like any other comic book shop I’ve ever seen. Same books, same plushies and FUNKO Pops, same nerds. I bought the first two volumes of Birthright as well as Crush and Lobo.

Since I was working my day job remotely, I could only go to one store on most days. August 20 was a Saturday, so I had my sights set on three stores on the other side of town. Topping & Company was first and wow, was it impressive. Obviously built in some old mansion, it was full of great new books in every conceivable genre. I steered away from the rare bookcase to take home Black Water Sister by Zen Cho and God, I Feel Modern Tonight by Catherine Cohen, both signed.

A little ways off I found Typewronger Books and McNaughton Books. They’re technically different stores, but connected. Typewronger is all new books and old typewriters. When I paid for Prompts by Tawnya Selene Renelle and A Psalm for the Wild-Built and A Prayer for the Crown-Shy by Becky Chambers, the bookseller offered to stamp the books and included a little origami dragon. McNaughton’s was another old bookstore. I still managed to find Summoned by Bells by John Betjeman and The Poetical Works of Oliver Goldsmith.

Portobello, Waterstone’s, and a Mistake

Since August 21 was a Sunday, a few castmates and I took a little trip up to Portobello, a cute seaside suburb of Edinburgh. I put my feet in the water, had brunch near the beach, and I dragged them to The Portobello Bookshop. This shop is mid-size and SO NICE. I was amazed that such a small community had such a brilliant shop. Elektra by Jennifer Saint and At Least This I Know by Andres N. Ordorica came home with me.

On my own later that day, I decided to make the trek to a bookstore called Cornerstone. It was a bit of a hike to the other side of Edinburgh Castle from where I was staying, but I was feeling adventurous. This is where I failed in my Google searching. Cornerstone is in the basement of a church, and it is all Christian books. If that’s your thing, cool. It’s not mine. Fortunately, Waterstone’s was on the way back. Yes, it’s another corporate bookstore, but it’s a bookstore. I felt better about the trip after grabbing Blue Horses by Mary Oliver and My Monticello by Jocelyn Nicole Johnson.

Sitting right on Victoria Street (a big tourist trap) is John Kay’s Store. It was a bit disappointing. This tiny shop has books, sure, but they’re squarely aimed at tourists. Children’s books based on Scotland, journals, and Scottish recipe books dominate. I did grab a pretty journal and a book of winter cocktails, but nothing else.

Transreal Fiction was the last shop on my list, a store with strange hours and only selling sci-fi and fantasy. After visiting Rosalyn Chapel, I walked to it from the bus stop. The selection was disappointing, but I still found The Half Life of Valery K by Natasha Pulley.

All of that brought us to closing night of our show, in which our lead (and banjo player and co-writer of the show) tested positive for COVID-19, ending our run one night early. After flying home, I, too, tested positive. That wasn’t fun.

That said, I managed to make it home with 28 new or new-to-me books and a litany of stories to tell. That was a lot of fun, and I still have most of them to read.