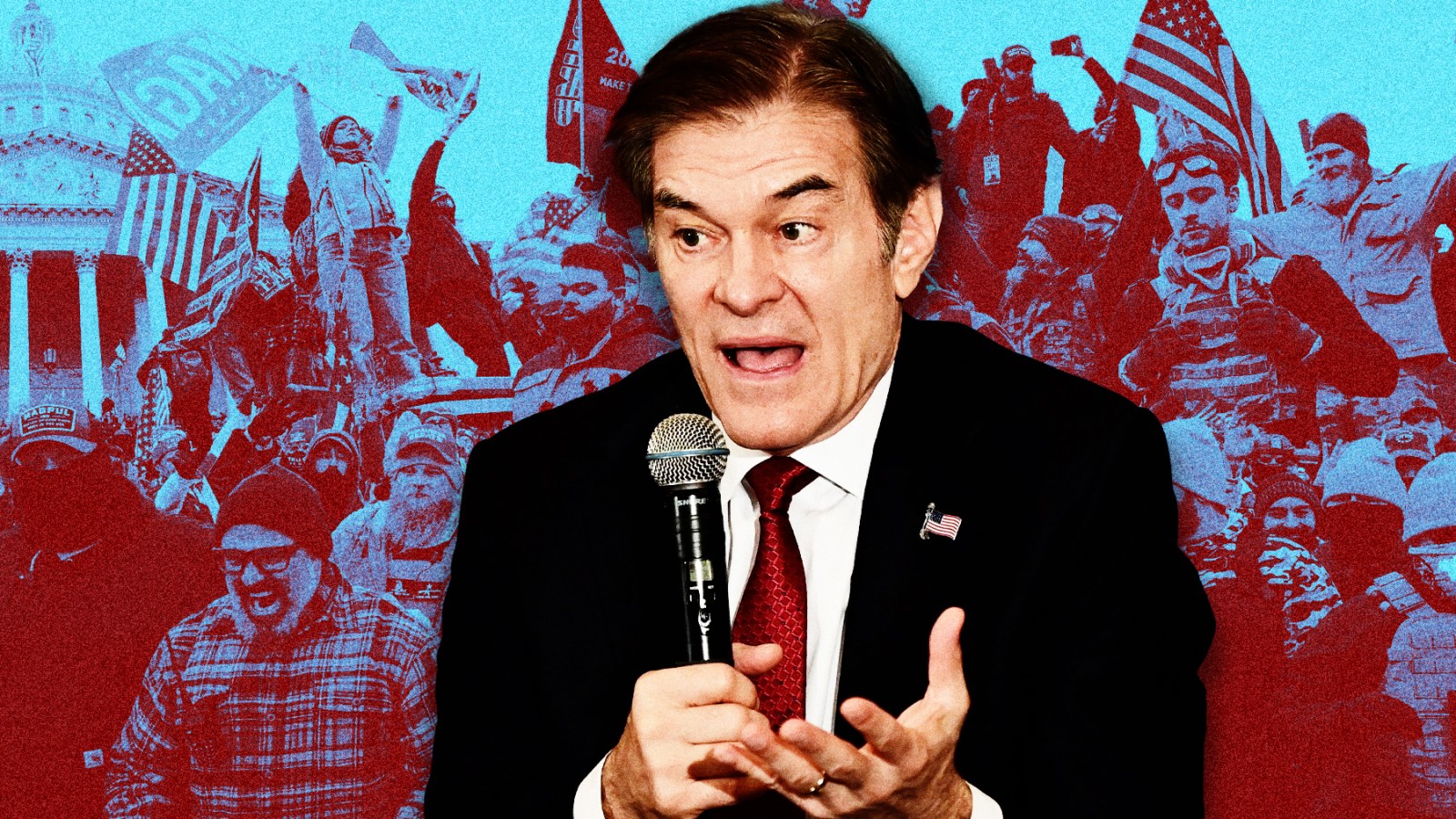 In his run for Pennsylvania’s open U.S. Senate seat, Mehmet “Dr.” Oz has tried to convince voters that — despite his close ties to Donald Trump — he’s moderate enough to represent their battleground state. Most notably, while the former president falsely insists the 2020 election was stolen, Oz has at times recognized its legitimacy.

Oz’s tact is a departure from the state’s other high-profile Republican, Doug Mastriano, who’s running for governor with a rapturous embrace of Trump’s election lies. But it’s Oz’s approach that appears to be working: While the polls show Mastriano floundering, Oz is running a close race against Democrat John Fetterman.

But while Oz pays lip service to the 2020 election results, he has quietly loaded up his 2022 campaign with true believers in Trump’s “Big Lie” — including ones who attended Trump’s infamous Jan. 6 rally aimed at nullifying Joe Biden’s victory.

According to records reviewed by Rolling Stone, at least two Oz campaign staffers attended Trump’s Jan. 6 “Stop the Steal” rally in Washington, D.C. The rally, in which Trump declared the election stolen and encouraged supporters to “fight like hell” to pressure Vice President Mike Pence to overturn it, directly preceded the deadly Capitol riot. 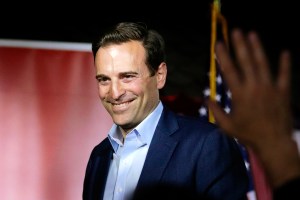 Lee Snover, described as Oz’s campaign coordinator for Northampton County, attended the Jan. 6 “Stop the Steal” rally on the mall and said she walked to the Capitol that day but did not trespass on Capitol grounds. “I got to the Capitol steps,” she told Lehigh Valley Live that day. “The only violence I saw were the police teargassing patriots for no reason.”

Neither Snover nor Oz’s campaign responded to multiple requests for comment.

Snover, who serves as Northampton County GOP chair, does not appear in Federal Election Commission records as a paid Oz staffer, but she has been identified as Oz’s local campaign coordinator in media reports.

Four days before she attended Trump’s “Stop the Steal” rally in D.C., Snover participated in a Zoom call with hundreds of state legislators from swing states where Trump, Rudy Giuliani, Peter Navarro, and John Eastman laid out plans on how to “decertify” their states’ results and stop the counting of electoral votes in Congress.

“It was an informative call. It was all fact-based, informative. It was really not even a political call,” Snover said in a conservative-talk-radio appearance two days before the insurrection. In the interview, Snover dismissed state election officials as unpersuadable and said that Republicans’ focus should remain on getting state legislators to urge Pence not to count their state’s votes. “That’s why we need the state legislators to do it. The secretaries of state are never going to change it.”

Another Oz staffer, Josh Bashline, who serves as a paid political adviser, also attended Trump’s Jan. 6 “Stop the Steal” rally, according to an interview he gave to a local newspaper. Bashline initially helped the Oz campaign as a volunteer poll watcher during his primary contest with David McCormack, but FEC records show the staffer stayed on the payroll at least as recently as Sept. 30.

The discrepancy between Oz and his staff on Trump’s election lies mirrors Oz’s own double-speak on what really happened in 2020.

During his narrowly won Republican primary run, Oz leaned heavily into rhetoric that the election still needed investigation — and that 2020 was an event “we cannot move on” from. But after the primary, the TV doctor said he wouldn’t have joined potential colleagues like Josh Hawley and Ted Cruz in trying to overturn Biden’s election victory. “I would not have objected to it,” Oz told a press conference about former Vice President Pence’s counting of electoral votes in the Senate.

Behind the scenes, there have been times, however, when Oz and his chief advisers have tried to assure some current and former Republican allies that the candidate supports American democracy.

In text messages obtained by Rolling Stone, Larry Weitzner, a top ad-maker for Trump’s presidential runs and a Team Oz consultant, debated Rabbi Shmuley Boteach, a media figure and player in conservative pro-Israel circles, on May 2 on whether or not Dr. Oz is truly a Trumpist election denier. The celebrity rabbi was once a close friend and adviser to Dr. Oz, but has since turned on the MAGA-fied doctor and calls the Senate campaign “grotesque, ”a waste,” and worse.

As Rabbi Boteach was repeatedly lambasting Dr. Oz for being an “election denier,” Weitzner shot back, “I live in [Pennsylvania], I saw firsthand the shit going on. But he is not denying the [2020] election.” When the rabbi replied, “Election fraud is an election denier. You’re playing games,” Weitzner texted, “Massive difference between saying their [sic] was fraud, which most Republican officials and voters believe as well as real evidence, [versus] saying the election was stolen or denying Biden won.”

According to these texts, Weitzner also messaged Rabbi Boteach: “[Oz] doesn’t deny the results of the election. Says we need to learn from it and make changes in how the elections are run. In [Pennsylvania] it was totally screwed up with unmanned drop boxes and paper ballots sent to millions of voters many of who had not voted in years and did not ask for them.”

“Not an election denier,” Weitzner insisted to Rabbi Boteach, sticking up for Oz, who has on-and-off publicly embraced Trump’s fabricated narrative of a “rigged” election.

In early September, the congressional committee investigating the Jan. 6 Capitol riot released a Dec. 8, 2020, email they said was sent by Trump ally and former House speaker Newt Gingrich, to Weitzner and senior Trump lieutenants. The email reads: “The goal is to arouse the country’s anger through new verifiable information the American people have never seen before,” and, “If we inform the American people in a way they find convincing and it arouses their anger, they will then bring pressure on legislators and governors.”

How Oz feels about democracy may prove critically important to its ongoing existence in the United States. His race with Fetterman is one of a handful that will decide control of the Senate in 2022. And if Oz wins, he’ll be a prominent Republican official in a state that Trump is already preparing as ground-zero for election-fraud claims in 2024. Rolling Stone reported last week that Trump and his allies plan to push fraud claims in Philadelphia during, and after, the midterms — and that Trump views that effort, in the words of one knowledgeable source, as a “dress rehearsal for Trump 2024.”

But Oz’s difficulty keeping a consistent position on the 2020 election illustrates the dilemma many candidates now face in reconciling their own rhetoric with Trump’s conspiracy theories. The former president’s lies have shaped state parties, which normally serve as a bench for campaign staff. And the ex-president and his allies have not hesitated to punish candidates who don’t share their view: When MAGA favorite Mo Brooks said his party needed to put 2020 “behind you,” Trump helped doom Brooks’ 2022 U.S. Senate primary run in Alabama — saying the candidate had turned “woke” and rescinding his endorsement.

In Pennsylvania, Republicans who endorse Trump’s election lies are ascendant. The state GOP has 10 election deniers running for office at the state and federal level, according to a count by FiveThirtyEight, and Republicans in the state legislature are still pursuing a conspiracy-theory-fueled investigation into the 2020 election nearly two years later. Chief among them is Mastriano, who organized bus trips to the Jan. 6 “Stop the Steal” rally and faces a subpoena from the Jan. 6 committee for his efforts to overturn the election.

Almost immediately after Trump stepped out of office early last year, the ex-president turned Republican acceptance and promotion of his election lies into a litmus test for, among other factors, earning his coveted endorsement ahead of the critical 2022 midterm races. Earlier this year, the former president became increasingly convinced that Oz would, as Rolling Stone reported, “fucking lose” in Pennsylvania, joining a chorus of prominent Republicans who were loudly sounding the alarm. One source of Trump’s annoyance with Dr. Oz at the time was that the ex-president did not feel his Senate candidate — unlike Mastriano — was being aggressive enough at defending Trump’s election propaganda.

However, as Oz has closed the public-polling gap with Fetterman in recent months, Trump and the GOP are now much more bullish on Oz’s chances. And the party, and its leader, have already started planning for possible 2022 election challenges and legal battles following Election Night in November, especially if there are tight races — with Pennsylvania cities and Democratic bastions like Philadelphia squarely in their sights.

Regardless of whether a court fight ultimately materializes, the Democratic Party is gearing up for war. The Daily Beast reported on Friday that this week, the Democratic Congressional Campaign Committee emailed the party’s candidates in the Keystone State to “identify a local attorney for your campaign,” to be at the ready on, as well as after, this year’s Election Day. According to FEC filings, the Fetterman 2022 campaign has retained the services of Marc Elias’ law firm. In the chaotic aftermath of the 2020 presidential contest, Elias was the prominent attorney for Team Biden and national Democrats in combating the multistate Republican legal effort to keep Trump in power.

“As we saw in 2020, and will certainly see in 2022, Republicans’ attack on voting will not stop after Election Day,” Elias predicted this month. “They will use every tool available to contest elections and avoid concessions.”

‘TikTok traffickers’ who use videos to advertise Channel crossings must face criminal action – MP
Hackers Sign Android Malware Apps with Compromised Platform Certificates
Grumpy / Sunshine Duo Books for Fans of Wednesday and Enid
Best Gift Ideas For DC Comics Fans During Holiday Season 2022
What is Alzheimer’s, how common is it – and will new drug lecanemab help patients in the UK?