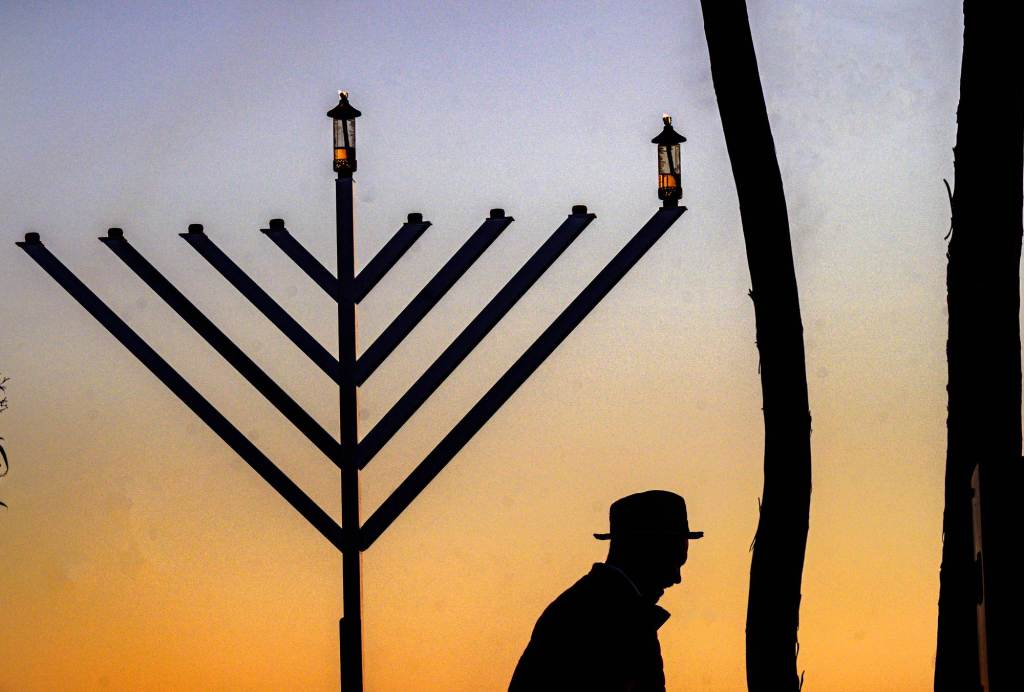 Los Angeles has seen a spate of antisemitic incidents — from flyers, to graffiti, to freeway banners and Nazi salutes — in the weeks following Kanye West’s attacks on the Jewish people.

But this spike in hate is not emerging from a vacuum.

Data on the number of reported antisemitic incidents indicate a steady increase in Los Angeles County over the past several years.

Los Angeles area antisemitic incidents rose by 29% from 2020 to 2021, according to data compiled by the Anti-Defamation League — and by 217% from 2017 to 2021. Recorded incidents of harassment, vandalism and assault in Los Angeles reached an all time high of 182 last year.

“This is an epidemic of a totally new kind, an insidious epidemic of hate,” ADL Los Angeles Regional Director Jeffrey Abrams said at a LA mayoral candidate forum on Saturday, Oct. 26. “Here in Los Angeles, we witnessed 14 assaults (in 2021) where Jews were assaulted viciously.”

The Southland has seen a number of high-profile incidents this year alone, from Pasadena to Manhattan Beach, from Westside LA to San Pedro.

Ivan Wolkind, chief operating and financial officer of the Jewish Federation of Los Angeles, attributed part of the increase in antisemitism to a general feeling of crisis because of the pandemic, tough economic times and political polarization.

“In times of crisis, I think it’s well documented that people look around for someone to blame,” Wolkind said. “(People) often just revert back to old tropes and look for old enemies, and Jews unfortunately are a very available and very well-versed victim.”

Wolkind and several other Jewish community leaders have attributed the spike in incidents in recent weeks, at least partly, to remarks by Kanye West, who has not responded to requests for comment.

His comments have also spurred fears that the Jewish community of color could be particularly vulnerable to antisemitism.

Yet, despite these worries, officials say, the only way to combat antisemitism is to continue educating as many people as possible about the dangerous nature of antisemitic rhetoric and actions. And in response to the recent spate of incidents, the Los Angeles City Council voted 11-0 on Tuesday, Nov. 1, to adopt the International Holocaust Remembrance Alliance’s working definition of antisemitism.

West – whose online followers are greater in number than the entire global Jewish population – made hateful remarks on social media and in interviews during October, including a vow to “Go death con 3 on JEWISH PEOPLE” on Twitter, before he was banned from the platform. West has said his anger against Jews stems from bad business dealings with Jewish executives in the entertainment industry.

West has been dropped by talent agency CAA. A representative in the client services department there said she could not give out any contact information, as the agency no longer represents the rapper. Neither West nor his representatives have returned multiple requests for comment on various social media platforms.

But on Oct. 22, a hate group gave Nazi salutes on a 405 Freeway overpass, where they hung several antisemitic banners, including one that read “Kanye is right about the Jews.”

“What he (West) did here was he accelerated the views of this very, very small splinter group,” Wolkind said, “and put them on the national stage.

In the past two weeks, antisemitic flyers blaming gun control measures and the government response to COVID-19 on the “Jewish agenda” have been found in Westwood and Beverly Hills.

And earlier this month, similar flyers were left on doorsteps in Pasadena and San Marino at the start of the Jewish holiday Yom Kippur.

“These disgusting and evil acts of blatant antisemitism and Jew hatred hits me to the very core and fiber of my being,” Beverly Hills Mayor Lili Bosse said in a written statement. “As a daughter of a survivor of the Auschwitz death camp, I will always bear witness and speak loudly without fear. While this is being described as Free Speech, this is Hate Speech that is meant to divide us and intimidate us.”

While hate speech is protected under the First Amendment, such protections end when the speech becomes threatening or defaces property — a line that seems to have been crossed in other examples of antisemitism across LA County.

In the Pico-Robertson neighborhood of Los Angeles, for example, an orthodox community leader was walking to synagogue with his wife recently when, he said, someone driving a car slowly down the street cursed loudly at him and every other Jew in sight.

Police have investigated at least some of those incidents. And the district is seeking to address the graffiti by installing security cameras, increasing monitoring of students’ internet activity, and adding more educational resources on the Holocaust and Jewish history.

“I have lived in the Manhattan Beach community for 27 years and I can tell you that it’s the most tolerant, loving city that I’ve ever lived in,” said Yossi Mintz, executive director and Rabbi of Chabad of the Beach Cities, adding that he wants to see more police action to identify those responsible for the graffiti. “These are new events that are taking place in the last six to eight months.”

“There is an outpouring of Jews and non-Jews,” he added, “saying this is a stain on this community.”

Yet, the graffiti has continued — as recently as Oct. 26. That’s when graffiti touting Adolf Hitler was found in Manhattan Beach’s Polliwog Park.

But besides generalized fears about an uptick in antisemitism, some Jewish leaders are also concerned about the impact of West’s comments on Jews of color and on efforts to create unity among Jews and other minority groups.

Some of West’s statements pit the Black community against the Jewish community, such as his claim that “Jewish people have owned the Black voice.”

In the Los Angeles area, around 32,500 Jews identify as people of color, representing 6% of the Jewish adult population and 9% of Jewish children, according to a 2021 study by the Cohen Center for Modern Jewish Studies at Brandeis University.

The study also found that around one-third of Jews of color reported experiencing antisemitism in 2021, compared to 18% for the overall adult Jewish population.

Nate Looney, the director of community safety and belonging at the Jewish Federations of North America, said this is something he has personally experienced.

“As a Jew of color, it’s something that people aren’t always accustomed to seeing,” he said, “and so by wearing a kippah, I know that there’s additional attention that I may not want that can come as a result.”

“For a lot of Jews of color, the assumption is we are not Jewish,” he added, “so people may feel safe to say things that are antisemitic around us, not realizing that we are actually Jewish and this is something that that is impacting us.”

Shai Shoor, who is also a Jew of color in Los Angeles, is a founder of the Love is Real Movement, which among its humanitarian goals seeks to increase unity between the Black and Jewish community through acts of kindness.

The group hosts food and supply drives for those who are homeless, donates food to underprivileged communities and speaks out against antisemitism and attacks on other minority groups.

“For years, we have been relatively quiet about the initiatives and the work that we’ve been doing with Black communities,” Shoor said. “We definitely need to give a platform for Jews to be more vocal about what they do to help bridge the divide.”

Yoni Robin, president of the Young Sephardic Community Center in West LA, echoed these comments and said that Jews openly and kindheartedly engaging with all groups of people is “the most organic, effective way to bridge the gap.”

Robin, who is an orthodox Jew, has felt the sting of antisemitism personally.

“One Saturday, I was walking to synagogue with my wife around 8:30 in the morning and there was a guy who was just slowly driving down Pico Boulevard cursing out every Jew,” he said. “We take a lot of more security precautions (at the synagogue) because of things like that and different people in our community having their own similar experiences.”

In addition to interpersonal and grassroots efforts, there are large organizations fighting antisemitism in Los Angeles.

The Jewish Federation of Los Angeles runs a Community Security Initiative, which helps protect more than 300 synagogues, schools and other institutions across Los Angeles through critical incident coordination, intelligence sharing and security training. The group also has a community engagement group that works with elected, religious and community leaders to combat all forms of hate.

The ADL runs the Echoes & Reflections program, which trains educators how to teach about the Holocaust and antisemitism, and the No Place for Hate initiative, a peer-to-peer program that seeks to foster cultures of inclusivity and respect in schools across America.

The league was also a key proponent of Assembly Bill 587, which Gov. Gavin Newsom signed into law on Sept. 13 and requires greater transparency on how major social media platforms moderate hate speech.

And a coalition of Manhattan Beach organizations will launch MB vs. Hate Week from Nov. 13 to 19, aligning it with the national United Against Hate Week.

While these initiatives do important work, recent events indicate that these groups face an uphill battle in the fight against antisemitism.

“This year is tracking to surpass the numbers (of antisemitic incidents) from last year,” Abrams said. “So we have to prepare that things will continue to get worse. But we will keep fighting to make a better world we’re all safer in, we’re all happier in and in which we can all live together.”