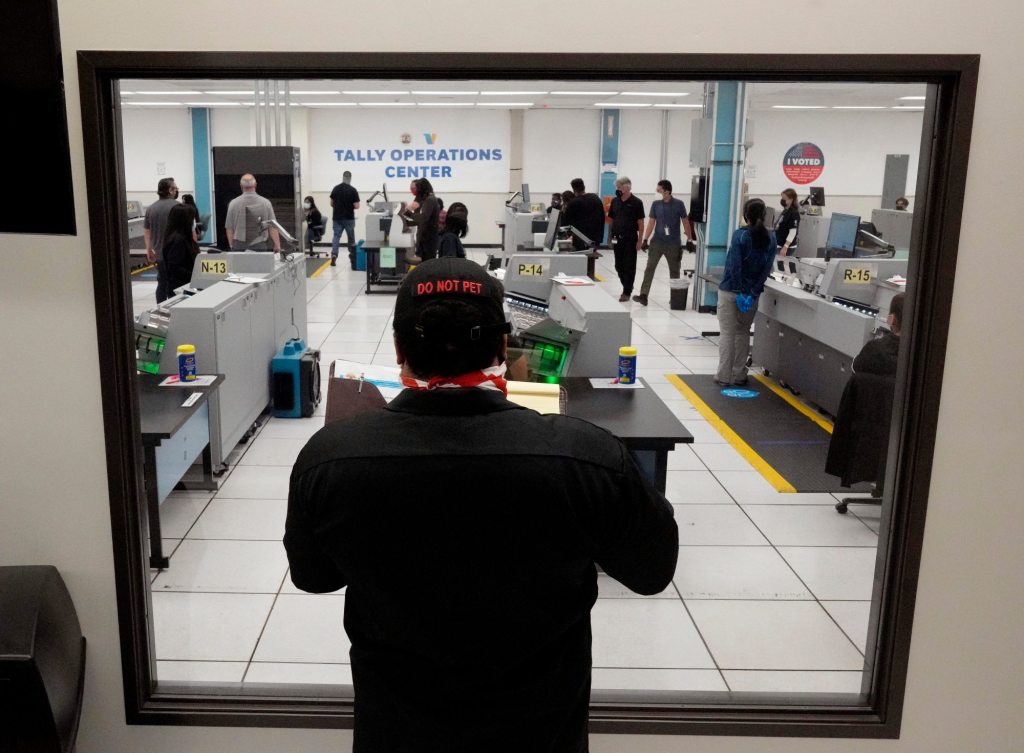 The practice dates to the 18th century – and has historically served as a mechanism for watchdogs to ensure election fairness.

But as the Tuesday, Nov. 8, midterm election has drawn near, election officials and experts have noted increased interest in observing every step of the ballot-counting process, from picking them up from drop boxes to running them through the computer.

While many poll watchers have a sincere desire to protect the democratic process, much of the increased interest, election officials and experts say, has been driven by partisanship, largely stemming from the false claims of fraud from 2020 election deniers — namely former President Donald Trump.

That, in turn, has spurred fears of voter intimidation and other potential disruptions on Election Day.

In Los Angeles County, however, such disruptions have not occurred since Voter Centers opened on Oct. 29, officials said  – at least not yet.

“It’s been peaceful,” LA County registrar spokesman Mike Sanchez said this week, “at least to the extent I know.”

Yet, as long as poll watching has been an American tradition, so has partisanship among election observers.

Before the U.S. adopted the Australian ballot — in other words, the uniformly printed and serialized ballots we’re familiar with today — in the late 19th century (though adoption wasn’t unified), polling places would offer different ballots by party. Those ballots were often visually distinguishable.

“They could look through the window and see whether a (voter) had dropped in the party ballot,” Cal State Long Beach political scientist Matt Lesenyie said in a Thursday, Nov. 3, interview. “Even if you took both (ballots) from the political operative outside the polling place, it was a way for machine politics to monitor and ensure the result.”

That’s just one example of how U.S. elections used to be far-less secure and free from partisan influence, Lesenyie said.

But that was during the height of the Tammany Hall era. And before the regulations baked into the fabric of contemporary elections came about, the arrival of which led to the rise of a different type of election watchdog – third-party observers, such as poll watchers.

In Los Angeles County, poll watchers are free to observe all stages of the election process, from in-person voting to post-election audits.

But they’re prohibited by state law from interfering with the election process, including by challenging a person’s right to vote, collecting private data and campaigning at polling places, among other rules, according to the LA County registrar’s office.

That’s different from some states, in which poll watchers are legally allowed to challenge a person’s voting eligibility or the validity of ballots.

Any individual can show up to a polling place and observe the process on Election Day, Sanchez said — no application required. But for those who want to watch behind-the-scenes vote counts and collection at LA County operations facilities, there are few extra security measures in place.

“They do have to check in, we provide them a badge and we have dedicated staff on site at those locations that escort them around the operation,” Sanchez said. “It’s called an observation —  and that’s exactly what they’re allowed to do.”

Orange County, San Bernardino and Riverside counties provide similar guidance to their observers on their websites.

But as election laws and regulations have evolved, Lesenyie said, so has the perversion of poll watching.

During a 1999 city election in Hamtramck, Michigan, for example, upwards of 40 individuals were forced by election officials to take an oath declaring their citizenship in order to cast their ballots after a group of poll watchers — called Citizens for a Better Hamtramck — challenged their right to vote because they had “dark skin and distinctly Arabic names,” according to a U.S. Department of Justice document.

A federal examiner was appointed to oversee that city’s elections through 2003, and the city agreed to a series of new processes meant to prohibit further voter intimidation at the polls.

A federal court banned the RNC from employing poll monitors the following year — and only overturned that ban in 2018.

Leading up to the 2020 presidential election, the RNC mounted a campaign to mobilize upwards of 50,000 poll watchers across 15 states to monitor polling places and challenge voters they considered suspicious, according to the New York Times.

Those efforts were bolstered by then-President Donald Trump claiming, with no evidence, that voter fraud would prevent him from winning a second term — and directing his supporters to “go into the polls and watch very carefully,” which sparked voter security concerns nationwide.

Trump and his followers have continued to baselessly claim the 2020 election was stolen, and have preemptively suggested that voter fraud will be to blame if Republicans lose the upcoming midterms.

Election and law-enforcement officials across the country have responded by warning of potential disruptions or voter intimidation — particularly after officials said individuals armed with weapons have shown up to ballot drop boxes in Arizona — just days ahead of the Nov. 8 election. The FBI, specifically, has cautioned about potential threats to election workers and other election crimes.

“It has kind of turned into a thing that’s related to our politics about who belongs,” Lesenyie said. “Some of these poll watchers are just straight up partisan — and they are looking to exclude certain types of voters.”

The California Democratic Party’s voter protection team – which boasts a hotline, attorneys and poll watchers – is the largest in the country, according to a September announcement. The party said then that its voter protection team had already fielded more than 300 calls to its hotline. (A spokesperson did not respond to a request for updated figures.)

Harmeet Dhillon, who oversees the California GOP’s election integrity operation, said the party has trained more than 4,500 “election integrity volunteers” this year. That operation has also provided information to thousands of Californians on how to be a poll worker or more actively involved in the election process, Dhillon said.

“We’re in communication with them throughout – during, before and after – the election season,” Sanchez said, “So they will let us know, most of the time in advance, if they’re going to have individuals observe an election.”

It’s unclear exactly how many people the LA County Democratic Party plans to send out to watch the polls on Tuesday. They did not respond to requests for comment.

But in Los Angeles County, the situation leading up to Election Day appears relatively calm.

Both the Los Angeles Police and Los Angeles County Sheriff’s departments said on Thursday that they hadn’t received any reports about voter intimidation since polling places opened.

“We haven’t seen anything recently,” Sanchez also said, “that would be cause for any type of alarm.”

And despite the issues within poll watching —  the institution itself still serves a valuable purpose.

“If you don’t have the ability to observe and make sure the processes are happening correctly, that (results in) a big gap,” said Pam Smith, president of the nonprofit Verified Voting, “and people will fill in gaps in information with whatever they imagine.”

California, for its part, currently exceeds federal election security requirements, according to the Secretary of State’s office.

Votes are cast on paper ballots or have a voter-verified paper audit trail. Equipment used to count and cast ballots has to be certified and kept offline.

In Los Angeles County, ballots are placed in sealed boxes once the polls close on Election Day. Workers account for unused ballots, and separate out vote-by-mail ballots and provisional ballots.

Then the ballots are transported to designated check-in centers around the county, where they are collected by sheriff’s deputies who take them to the Tally Operation Center in Downey – by boat, car or helicopter.

Once in Downey, the ballots are checked in and inspected prior to tabulation.

“Paper trails associated with paper ballots allow for prompt detection of possible intrusions into the voting process,” the Secretary of State’s website says. “Further, as a safeguard to ensure votes were accurately read and tallied, county elections officials are required to conduct a manual tally of one percent of the precincts as part of the official canvass of election results.”

So no matter the results of the Nov. 8 election, voters in Los Angeles County and elsewhere can be sure the democratic process was fair, secure and accurate.

They can also be sure poll watchers will be part of that process.

Poll watchers – like elections themselves – are, after all, an American tradition.

The Associated Press contributed to this report.

What’s being done about ‘murder-for-hire’ sites on the dark web, and how dangerous are they?
These Southern California candidates will make history with election wins
Jason Eady and Adam Hood Hold Onto Hope in ‘Broke Not Broken’
Jeffrey Epstein Accusers Sue the Banks That Did Business With Him
Daddy Yankee Thinks Myke Towers’ ‘Ulala’ Will Be a ‘Global Hit’ — So He Joined For a Verse