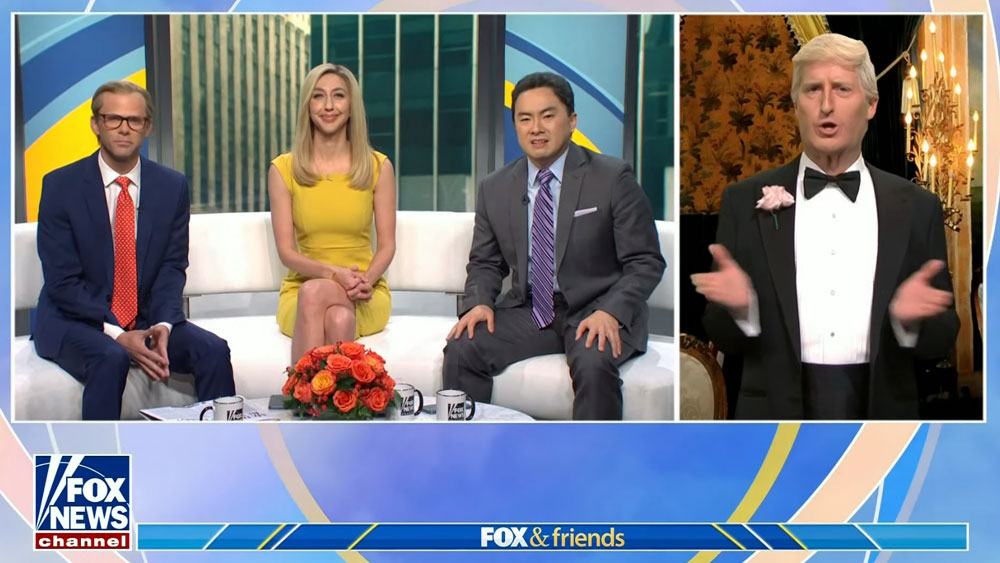 As Rupert Murdoch-owned outlets noticeably pinned the blame for the Republicans’ midterm losses on Donald Trump, Saturday Night Live spoofed Fox & Friends as its tried to break the news to the former Celebrity Apprentice host that he was no longer their favorite guest.

“Mr. President. I don’t know how to tell you this. But we have moved on. We can’t have you on the show anymore,” Fox & Friends co-host Ainsley Earhardt (played by Heidi Gardner) told Donald Trump (James Austin Johnson) in the aftermath of the Republicans dashed hopes of a red wave.

“What? What did I do?” Trump asked them. “Was it the insurrection?”

He then goes through a series of moments of the past seven years that had many in the media predicting his demise — the impeachment, “blackmailing Ukraine,” Charlottesville, an unbuilt wall — only to see him in the GOP’s continued embrace, and with it Murdoch’s empire.

“It’s because you lost. Mr. President. We just don’t see a future with you. But we can still be friends,” Steve Doocy (Mikey Day) told him.

Then Trump scrambled to stay on the air. “Hey don’t push me off!” Trump said. “I have a big announcement and it is not what you think. I am running for president again.”

The Fox News hosts don’t listen and wave goodbye to The Donald.

“That was awkward, but we are finally free. Change is on the horizon and I have a pretty good idea that we won’t be hearing from him again,” Doocy said, before he notices Trump calling his cell phone. Then, Brian Kilmeade (Bowen Yang) gets a call from the ex-president, before Kari Lake (Cecily Strong), the Arizona gubernatorial candidate and Trump protege, suddenly made an appearance on the Fox & Friends set.

“You think if I lose I am going to go away? Not on your life,” Lake said.

The Democrats’ unexpectedly strong midterm performance, one of this year’s biggest political stories, made it almost a certainty that SNL would tackle it in some fashion. They chose to go with a cable news spoof, a pretty common cold open premise, and drew on Johnson’s talent for mimicking Trump and his streams of consciousness. In reality, when Trump was president, his call-ins to Fox & Friends would go on for so long that the hosts seemed to be trying to remind him that he must have more important work to do.

In the latest skit, Johnson’s Trump wasn’t all that different from the real Trump’s Truth Social rants, particularly when going off on the new emerging darling of the right and Trump rival, Ron DeSantis. “I made Ron DeSantis. He was going to lose, until I sent FBI agents to go and fix his election,” Trump told the hosts.

The highlight of the skit was Strong’s return playing Lake, the former TV anchor and election denier who had acted as if she would surely win the race. Instead, she still trails Democrat Katie Hobbs in the vote count. “It’s my belief that the election was rigged and the results should be thrown out,” Lake told the Fox & Friends hosts, pivoting to a different take when told that she has a narrow lead.

“Which is why I have always said, this is a democracy. Trust the system. Trust the voters,” Lake told the hosts.

SNL writers also got a dig in at Lake’s use of gauzy filters. “Who do Arizonans want leading them? Katie Hobbs, who is hiding in a basement, or me, Kari Lake, who lives right here in this pool of Vaseline, and who is out there every single day at CVS, asking Black customers if they work here,” Lake said.

The cold open also featured a news update, as Doocy referred to Democrats retaining control of the Senate. Earlier in the evening, networks really did call the Nevada Senate race for Catherine Cortez Masto, assuring that Democrats will have 50 seats to maintain the majority. Control of the House still is uncertain.