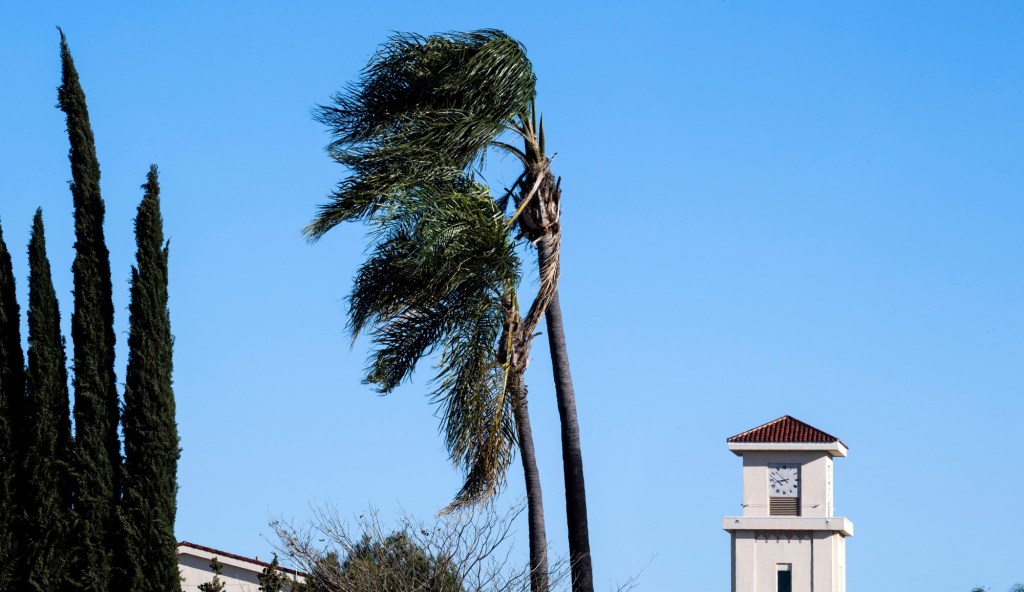 Southern California can expect the first strong Santa Ana winds of the season next week, the National Weather Service says.

Gusts could reach 65-75 mph in the LA County foothills and in the I-5 corridor, including the Cajon pass, Thompson said.

Though October and early November have been tame, strong gusts are normal at this time of year. The Santa Ana wind season typically runs from October through January.

Meanwhile, a different, northerly wind system is blowing in with some cool temperatures this weekend, though it won’t pack the punch of the Santa Anas, forecasters said.

The humidity will drop into the 8-15% range next week, elevating the risk for wildfires, though the recent rains could mitigate that, Thompson said. Temperatures should warm to the low to mid-70s.

In Orange County, Fullerton and Anaheim can expect 30-40 mph gusts; with Huntington Beach and Newport Beach seeing winds in the 25-35 mph range, according to NWS meteorologist Samantha Connolly.  Winds will be stronger in the Santa Ana mountains.

Across the Inland Empire, gusts will likely top 30-40 mph, Connolly said, reaching 60 mph in the mountains. Hemet and Lake Elsinore could see more wind than other spots, including Riverside and Temecula.

Wind will be the main weather story for #SoCal the next few days.

Tonight-Sun:
– Gusty N winds (35-50 MPH) across southern SBA county and the I-5 Corridor

It’s going to get a bit windy out there! 🌬️

Santa Ana winds are expected Tue-Thu next week, peaking in strength on Wed.

Dungeons and Dragons Rulebooks on Sale for 60% Off Today!
Watch Bella White Cover The Hell Out Of “Travelin’ Soldier”
Is your household eligible for government’s £1bn scheme to insulate middle-income homes?
Jeffrey Epstein Accusers Sue the Banks That Did Business With Him
15 Short Graphic Novels For When You Lack The Time To Read