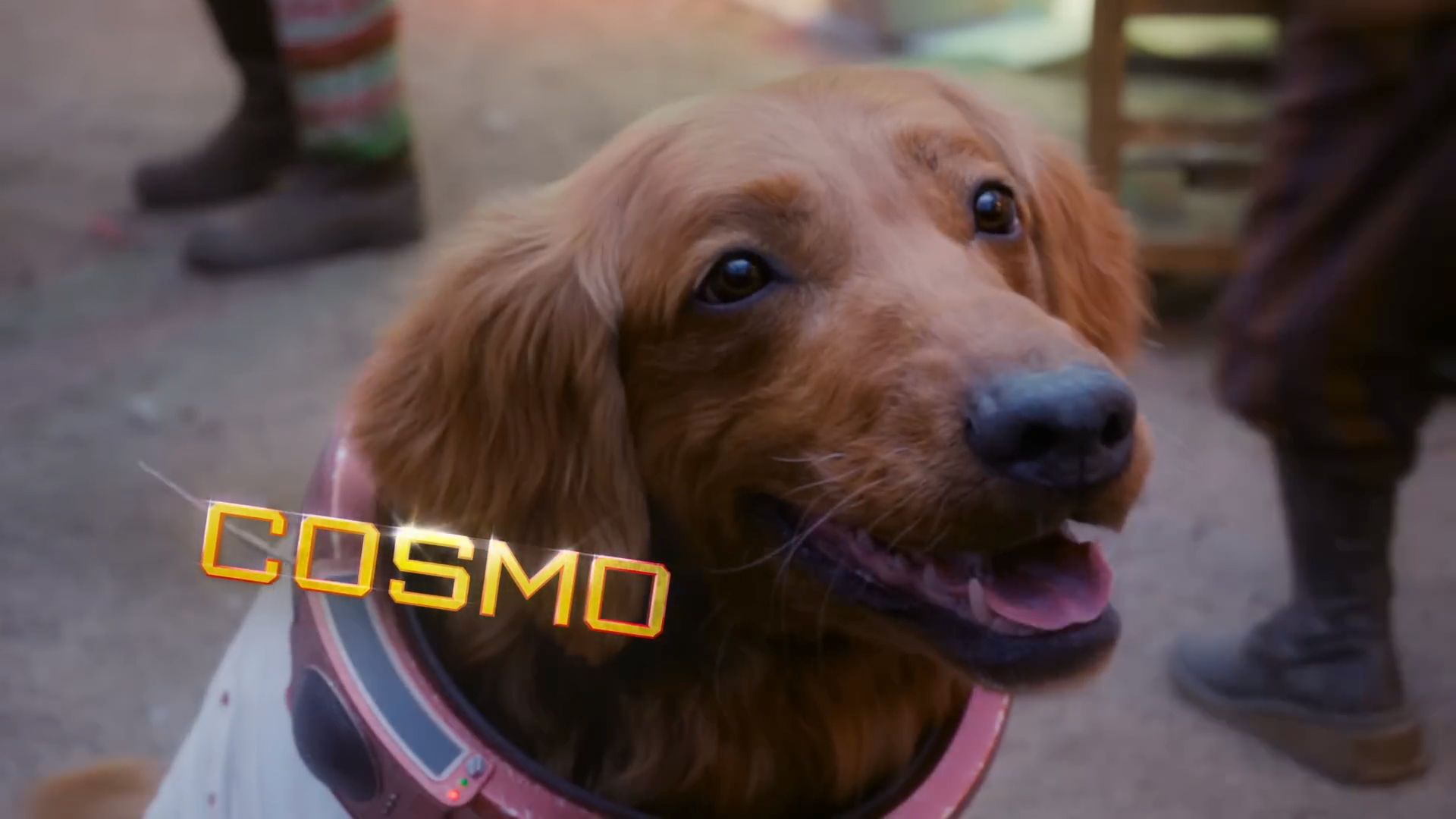 Although Cosmo is canonically male in Marvel Comics, she was mistakenly misgendered by Howard the Duck (then voiced by Seth Green) when she licked the face of The Collector (Benicio del Toro) in the first Guardians of the Galaxy movie. Gunn has made Cosmo female in The Guardians of the Galaxy Holiday Special, where she’s voiced by Borat 2’s Maria Bakalova. Her appearance doesn’t come as too much of a surprise, as Bakalova was confirmed at Comic-Con 2022 and Cosmo was teased in the Special Presentation’s marketing campaign and trailer. Here, she’s seen hanging out with the Guardians, who’ve recently taken up a new base of operations in Knowhere.

What is Cosmo’s Backstory in Marvel Comics?

Much like how Gunn told ComicBook.com we’re getting Rocket Raccoon’s backstory in Guardians of the Galaxy Vol. 3, we could also soon find out how Cosmo came to be in Taneleer Tivan’s (The Collector) museum of curiosities. In the comics, Cosmo was sent into space as a test animal for the Soviet Space Program (СССР). After finding himself marooned on Knowhere, Cosmo developed powers of telekinesis due to his exposure to cosmic rays. We know his MCU counterpart follows at least some of this, as Cosmo uses her powers to bring treats to her mouth. Although unconfirmed, it’s likely she has a universal translator to communicate with the rest of the team.

The Real Inspiration for Cosmo

In an era where the MCU is being lambasted by toxic fans for giving every hero a female counterpart (we’re looking at the She-Hulk haters), Gunn has defended the decision to gender-flip Cosmo. When created by Dan Abnett and Andy Lanning for 2008’s Nova Vol. 4 #8, the male cosmo was based on the real-life Soviet space dog called Laika. Sent into space by the Russians in 1957, Laika tragically died and was never intended to return to Earth. Details of her death weren’t made public until 2002, while scientist Oleg Gazenko has previously expressed remorse over her death and admitted they didn’t learn enough about animals in space to warrant her sacrifice.

Posting on Twitter in July 2022, Gunn reiterated that making Cosmo female is returning to the source material and the story of Laika. Even recently, Square Enix’s Marvel’s Guardians of the Galaxy game featured Cosmo as male – albeit in charge of a litter of puppies at Knowhere. Speaking of which, comic book Cosmo is known as the Chief of Security in the floating Celestial’s head. We don’t get to know whether this is her position in the Holiday Special, but it’s a potential plot point moving forward.

What’s Next for Cosmo in Guardians of the Galaxy Vol. 3?

At least we know Cosmo is now free from The Collector. She’d escaped her cage when the Power Stone obliterated Tivan’s collection in Guardians of the Galaxy, but apart from a brief appearance in the credits roll of 2017’s Vol. 2, there’s been no update of what she’s been up to. A throwaway line from Nebula (Karen Gillan) confirms the Guardians bought Knowhere from The Collector, so hopefully, all his exhibits have been freed. Even though she’s not confirmed as a member of the Guardians just yet, she’s clearly comfortable with them.

Because comic Cosmo was often drawn into the affairs of the Guardians, she could help usher in newcomers like Moondragon or bring back the forgotten “original” team that was teased in Vol. 2. We’re warned that Guardians of the Galaxy Vol. 3 will be the end of the current lineup, and even though that doesn’t mean we’re done with the Guardians franchise, any number of them can step aside or even perish. After Star-Lord’s comic book death, Cosmo was tasked with forming the Annihilators as the team the Guardians should’ve been. If Chris Pratt’s Star-Lord kicks the bucket, we could follow this storyline to help introduce major players like Beta Ray Bill and the Silver Surfer.

Looking at what’s next for Cosmo, two humanoid animals on the team are sure to rub Rocket the wrong way now that he’s no longer the cutest. Cosmo is seriously powerful in the comics and even took on Adam Warlock on his own. Given that Will Poulter is confirmed to play Warlock in Guardians of the Galaxy Vol. 3, it will be interesting to see whether she’s got the chops to tear a chunk out of him like she’s Old Yeller. It’s not all long walks and belly rubs, though, thanks to the inclusion of Chukwudi Iwuji’s High Evolutionary as the big bad of Vol. 3. The High Evolutionary has a penchant for experimenting on animals, which means both Cosmo and Rocket could be in trouble. In the meantime, there’s a new good girl in the MCU who has no trouble winning over fans with her wet nose and wagging tail.