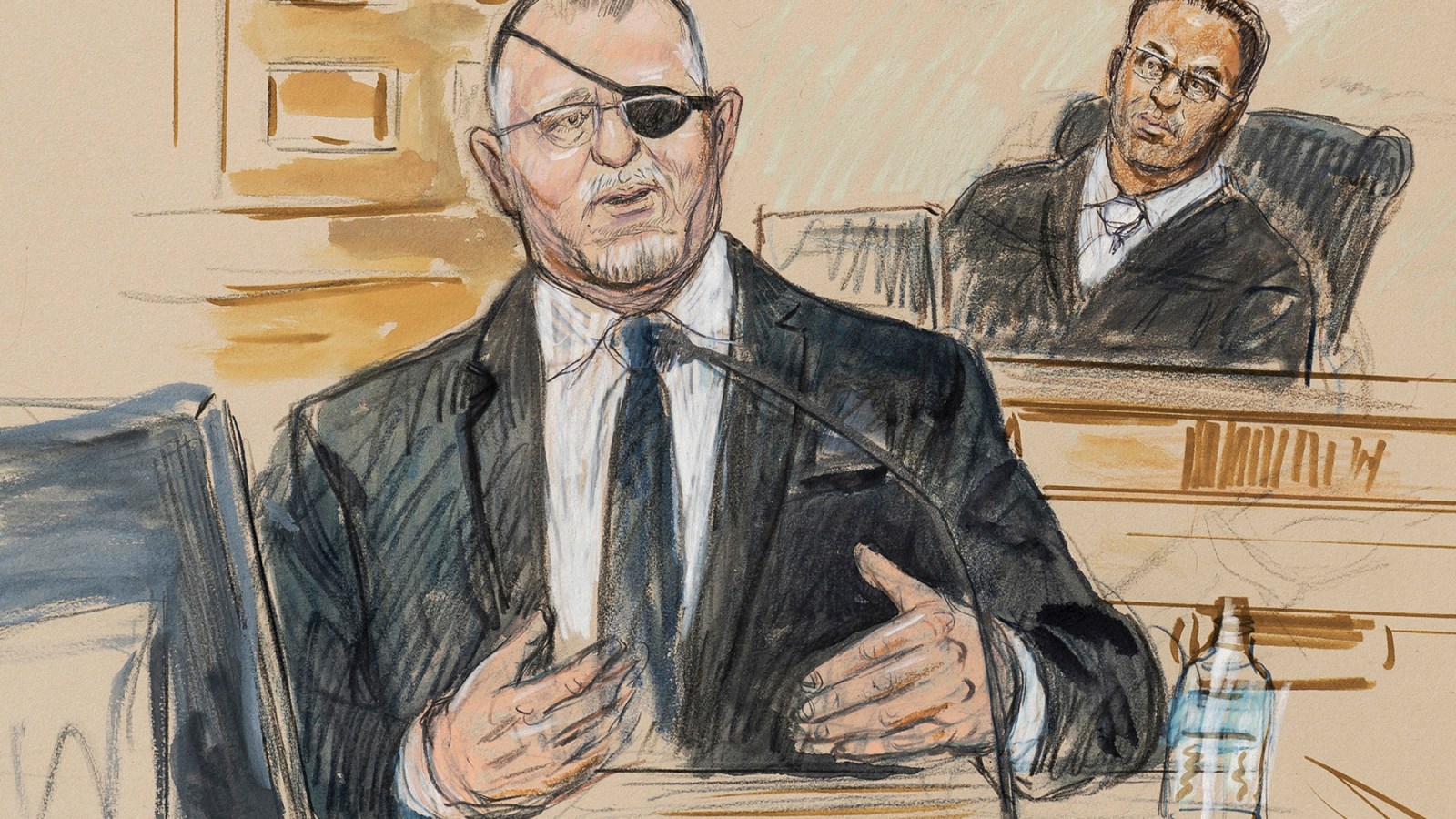 The historic verdict — the most serious yet secured in relation to the events of Jan. 6 — was nonetheless mixed. Alleged co-conspirators Jessica Watkins, Thomas Watkins, and Kenneth Harrelson were found not guilty of sedition. Meggs and Watkins were, however, found guilty of the lesser charge of conspiring to disrupt the counting of the votes of the Electoral College.All five prosecuted members of the militia group were found guilty on charges of obstructing an official proceeding. Four of the five, including Rhodes, were found guilty of “tampering with documents or proceedings and aiding and abetting.”

Throughout the trial, which opened on Oct. 4, the government alleged that Rhodes and his subordinates committed “seditious conspiracy” by working to block, by force, the peaceful transfer of power from Donald Trump to Joe Biden. The defendants also faced lesser charges that they conspired to disrupt the official proceedings of the joint session of Congress to certify the votes of the Electoral College.

Sedition is rarely prosecuted, and convictions are even rarer.

The Oath Keepers are a conspiratorial militia group that recruits heavily from former-military and law enforcement personnel. The militia began as fiercely anti-government, coping a defensive posture against fever-swamp-nightmares that federal authorities could turn entire cities into internment camps.

But the militia came to embrace Donald Trump as a hero figure and hoped and believed Trump might marshall them into battle against antifa and other perceived leftist threats. In its conspiratorial worldview, the group saw Biden’s win as a “ChiCom puppet coup” — a victory for the “deep state,” Communist China, shadowy globalists, and alleged “pedophiles” in Congress.

According to the government’s case, the Oath Keepers leadership began preparing for what Rhodes repeatedly presaged as “a bloody, bloody civil war” in the immediate aftermath of the November 2020 election. On a Nov. 9 GoToMeeting conference call, Rhodes urged his followers to accompany him to the nation’s capital: “Let’s go to D.C. together. I’ll be right there with you,” he said. “I want my bikers, I want my fucking street fighters, I want my brawlers.”

Key to the prosecution’s argument was the extensive trove of contemporaneous communications produced by the defendants, including audio recordings and text messages. In one recording, defendant Kelly Meggs can be heard saying that “pepper spray is legal. Tasers are legal. And stun guns are legal. And it doesn’t hurt to have a lead pipe with a flag on it.”

Jason Alpers, a former Oath Keeper turned prosecution’s witness, testified that Rhodes had attempted to use his connections to Trump’s inner circle to deliver a message to the President. Rhodes wrote that Trump must “do as Lincoln did,” and arrest “congressmen, state legislators,” and supreme court justices. “Take command like Washington would,” read the message, which Alpers did not deliver, “go down in history as the savior of the Republic, not a man who surrendered it.”

By the time Jan. 6 rolled around, militia members were spotted around DC acting as security for former Trump advisor Roger Stone. Various members, including Rhodes, had stockpiled caches of weapons across the river from Washington D.C. in hotels in Virginia. The weapons were under the control of a “Quick Reaction Force” that Rhodes was prepared to summon to storm the nation’s capital should Trump invoke the Insurrection Act — an act the Oath Keepers believed would give the militia the legal cover it sought to wage war on the president’s enemies. (The jurors heard evidence that Rhodes personally purchased $17,000 worth of weapons and other tactical equipment in the buildup to Jan. 6 and the weeks after).

Those weapons were not summoned, the government alleged, because the Capitol was successfully overrun without them. As the insurrection unfolded, Oath Keepers eagerly joined the fray, storming the halls of Congress in military “stack” formation. Rhodes, standing just outside, allegedly celebrated the insurrection, dismissing concerns for the dangers posed to members of the House and Senate with the profane verdict: “fuck ‘em.”

Despite Rhodes claiming on the stand that the Oath Keepers who entered the Capitol were “off mission,” jurors heard evidence that Rhodes & Co. later wished they’d brought their guns. Rhodes stated in a Jan. 10 recording that his “only regret” about his team raiding the Capitol, “is that they should have brought rifles” because that would have “fixed it right then and there” by “[hanging] f—in’ Pelosi from the lamppost.” A similar sentiment was amplified by another alleged conspirator, Thomas Caldwell, who wrote in a Facebook message the evening of Jan. 6: “If we’d had guns I guarantee we would have killed 100 politicians. They ran off and were spirited away through their underground tunnels like the rats they were.”

The government alleged that the seditious plot did not end with the violence and chaos at the Capitol — which Rhodes allegedly saw as a first victory in a larger battle. Rhodes in particular allegedly sought to instigate a violent resistance to the incoming Biden administration well into January. Rhodes, the government highlighted, is a Yale law school graduate who, though he was disbarred in 2015, still possessed a sophisticated understanding of the law and his wrongdoing.

The Oath Keepers’ defense attorneys accused the government of misinterpretation and overreach. They admitted that the rhetoric of their clients was overheated and even inappropriate. But they insisted that loose talk about overthrowing the government never coalesced into an actionable plot. The militia members, they maintained, had prepared to follow Trump’s orders, if called upon, but ultimately did not bring weapons into the city and were simply caught up in the frenzy moment when it came to invading the Halls of Congress.

Prosecutors for the federal government countered that the law regarding conspiracy did not require proof of a plan. A conspiracy exists the feds argued, when there’s an “agreement or understanding” to pursue illegal aims — in this case to block the peaceful transfer of power.

The trial stretched on seven weeks, and did not take on the circus atmosphere many had feared, even with Rhodes taking the stand in his own defense. District Judge Amit Mehta, reportedly told the courtroom at the conclusion of the trial: “If the American people are looking for an example of how our institutions work, how our democracy works, how our criminal justice system operates, we have no better example than this case.”

Outcome aside, the Oath Keepers prosecution marked a historic attempt by the Department of Justice to seek accountability for violent opposition of the government. The track record of such prosecutions is poor; but for history it lays down a marker of infamy. As Rachel Maddow put it in a recent interview with Rolling Stone about her new podcast about a similar (if unsuccessful) trial from the 1940s: “Sedition charges are really hard to prove — even in the worst cases.”

Coronavirus: L.A. County reported 2,946 more cases and 56 more deaths, Jan 31
MyPillow’s Mike Lindell Does Bizarre Kimmel Interview From Inside Claw Machine
US shoots down Chinese ‘spy balloon’ off Carolina coast
Crank Up the Propane: ‘King of the Hill’ Is Back
A Mystery Lemon Might Be TikTok’s Next Great Gossip Account