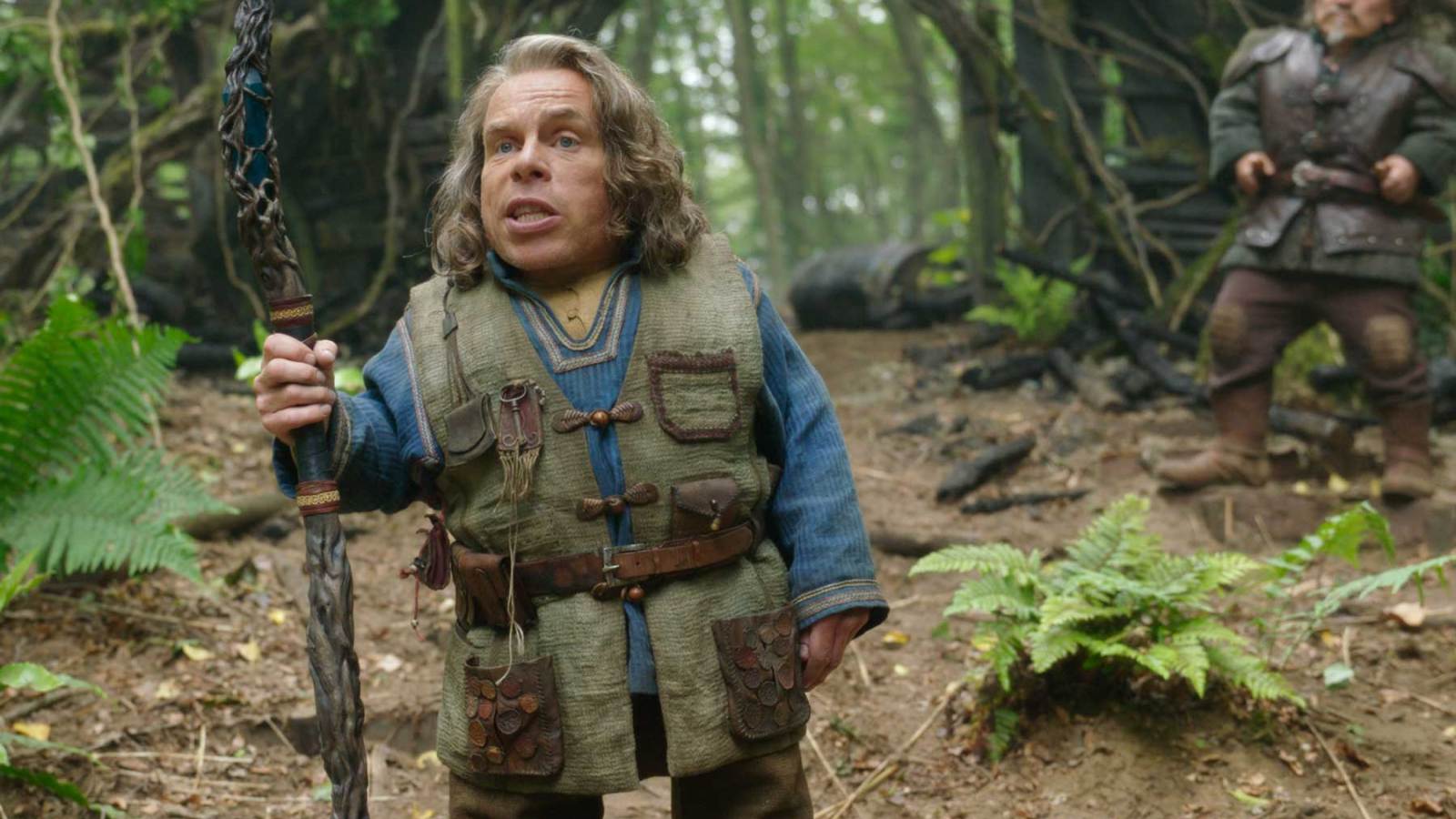 One of the main characters on the great FX comedy Reservation Dogs is named Elora Danan, after the baby from the Eighties fantasy film Willow. It’s a running gag that everyone on the reservation has not only heard of the movie, but has strong opinions about it. Back in 1988, Willow — in which aspiring sorcerer Willow (Warwick Davis) and mercenary Madmartigan (Val Kilmer) have to protect Elora Danan after a prophecy declares she will bring about the end of an evil queen’s reign — was a modest box office success. It’s largely been forgotten, though, a footnote in the careers of director Ron Howard, producer George Lucas, Kilmer, and nearly everyone else involved other than Davis, since it was his one big shot as a leading man. (Previously, he was best known, if unrecognizable under the costume, for playing Wicket the Ewok in Return of the Jedi.) That it left such an impression on the friends and family of this other Elora Danan is treated as another sign of how odd life can be on the reservation.

But Willow obviously made an impression on others, including Jon Kasdan. The son of frequent George Lucas collaborator Lawrence Kasdan, Jon has spearheaded a Disney+ Willow sequel series, set decades after the events of the movie, with a mix of new and returning characters.

In the Age of IP, when no title is too obscure to be adapted or revisited, a Willow TV show doesn’t feel quite that strange in theory. Heck, at this rate, we might eventually get a remake of the Lucas-produced flop Radioland Murders. But the actuality of this Willow feels very odd indeed, as a show that can’t decide exactly what it wants to be, nor who its intended audience is.

I have not seen the movie since around the time it was released on home video. Prior to the show’s announcement, I hadn’t even thought of it since Davis spoofed himself as the star of the 2011 Ricky Gervais-Stephen Merchant mockumentary series Life’s Too Short. I remember mostly enjoying the film way back when, particularly for Kilmer leaning on his underrated comic chops as the simultaneously badass and ridiculous Madmartigan, but little beyond that. So I went into the series wondering if it would be comprehensible at all.

Plot-wise, Kasdan and company make sure that all the Willow newbies and casuals will be able to follow along. The show is set decades after the events of the film, and life has been peaceful for all that time. Madmartigan has gone missing, but his wife Sorsha (Joanne Whalley) now rules the kingdom, and their children Kit (Ruby Cruz) and Airk (Dempsey Bryk) are young adults who get caught up in an adventure involving Willow, the return of evil magic, and a search for the long-absent Elora Danan. There is a lot of exposition at the start of the premiere, and Willow and other characters periodically stop the action to remind us what happened in the movie, and what important events have taken place in between. There’s a quest, an evil queen, various monsters and challenges, yada yada. You know the drill.

Where this new Willow stumbles isn’t in its ability to explain what’s happening, but its ability to explain to anyone beyond the devoted why this world is worth revisiting. It doesn’t outright demand that you have preexisting affection for Willow, Sorsha, or Madmartigan, but the show would certainly appreciate it. There’s a midsized castle’s worth of conversation and debate about decisions from the movie, and the later events caused by those decisions. But the show rarely manages to put emotional weight onto all that history, and most of that comes from the quiet force of Warwick Davis’ performance.

Even the show seems to occasionally recognize that it has too much backstory. In one sequence, Willow (now a powerful sorcerer) attempts to explain how magic works to Airk’s kitchen maid girlfriend Dove (Ellie Bamber). “Magic is the bloodstream of the universe,” he begins. “Forget all you know, or think you know.” She interrupts to say, “Oh, I don’t know anything. So we can probably just skip that.”

That exchange typifies the other major issue: Kasdan and his collaborators can’t decide on a tone. In some moments, it is a straightforward swords-and-sorcery epic, with grave danger, heroic sacrifices, and an unmistakable sincerity. In others, it is a jokey lark where many of the characters speak in a contemporary vernacular — “Ugh, you’re such a dad!” Dove tells Willow at one point — and seem aware of the conventions of the kind of story they’re in. It is not impossible for the two modes to peacefully co-exist, even in such a larger-than-life setting, but it’s incredibly hard. More often than not, these opposing stylistic approaches keep working against each other. The big emotional moments feel hollow because everything has been presented as a meta gag for too long, while the quips and modern songs (a cover of “Enter Sandman,” for instance, plays when our heroes arrive at a scary destination) feel strange when everyone has just been crying or dangling from a cliff only moments earlier.

The frustrating part is that buried underneath all the irony and references to the film are appealing characters and the bones of an entertaining yarn. Willow, Kit, and Dove wind up traveling with Graydon (Tony Revolori), a bookish prince who is betrothed to Kit but clearly prefers Dove; Jade (Erin Kellyman), a knight-in-training who is Kit’s best friend and obviously would like to be more than that; and Boorman (Amar Chadha-Patel), a thief and master swordsman whose constant self-aggrandizement is meant to fill some of the comic void left by Madmartigan(*). It’s a solid group that works well in various combinations. And when the show stops winking and plays things relatively straight — which happens much more in the sixth and seventh episodes than in the earlier ones given to critics — the dramatic beats can land effectively.

(*) Val Kilmer’s ongoing health issues, the result of a throat cancer diagnosis, have made acting a challenge for him, except in roles, like in Top Gun: Maverick, designed to incorporate his difficulty speaking.

The action sequences are lively, and the production design fairly eye catching, with each episode largely taking place in some new visually interesting locale, like a decaying haunted palace, or an endless barren sea that’s only an inch or so deep. It’s entertaining in bursts, but uneven overall. In one scene, Boorman struggles to find an audience for another of his stories, and gripes, “Your generation has, like, zero attention span for epic tales.” At times, Willow feels like an epic tale made by people who keep getting too distracted to settle on exactly what show they’re making.

But maybe the Willow obsessives — on the reservation or off — will love it?