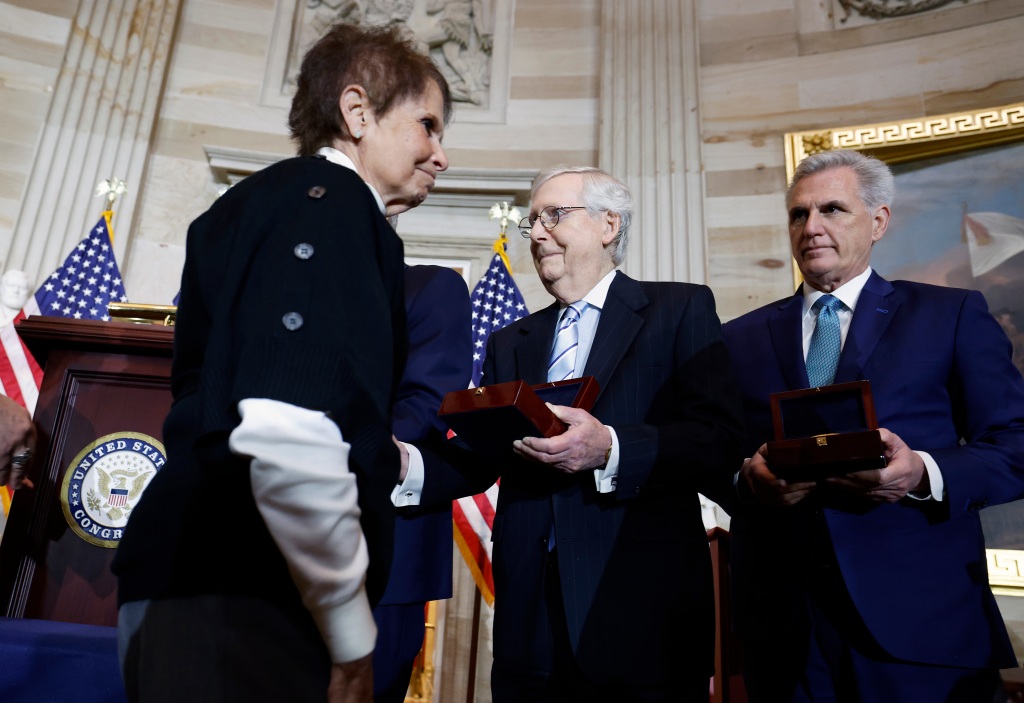 Police officers and family members declined to shake the hands of Senate Minority Leader Mitch McConnell (R-KY) and House Minority Leader Kevin McCarthy (R-CA) during a Congressional Gold Medal ceremony on Tuesday to honor those who defended the Capitol amid the January 6th attack.

Video of the ceremony showed recipients shaking hands with Senate Majority Leader Chuck Schumer (D-NY) but not McConnell and McCarthy.

The event was carried by CNN and MSNBC, and Fox News joined in later.

Ken Sicknick, the brother of Capitol Police officer Brian Sicknick, who died after the attack, told CBS News that he did not shake hands because “they came out right away and condemned what happened on January 6th, and whatever hold that [Donald] Trump has on them is backstepped, is danced. They won’t admit to wrongdoing, not necessarily them themselves, but of Trump, of the rioters. People like Louie Gohmert, who presented an American flag that was flown over the Capitol to a January 6th rioter and told them they were a patriot, it’s disgusting. It takes away everything my brother has done.” Gohmert, a Republican from Texas, has been critical of the federal prosecutions of those involved in the Capitol siege.

At the ceremony, McConnell said, “Thank you for saving our country. Thank you for being not just our friends, but our heroes.”

McConnell condemned Trump’s role in fomenting the siege on the Capitol, but he ultimately voted against convicting him on impeachment charges.

McCarthy said that “these brave men and women in uniform stood strong in the line of duty for our county, and we’re forever grateful for that.”

In the immediate aftermath of the attack, McCarthy said that Trump “bears responsibility” for what happened, but weeks later he trekked to Mar-a-Lago to reestablish the former president’s backing. McCarthy also declined to support impeachment against Trump.

Just before the ceremony, Rep. Bennie Thompson (D-GA), the chairman of the January 6th Committee, told reporters that they will make criminal referrals to the Justice Department based on its investigation, but no announcement has been made as to who that will be.

George Santos Claims He Produced ‘Spider-Man’ Musical, Allegedly Another Lie
Here are the Best LGBTQ YA and Kids’ Books of 2022, According to ALA’s Rainbow Round Table
Things to do in the San Fernando Valley, LA area, Feb. 2-9
QNAP Fixes Critical Vulnerability in NAS Devices with Latest Security Updates
New High-Severity Vulnerabilities Discovered in Cisco IOx and F5 BIG-IP Products