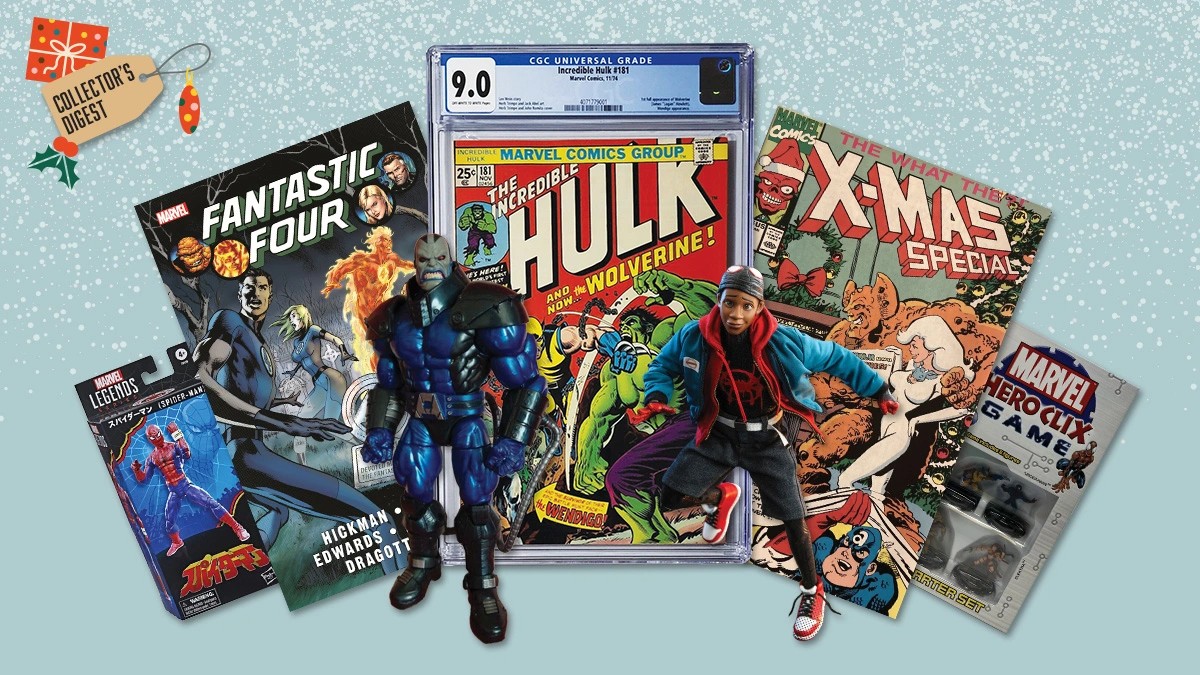 This article is presented by:

The holidays are here! With the collectibles market on fire lately, it’s been a tough time for people to get their hands on some of the coolest comics, games, cards, and action figures out there. But there’s no better time to go big than the holidays: now is a great time to grab those giant action figures, throwback video games, massive collected editions, and classic cards. And of course, we’re happy to help you find the perfect Marvel gift for the nerds in your life, whether they’re lifelong fans or just getting into your favorite heroes.

What The–?! was a parody book published in the late 1980s and early 1990s by Marvel to make fun of their staff, their stories, and their readers. And, for one half of one issue, they actually pulled off a touching Christmas story. It starts with Santa Claus being caught in a massive bear trap atop Doomstadt and then becomes something funny and nice as Doctor Doom has to take Santa’s place on Christmas Eve. This issue is surprisingly not available on Marvel Unlimited, so the only way you can read it is in print, which might account for a few of those $20 prices you’ll find the book for. If you hunt, you can get it for around cover price.

Jonathan Hickman is one of the most influential Marvel creators of the past 15 years. He revolutionized the X-Men and destroyed the multiverse with the Avengers, but his first (and arguably best) franchise work was on Marvel’s First Family. He wrote a Fantastic Four full of love, heart, and hope, and it was one of the greatest runs on any Marvel comic ever. It’s also a nightmare to read in trade: towards the end, he would run stories back and forth between issues of Fantastic Four and FF, and Marvel mostly collected them as separate series. These omnibuses are the best, easiest, most coherent way to read the full run and are a steal at $150 for both.

The best Spider-Man cartoon recently hit the streaming service, and the lesson you should be taking from how long it took for Spectacular Spider-Man to hit streaming is that you can only trust your physical media if you want permanent access to your favorite shows. This one was really well animated, well acted, and written by people who genuinely loved the source material. It’s beloved for a reason. It’s also very affordable: the full series can be bought for about $35.

There is an itch that hits everyone who gets a Marvel Legends action figure, and that itch is to finish getting the rest of the massive build-a-figure for that set. Well, I have good news for you and your Elfster recipient: you can just buy the finished product. And one of the best ones is 2018’s Apocalypse. The character has undergone a serious change since this figure came out—he’s no longer the blood-soaked tyrant of the ‘90s comics and is now a hardcore Wife Guy vacationing with his family in a parallel dimension full of demons—but he still looks cool as hell, and this figure is giant. And for about $50, it’s way cheaper than buying the six figures that come with the set.

Heroclix is a cross between a pen-and-paper tabletop role-playing game and a Warhammer-esque tabletop figure brawler, and while that sounds complicated, playing it is relatively straightforward and a lot of fun. A big part of that fun is being able to, for lack of a better term, smash all your toys into each other. A starter set makes it super easy to do that with your family: grab some for as cheap as $12, and you can set up several hours of adventure with the kids.

This holiday issue was comprised of a bookend story, and a bunch of one page shorts by celebs and some top comics talent. Like any anthology book, there are hits and misses, but the hits are home runs: a story from Leah Williams and Marcio Takara with a charming Braddock family reunion; Vita Ayala and Pere Perez taking Gabby Kinney through her Secret Santa process; a Rainbow Rowell and Kris Anka story that marks the last time in continuity that Beast was sympathetic; and the best one, a one page bit from Chip Zdarsky cracking on an old, inexplicable panel from a ‘70s annual. This is hilarious and kind, and still pretty cheap at under $7.50.

We all know and love Marvel’s ol’ Canucklehead, Wolverine. His first appearance as a Hulk villain is one of the most sought-after comics of the Silver Age, and with good reason – Herb Trimpe’s costume design for Wolverine is immaculate and iconic, and Len Wein was a genius to carry him over to Giant-Sized X-Men when he didn’t land perfectly in the Hulk world.  But if you’re interested in this issue, be prepared to shell out a small fortune: highly graded copies of this issue are going to run you upwards of $7,500. More damaged copies are much cheaper, but still well over $3,500.

Real heads know, and real heads probably don’t have $600 to spend on a ¾ sized arcade cabinet. So instead, go buy a Dreamcast and a copy of the greatest fighting game of all time for under $200, get a case of Jolt, and relive the glory days of 1999. Trust me.