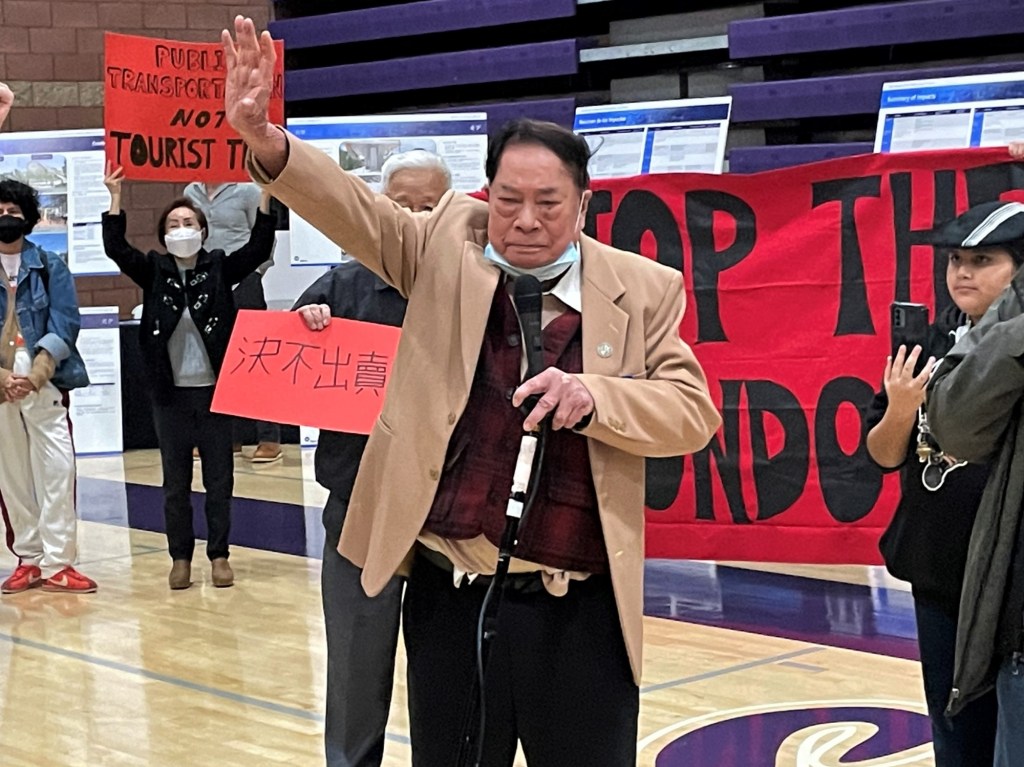 About 150 people took over an official Jan. 12 meeting set up by LA Metro officials, chanting slogans, marching and hoisting signs to protest a proposed aerial tram project over Chinatown that would link Los Angeles Union Station and Dodger Stadium.

The unusual demonstration took place Thursday night in the Cathedral High School gym in Chinatown during a meeting set up by LA Metro officials which featured an array of poster boards on easels with text and renderings of the so-called gondola project’s components. The images and text depicted towers that would hold the cables and gondolas, and three proposed gondola stations: one at Union Station off Alameda Street, one at Chinatown at the entrance to the Los Angeles State Historic Park and one at the stadium atop Chavez Ravine.

But after about an hour, when the crowd realized the meeting did not include a presentation and there would be no chance to express their opposition publicly — only privately, to a stenographer — they used their megaphones to make speeches and then they marched in a wide circle in the gymnasium.

Chanting “Stop the gondola!” and “Hey hey, ho ho, the gondola has got to go!” members of the Stop The Gondola group, made up of residents of Chinatown, Solano Canyon and Lincoln Heights, loudly voiced opposition. At the end of the meeting time, some knocked down the poster boards and were escorted out of the building.

“It is great to see people show up and speak out,” said Phyllis Ling, organizer of the group, as she gave a speech inside the gym — delivered through a megaphone.

She said it was the first time the group spoke out in unison in a public forum.

“This project is not for us,” Ling said. “It makes no sense for public transit.”

This group and other neighbors characterize the proposed $300 million project as a gift to billionaire Frank McCourt, the former owner of the Los Angeles Dodgers who, through McCourt Global, owns 50% of the parking lots at Dodger Stadium — including the land proposed for the main gondola station at the stadium.

The project was fast-tracked and given a sole-source contract without requiring the project to go out for a public bid.

A recent court ruling approved the unusual process, saying the project’s innovative gondola tram allowed for the no-bid track. The judge also agreed with LA Metro that the project would reduce traffic congestion during Dodger games and concerts.

ARTT is in the process of transferring ownership to Climate Resolve, an L.A.-based nonprofit that in turn created Zero Emission Technologies (ZET), which will be the new owners and eventual operators of the gondola project should it be approved and built, according to Nathan Click, a Climate Resolve spokesman.

According to ARTT,  the gondolas would take 5,000 passengers per hour on a sky-high, Disneyland-esque, 1.2 mile-ride that would last 7 minutes. Click claimed that its 5,000 riders per hour would account for 20% to 25% of people attending any Dodger Stadium event, thus reducing traffic congestion, pollutants and greenhouse gas emissions especially during game days. LA Metro’s website says the project would operate daily to serve residents, workers, LA Historic Park users and visitors to L.A.

“If it is able to cut down on traffic and the kinds of emissions that come with that, it is worth supporting,” said Brother John Montgomery, principal of Cathedral High School. He said the school is in support of the project.

But opponents argue the project is unnecessary. They want LA Metro to provide dedicated bus lanes for the existing Dodger Express, which is a shuttle service from Union Station to Dodger Stadium run by LA Metro. Some want to see an escalator or people mover from the Metro rail L Line (Gold) Chinatown Station to the stadium.

Ling pointed out that McCourt has indicated in the past that he is interested in building developments on the parking lots. Court records show he was at one time considering retail, hotels and possibly housing. Some call it a kind of LA Live complex.

“Frank McCourt wants to build a giant complex on the parking lot. It is not a secret,” Ling said, adding that the gondola would serve a private development, not the community at large.

Others who spoke against the project Thursday night said the Chinatown community would rather see money invested in a full-fledged grocery store and a hospital. Both have closed within the past five years, said Katie Wang, with the Chinatown Community for Equitable Development.

Barbara Hensleigh, chair of the Sierra Club Angeles Chapter’s Central Group, encompassing the area of West Hollywood through East Los Angeles, from Griffith Park through South Los Angeles, said the group is against the gondola project.

She said the gondola towers, as tall as 13 stories, would be a blight on the landscape. She also said the project doesn’t fit the definition of a public transit project. “Also, the community doesn’t support it,” she added.

A recent study by UCLA’s Mobility Lab challenges the claims by proponents that the project would dramatically cut Dodger Stadium traffic, and the study puts the gondola rider projections far lower than McCourt’s. The UCLA lab said the data is preliminary and more studies are needed.

John Christensen, a professor at UCLA’s Institute of Environment and Sustainability said in a recent interview that, at most, about 8% of those attending events at Dodger Stadium would take the gondola, and just 2% would ride it back down.

All comments on the Draft Environmental Impact Report must be received no later than 5 p.m. on Tuesday, Jan. 17, 2023.