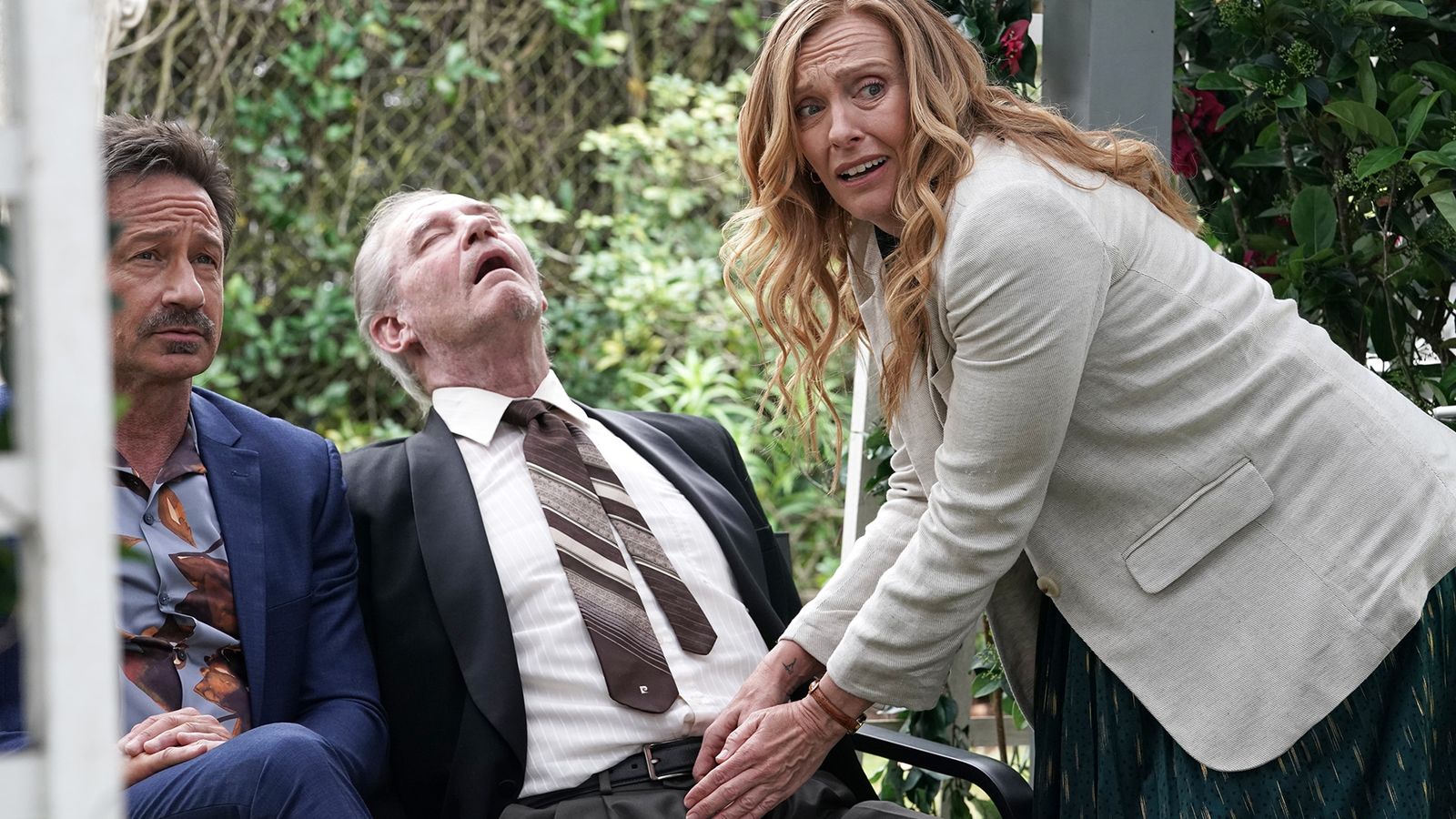 Is there still a space on screens for films that make light of incredibly serious topics, just for a laugh?

Well, the cast of a new Sky film seem to think so.

There are referrals to depictions of sexual assault further into this article.

The Estate is a comedy caper, which sees a warring family, most of whom hate each other, try to win the vast inheritance of their dying relative – through any means possible.

In the film, one part sees our leading cast attempt to get an old man to sexually assault their teenage relative by flashing her, in an effort to stop him marrying their aunt and claiming her inheritance, while another scene features one of the cousins force their husband to sleep with her wealthy family member, to try and, let’s say, cheer her up.

Duchovny, who plays Richard (or Dick, as he constantly refers to himself as while trying to sleep with his on-screen cousin – seriously) told Backstage, the TV and film podcast from Sky News, that not every film has to have a political message, or censor itself.

“I think it’s nice to play a little fast and loose with things that people maybe sometimes take too seriously for good reason,” he explains.

“It’s not trying to get people to not take serious issues seriously, but it is for that two hours or whatever, it is not taking those things seriously.

“It’s not a position paper on how one should live one’s life.”

He adds: “I think the problem is these days, every movie is treated like it’s a position paper.

“It’s never been the case for me… If a movie has good politics, it doesn’t make it a good movie – it just makes it a movie with good politics.

“So this is a good movie with bad politics, let’s say.”

Faris adds she has been “part of a lot of offensive things”, perhaps referring to projects like Scary Movie and The Dictator (though offence is often a subjective idea…)

“I’m like numb. I can’t even gauge anything any more. That’s why you can’t offend me.”

“If something’s funny, it’s going to appeal to you.”

After apologising to Faris for her take on the difference between US and UK comedy (she thinks American comedies are sometimes too forced), she says about The Estate’s vulgarity: “It’s naturally bubbling up out of these circumstances that the characters are going through.”

In fact, the comedy is one of the key reasons why the cast decided to take on the project, with Duchovny telling Backstage: “I thought it was pretty profane and funny and just kind of reminded me of comedies from 10 or 15 years ago that I was missing.”

Rosemarie DeWitt agreed, saying: “It was profane and you (David) made it more so, which is amazing that you were able to do that… it was a no-brainer – and it was funny on the page, which is always a really good start.”

DeWitt also revealed that her co-star Collette was also her agent – another very obvious draw to her doing the film.

Regaling their time on set, Faris told Backstage it was one of her favourite filming experiences, because “we were laughing all the time”.

“We were playing in a way that I wasn’t able to on Mom (the long-running show that she starred in) and… it just felt so good.”

“So just really enjoying it. To enjoy something that much is important, I think, in life in general.”

The Estate is now available on Sky Cinema and NOW – hear our review in this week’s Backstage podcast.