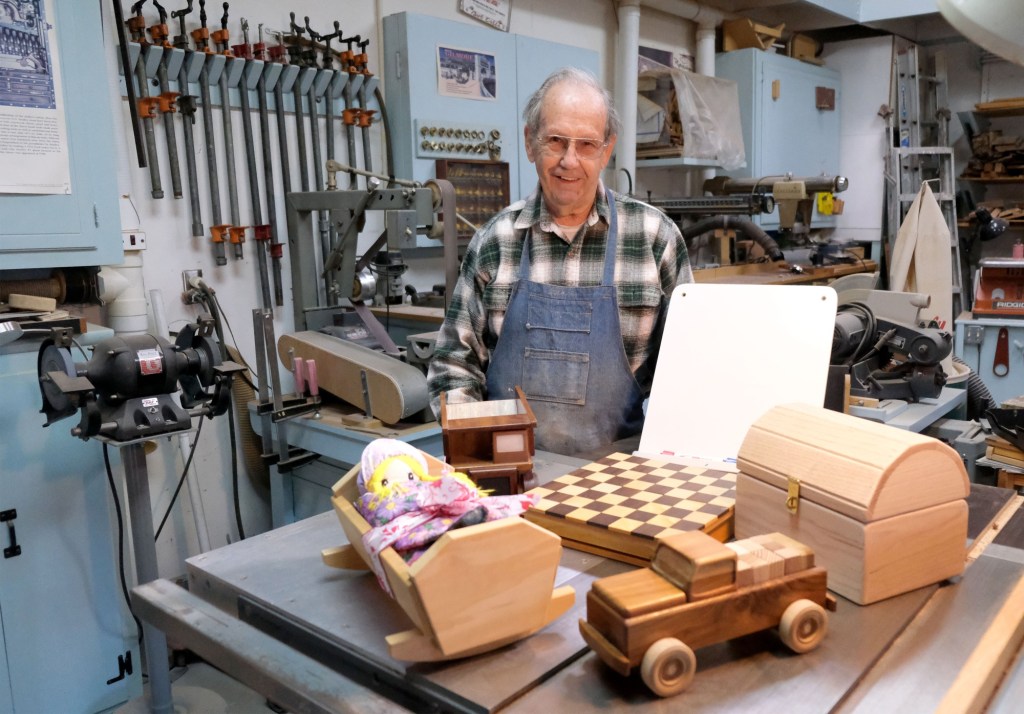 The gifts are small, but the impact they make is powerful.

For kids living in foster care group homes, the handmade wooden treasure chests that come with lock and key are popular because nobody can mess with what little stuff they call their own.

The baby cradles lined with a 24×24-inch quilt, and a hand-sewn doll in each one, are a big hit with little girls in families where living at the poverty line is a step up in their lives.

And the wooden white boards to write on and erase bad memories are a great gift for kids living with their moms in battered women’s shelters, hiding from abusive fathers.

For them and many of their wives, Christmas starts early every year.

“We know the toys we make will be going to hundreds of special children, so we work really hard to make them special, too,” said 78-year-old Jim Kelly, head of the toy committee.

In March or April, after the rains are gone and the wood is dry, they start gearing up for the holidays. Kelly — who spent 20 years in the Navy, 20 years working for the Metropolitan Water District, and 20 more as a high school math teacher — picks up the wood from Swanner Lumber in Burbank and Anderson Plywood in Culver City.

It’s thousands of dollars worth of wood, given free to the woodworkers because both companies know where their wood is going and why. Count them in, they told Kelly. “We couldn’t do this without them,” he said.

After they pick up the wood, Kelly and the members of his committee start making the rounds. They’ll drop off enough wood for 90-year-old Jack Robbins and his crew to make 200 intricate white boards in his wood shop behind his home in Winnetka.

Jack’s a sharp, humble guy who has been a member of the woodworkers for 15 years, ever since retiring as an “auto mechanic,” he said. Only later would I learn from another member that Jack was chief mechanic for Lamborghini USA, and worked exclusively on high-performance cars, like Rolls Royce.

“We spend all summer making the individual parts, which gives us the time to do it right and make sure everything fits,” he said. “We also make checker boards, piggy banks, cars, a whole bunch of different toys. I’m 90 and still milling away.”

Across town, Jeff Bremer, 70, and his crew get more wood to make treasure chests. He’s been in the woodworkers since 2010 before retiring as a controller for pension companies.

“Woodworking is a solitary hobby so getting together with all the guys to make toys for these kids is the best part,” he said. “We’ve got some amazing, talented people, like Jack, making these toys.”

Amazing talent also from Jack’s wife, Lorene, and the San Fernando Valley Quilt Association, and Valley Quilt Guild, who make the cradle liners and hundreds of quilts throughout the year for children in hospitals.

In early August, Sheila Rosenthal starts making the calls to the dozen or so charities the woodworkers support to see what their needs are for the year. She’ll call Catholic Charities of Los Angeles, the Pacoima Early Education Center, and five child care centers, among other charities.

“We were so worried when the pandemic hit we weren’t going to have any toys for the kids,” Sheila said. “It turned out to be the opposite. We made more toys than ever. The downside is we lost members because of COVID, and it’s been hard getting new people involved.”

Maybe if they knew what Swanner Lumber and Anderson Plywood knew. Where their wood was going.

The same place a new member’s time would be going. To making small gifts with a powerful impact, and bringing smiles to our most vulnerable children next Christmas.

For more information on the woodworkers, go to sfvw.org