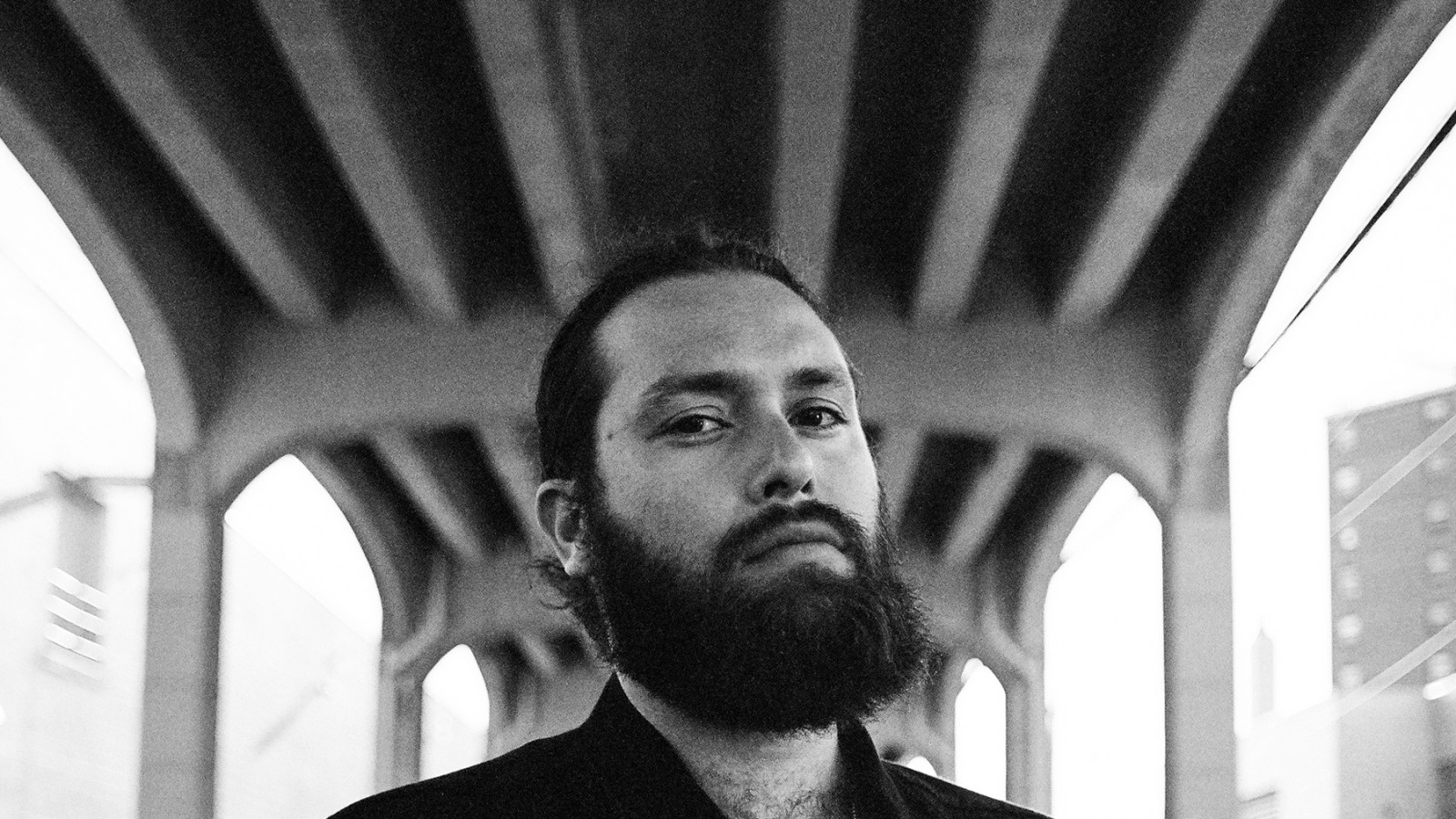 Nick Hakim seems to inherently understand the value of silence, of sparseness. The child of a Peruvian father and Chilean mother, Hakim was born in Washington D.C. and now resides in a quiet pocket of the Ridgewood neighborhood in Queens, New York, along the Brooklyn border. When we catch up over Zoom recently, he’s calm and composed, occasionally plinking his piano as he speaks. Near the end of our interview, the conversation veers toward legendary experimental composer John Cage. Hakim goes to his bookshelf, and shows me his copy of Silence, a collection of essays Cage wrote between the Thirties and Sixties.

But his disposition changes whenever he starts talking about creating or playing to a crowd, whether that’s at a giant festival or a small, intimate room. His voice almost trembles as he gets lost thinking about the experience of making, something he’s been doing since his impressive 2017 debut Green Twins. Last October, he released his third solo album Cometa, an ambitious project that draws inspiration from musical greats like Stevie Wonder, Iggy Pop, and David Bowie. The experimental influences of each artist can be heard throughout the record, notably on the roiling bass, eclectic guitar, and hushed speak-singing of “Feeling Myself.” Elsewhere, tracks like “Vertigo” flirt with trap-esque drums fused with romantic guitars. “Perfume,” meanwhile, is a hushed ode to a lover’s leftover scent, each line delivered with Hakim’s quick-paced falsetto.

Following an album release show played close to home at the Ridgewood venue TV Eye, Cometa has taken Hakim to places like London, Paris, and Acapulco’s Tropico Fest. “Those were a big learning experience for me in an incredible way,” Hakim tells Rolling Stone. “I really like playing by myself, and I really  like playing small, small venues.” This year, he’ll keep going with a tour across the U.S. and Canada, and then he’ll return to Europe for a run of March dates before heading to Latin America. “I’m going back down to Chile and Peru after the European dates that we do this year. I’m probably just going with my guitar and maybe I’ll do a solo show or something down there, but I’m mainly going to go see a lot of my family that I haven’t seen since 2008 or so,” he says.

Ahead of the new dates, Hakim spoke to Rolling Stone about making Cometa (and a sister album that’s on its way) and shared what he’s looking forward to now that his music is moving through the universe.

I was at the TV Eye show, which I now see was the first show of this tour. I was near the back, but the energy was palpable. How were you feeling that first night of the record’s release?
It was nice to be close to home. It was an interesting show because it was the first time that specific band and I had played together as a group. I’ve been trying out new ensembles of musicians, so it was interesting to play that music with them. It was like we all kind of learned it for the first time. Especially after lockdown and not playing for a while, it’s been quite an adjustment getting back into the groove. With an ensemble of musicians, I think the first times it can be rough, but as we’re really starting to settle into it, how we approach each thing, there’s the parts that we try to honor or commit to learn, and we play around within them. For the past however many years,  I usually just play guitar and sing. This is my first time doing shows where I’m mainly playing keyboard, and that’s been a fun kind adjustment for me. I play a lot of piano at home, so I’m always kind of practicing. I feel like I practice piano more than I practice guitar, but  I’m always exploring. The goal for me is to just keep figuring out how it can become like you, when [the instrument] really feels like you’re not thinking, when it’s a part of your body, you know? Those moments of playing where it’s like “oh, this is natural.”

How did the rest of the release shows go in California, London, and Mexico?
L.A. was probably one of the best shows we’ve played in a long time as a group. London was amazing, and it was solo. Last week, I actually played two shows in Spain throughout Galicia. Mexico was great; my mother is from Chile and my father’s from Lima, so I’m actually trying to go down to South America. I was in Brazil in August, working on my friend Arto Lindsay’s record.

This is our first headline tour in a little while, since before the pandemic. I’m most excited about going on the road with people who will all be playing on each other’s set. So the openers for the U.S. dates are this incredible artist June McDoom and her band mates Evan Wright and Sergio Tabanico, who’s a Mexican-American saxophone player. They all play in June McDoom’s band, and I’m going to be singing with them on the tour. They’re going to be a part of my set towards the end. I’m just really excited about touring with musicians that can all kind of share space with each other. I feel like we’re just going to get so fucking good by the end. I just really love their music, and I’m excited to go on the road and build a musical dynamic and a bond with them, which I  already feel really heavy with them.

Cometa’s been out since October — how are you feeling about the record now that it’s been out for a little bit?
I’m so happy that it’s out there. I feel really positive about it, and I just want to keep going and growing, keep building my life. I’m just going to keep writing. This album is a little timepiece. It really reminds me of lockdown, and it was really what kept me kind of positive during that time. Having these songs made me feel really nice, and I still feel that way. I’m excited to keep playing them.

Would you call this a lockdown record?
It really is. I felt like… what else could we do except get busy? There was a long period of time, like the first chunk of it, which was rough. I didn’t do anything. I put out my second album [Will This Make Me Good] on May 15, 2020. I’m glad I did it, but I was not in a really good headspace. It just was so weird for anyone that was releasing music and for everyone in general. It was tragic and it was sad and it was confusing, but when I put that record out, I had like maybe like a month and a half where I didn’t do anything. I was just not taking care of myself. I had some people that were really inspiring, friends who would call like, “Oh, I’m working out every day, eating healthy…”

I heard about those people, but it’s like… “What do you mean you’re not crying on your couch?”
Literally! I felt so defeated. I didn’t feel good. After my second album, I felt like making anything would be making it about me or something. I just felt so many things. I think that’s the reason I didn’t put [Cometa] out until now. I knew that the topic of the record and the subject matter was made with just me in a room. I made that record without any outside perspective. It was  a reflection of how I was feeling, and I think I was really trying to communicate positive things and talk about things that I care about. After that long phase of not doing anything at all, I kind of got my shit together, and I started organizing and composing. I put together maybe like 40 demos or something…I basically have been working on two records this whole time. I’m finishing up the other one right now.

So is the next one a sister record to Cometa?
They’re so different. I’m not trying to rush anything, either. I’ve never really made a record where I was rushed to get something out there. I feel like there’s artists that I love so much who are like that. Frank [Ocean] has like three albums, D’Angelo too, My Bloody Valentine has like two. Of course, then you have people like Prince, Stevie Wonder, and Marvin Gaye who kept making stuff all the time and putting it out. I’m so inspired by these people, although not at all trying to compare myself to them. I know my work, I know my capability, and I feel like I’m thinking of what my threshold is of pushing myself into a new kind of space. I became completely obsessed with finishing [Cometa], and it was really hard, because those songs are so special to me.

You sound like you crafted this with such care. What stands out to you on that album?
I think “Happen” was one of those times where I just was not thinking about anything besides, like the guitar and the melody and some of the words that came to me and like, and it’s so simple. It’s such a simple song; my intention was really pure, I think.

I remember when I wrote it, I woke up at, like five in the morning, completely shaking. I have a lot of trouble sleeping sometimes, and sometimes I wake up and I’ll have to find something that calms me down. I just started playing it, and then I went into the studio later that day and I tracked the guitar and had my friend track some drums. When you get so deep into a certain thing, it’s impossible for you to deny the path that it needs to go on. The path can be chaotic — for me, it can feel really chaotic. It’s abstract to me, how I come to these conclusions. I’m a student, and I want to keep learning and getting better on piano and guitar. I want to keep being aware of how my voice is growing and how to adapt to it through different stages in my life.