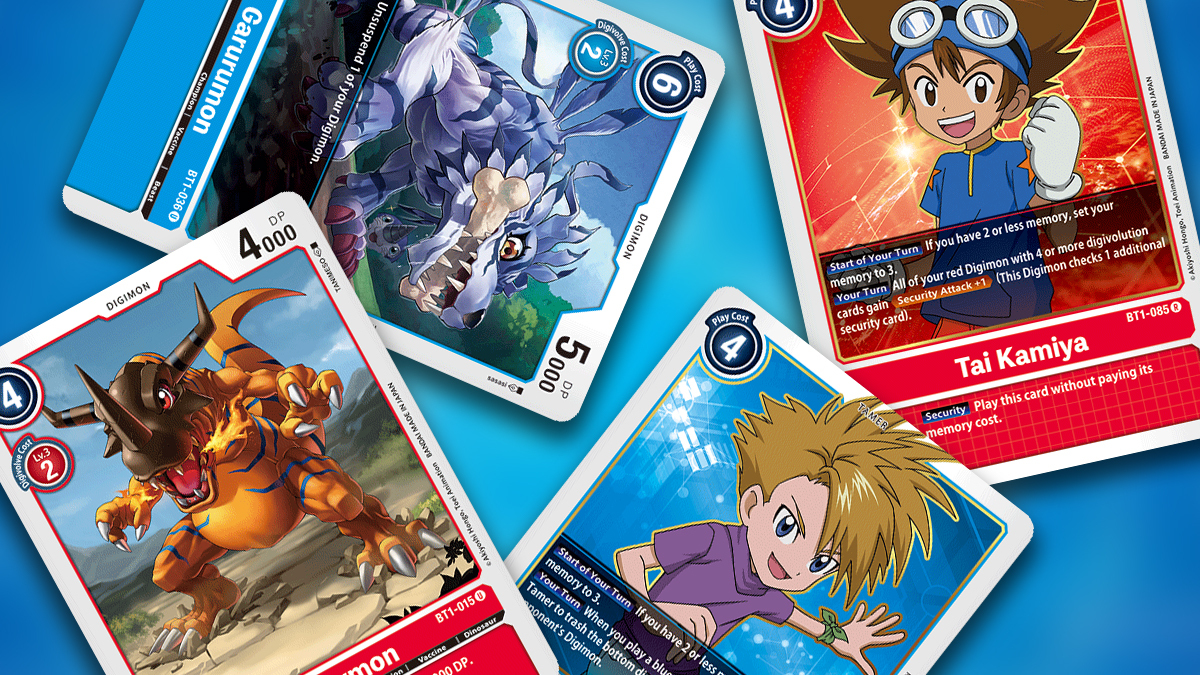 The end of 2020 marked the English-language release of Digimon Card Game, the new trading card game based on the eponymous digital monsters. Like the previous iterations, and the anime they all draw from, Digimon Card Game is about digivolving your favorite creatures in order to eventually overwhelm your opponent. Whether it’s summoning from your hand, or growing them from digi-eggs as hatchlings, Digimon involves always being on the offensive to achieve victory.

A standard game plays out between two players, each having five life points, represented by “security cards,” and the winner is the player who removes the other’s life and deals a killing blow. Moves are determined by a ten point gauge—at the beginning of each round, you have ten points you can spend on any of your possible moves. However, this meter is shared on the field between both players, and if anything you do exceeds that ten point limit, and you encroach on your opponent’s side of the counter, you forfeit the rest of your turn.

This is a game of strategy and attrition, and it’s always important to play within your means in hopes of tripping up the opposing side. Thanks to the pre-release of the starter set, not only do we have three starter decks, but there’s already a small market for pre-made custom decks, too, so you have some options for starting your digi-collection. Here’s the best of what’s available so you can conquer the Digital World.

Three pre-packaged decks are available as part of the first drop of cards, Heaven’s Yellow, Cocytus Blue, and Gaia Red, focused on Angemon, Gururumon and Greymon from the show, respectively. As you would expect, each offers a slightly different way to learn the ropes, and it’s the yellow one that provides the most balanced take on the mechanics.

Each side’s security cards are decided by the top five cards of the deck after shuffling, and before drawing a hand. When attacked, a security card is flipped over and comes into play. If it’s a monster, a fight ensues if it’s an effect card—called tamer and option cards—it’s discarded, unless it has a security effect. Many monsters and tamers have alternate moves for being played as securities. Some, like Heaven’s Charm, put themselves into your hand, others, like Heaven’s Gate, power up all your Digimon and security Digimon by 5000, before going back to your hand.

That power-up is crucial. For more powerful digital beasts, checking more than one security becomes a regular power, so if you can give any monsters that will pop up a boost, you’re doing yourself a favor. Battles are decided on a one-on-one basis, decided by the DP value every creature has. The thrust of the game is manipulating those numbers as regularly as possible, like with the rare Holy Angemon, who takes away 1,000 DP from an opponent’s ‘Mon, or the tamer Takaishi Takeru, that gives all your security-mon 2,000 DP during your opponent’s turn.

Combined with Unimon, a relatively cheap attacker that can block attacks as if he were a security, and Angewomon, who recovers one security when you play her through Digivolution, and Heaven’s Yellow gives you a taste of the machine that underpins Digimon Card Game. At $16, it’s as good a start as any.

Speaking of Digivolution, this game is structured around building monsters up as you go. First you hatch them, then you gradually evolve them over time. Digivolution is cheaper than regular summoning, and creatures often have lasting effects through being part of a Digivolution stack, or evolution base, as it’s known. As such, custom decks are a good way of understanding the ways to build around getting something big on the field.

This Rookie Rush deck is emblematic of the ways you can side-step that.  This deck features four of the rare Upamon, whom you can hatch once per turn. Upamon’s power allows you to draw a card if your opponent has no Digivolutions on the field and normally runs around $8 per card. The deck also includes a small army of low-level monsters, like Bearmon, Armadillomon, Mushroomon, and Tsukaimon, who are all around the 3000-4000 power range, and cost little to bring out. A rare, but weak, form of Gabumon, lets you draw a card when it’s played, and the rare Flower Cannon, which suspends one of your opponent’s Digimon, and if it’s a security, suspends all of them that aren’t blockers. These are between six and eight dollars in singles.

One bigger monster, Puppetmon, capitalizes on the suspend power, which stops the monster from being used for a full turn. All in all, at $60 or so, you’re getting a mean deck, and some excellent additions for trading.

For something that’s more lateral and straightforward, this deck is all about one thing: working through the Digivolution ranks to get out VenomMyotismon then flanking him as he pummels the other competitor. The entire color is purple, giving you uniformity for Digivolution – you match color and required level – and alongside the namesake are a few other heavyweights for damage.

WereGarurumon and Kimeramon both have 7,000 DP, the latter a rare that has the power to sacrifice your Digimon for one of your opponent’s that’s under level 5, worth around $7 per single, with four in the deck.

For fans of the show, the Garurumon line, from Gabumon through to WereGarurumon, are included, as is his trainer, Matt, as a rare Tamer card. This Matt Ishida lets you put one purple digimon or option card from the trash to your hand, and runs for about $8 on its own.

All of these around the 12,000 DP VenomMyotismon mean this deck, at $45 all in, will make you the digital ruler in no time at all.