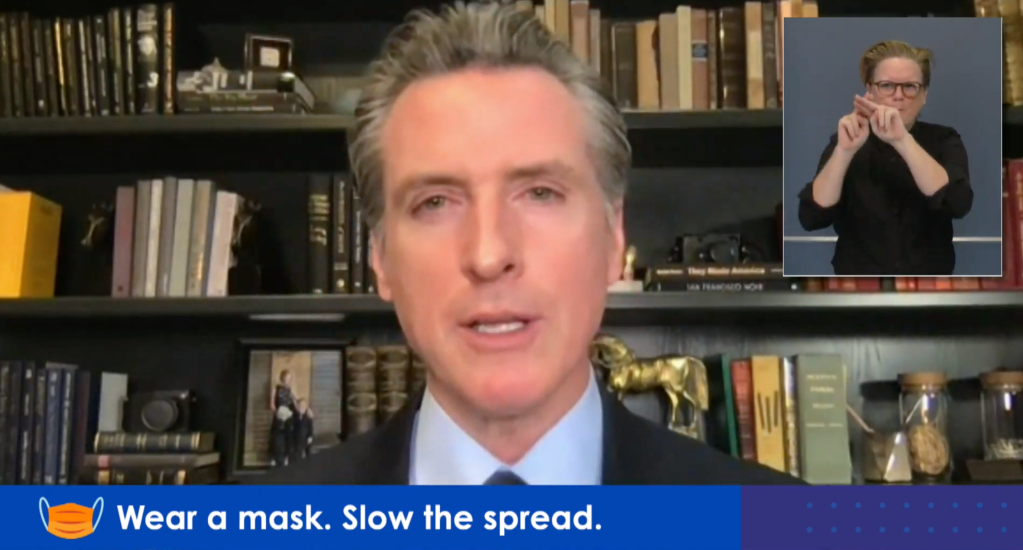 Almost exactly two weeks after California Governor Gavin Newsom announced what became a new lockdown for most of the state’s population, the daily number of new cases has fallen for five successive days. Granted, those numbers are dropping from an all-time new daily case high for the state — or any state, for that matter — of 53,711 announced last Wednesday.

Since then, numbers have dropped steadily, from a slight dip to 52,281 on Friday to the much-lower 32,659 recorded on Tuesday. That’s a 39.2% drop in less than a week and good news to beleaguered Californians.

State and local health officials have often said it would take 2-3 weeks to see the first impact of any new restrictions on daily numbers. Tuesday’s drop seems in accordance with that prediction.

In a December 3 press release, California Gov. Gavin Newsom announced his Regional Stay-at-Home order would go into effect on Saturday at 12:59 p.m. PT. The triggering metric for the order would be when a region of the state has under 15% of its ICU beds left. That region would then have 48 hours to make adjustments.

Two of the state’s five regions were soon under that threshold, with Southern California entering stay-at-home restrictions on Sunday, December 6. The order prohibits any kind of dining at restaurants, it closed hair salons, amusement parks and movie theaters entirely.

On Monday of this week, Newsom hinted that there may be some softening of the rise of the daily new cases numbers but, he said, that could also be the impact of data delays over the weekend. Tuesday’s number of new cases would seem to belie the data delay theory.

During his Monday news conference, the governor said the 7 day average of new cases was 43,901 and noted that the more decent daily numbers were “tracking slightly lower” than the average. Some have inquired, Newsom reported in his normal circuitous pattern of speech, “as relates to the data that’s come in the last four days if we may be seeing a modest — very modest — decrease in the total case growth rate. Still too early to tell…but we’ll take a look at this in the next few days and come back…to give you our professional assessment.”

The other side of the coin is that even if daily cases are dropping because of the new restrictions, Tuesday’s number is still much higher than the daily count — 20,759 — before the restrictions.

But Newsom’s order was predicated on ICU capacity, not daily cases, because the overwhelm of the state’s acute care system would certainly lead to a much greater number of deaths. And ICU units are still overwhelmed. The state’s available capacity dropped from 2% on Monday to 1.4% on Thursday. And the resulting increase in hospitalizations and ICU patients from the current high number of new cases and the last week of so of record numbers has yet to be felt, so it’s unlikely that the decrease in cases will lead to a lifting of the order.

On Monday, the governor was asked about a growth model showing there may be 99,000 virus-related hospitalizations by mid-January.

Newsom said in mid-November that there were 73,867 hospital beds in the state. That number has doubtless grown as health care officials have implemented surge plans. But even if it has grown 50%, having 99,000 Covid-19 patients in the state would potentially crush the hospital system, given there would still be all the other maladies — heart attacks, car accidents, etc. — that need immediate attention.

“We are anticipating a substantial increase in the hospitalizations,” said Newsom before acknowledging that some of the models put total virus hospitalizations above 90,000 by mid-January. (It should be noted that while two respected models have the state over 90,000, many others show surprisingly low numbers of hospitalizations.)

“Some regions may begin to exceed not just their ICU capacity, but their hospital capacity,” said Dr. Mark Ghaly, California’s Director of Health and Human Services.

Health officials have begged residents for weeks to avoid gathering with those outside their immediate household, but early data shows the Christmas holidays will see more Americans traveling than at any other time during the pandemic, including Thanksgiving.

On Monday the California Governor announced that many areas of the state would likely see an extension of his 3-week stay-at-home order which is set to expire in Southern California on December 30.

“Based upon all the data,” said Newsom, “It’s very likely that we’re going to extend the stay at home order.” Another part of the state likely to see the order extended is the San Joaquin Valley which, along with Southern California, is at 0% ICU capacity, according to adjusted state numbers.