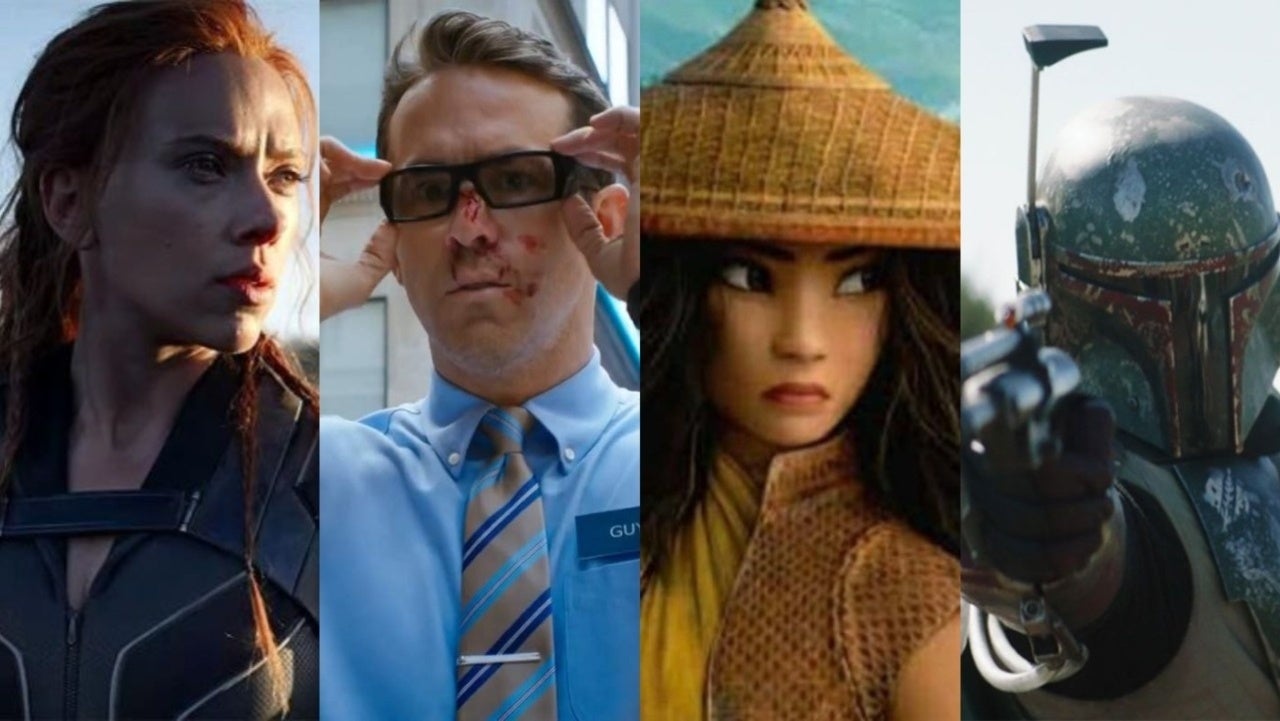 After the coronavirus pandemic shut down productions and closed movie theaters, every studio in Hollywood was forced to move many of their major titles out of 2020. This means that 2021 is going to be a massive year for entertainment, with films and TV projects that were supposed to be released in 2020 filling up all available space. Studios have a ton of projects lined up for the new year, and that goes double for Disney, which owns quite a bit of intellectual property.

Between the original Walt Disney Studios, Pixar, Marvel, Star Wars, 20th Century Studios, and the new Disney+ streaming service, Disney has a slate of more than 30 new movies and TV shows set to arrive in 2021. It’s set to be a massive year for the House of Mouse.

On Tuesday, nearly two weeks after the major Investor Day presentation, Disney released its full slate of 2021 projects. There are 32 in all, two of which remain untitled at this time.

As for the projects that have titles, you can take a look at the entire upcoming slate below, complete with images and some descriptions. The year kicks off on January 15th with the first live-action TV series from Marvel Studios, WandaVision.

Synopsis: “Marvel Studios presents WandaVision, a blend of classic television and the Marvel Cinematic Universe in which Wanda Maximoff (Elizabeth Olsen) and Vision (Paul Bettany)—two super-powered beings living idealized suburban lives—begin to suspect that everything is not as it seems.”

Synopsis: “Disney’s Flora & Ulysses is a delightful comedy-adventure based on the Newberry Award-winning book about 10-yearold Flora, an avid comic book fan and a self-avowed cynic, whose parents have recently separated. After rescuing a squirrel she names Ulysses, Flora is amazed to discover he possesses unique superhero powers which take them on an adventure of humorous complications that ultimately change Flora’s life–and her outlook–forever.”

Synopsis: “Walt Disney Animation Studios’ Raya and the Last Dragon travels to the fantasy world of Kumandra, where humans and dragons lived together long ago in harmony. But when an evil force threatened the land, the dragons sacrificed themselves to save humanity. Now, 500 years later, that same evil has returned and it’s up to a lone warrior, Raya, to track down the legendary last dragon to restore the fractured land and its divided people. However, along her journey, she’ll learn that it’ll take more than a dragon to save the world—it’s going to take trust and teamwork as well.”

Synopsis: “As a collection of history’s worst tyrants and criminal masterminds gather to plot a war to wipe out millions, one man must race against time to stop them. Discover the origins of the very first independent intelligence agency in The King’s Man.”

Synopsis: “Marvel Studios’ The Falcon and The Winter Soldier stars Anthony Mackie as Sam Wilson aka The Falcon, and Sebastian Stan as Bucky Barnes aka The Winter Soldier. The pair, who came together in the final moments of “Avengers: Endgame,” team up on a global adventure that tests their abilities—and their patience.”

The Bob’s Burgers movie will be a feature-length production of the beloved Fox animated series.

Synopsis: “Twentieth Century Studios and Locksmith Animation’s Ron’s Gone Wrong is the story of Barney, a socially awkward middle-schooler and Ron, his new walking, talking, digitally-connected device, which is supposed to be his ‘Best Friend out of the Box.’ Ron’s hilarious malfunctions set against the backdrop of the social media age, launch them into an action-packed journey in which boy and robot come to terms with the wonderful messiness of true friendship.”

Synopsis: “In Marvel Studios’ action-packed spy thriller Black Widow, Natasha Romanoff aka Black Widow confronts the darker parts of her ledger when a dangerous conspiracy with ties to her past arises. Pursued by a force that will stop at nothing to bring her down, Natasha must deal with her history as a spy and the broken relationships left in her wake long before she became an Avenger.”

Synopsis: “In Twentieth Century Studios’ epic adventure-comedy Free Guy, a bank teller who discovers he is actually a background player in an open-world video game, decides to become the hero of his own story…one he rewrites himself. Now in a world where there are no limits, he is determined to be the guy who saves his world his way…before it is too late.”

Synopsis: “Marvel Studios’ Loki is set to debut on Disney+ in May 2021, featuring the God of Mischief as he steps out of his brother’s shadow in a new series that takes place after the events of Avengers: Endgame.”

Synopsis: “Set in a beautiful seaside town on the Italian Riviera, Disney and Pixar’s original feature film Luca is a coming-of-age story about one young boy experiencing an unforgettable summer filled with gelato, pasta and endless scooter rides. Luca shares these adventures with his newfound best friend, but all the fun is threatened by a deeply-held secret: they are sea monsters from another world just below the water’s surface.”

Synopsis: “Marvel Studios’ Shang-Chi and The Legend of The Ten Rings stars Simu Liu as Shang-Chi, who must confront the past he thought he left behind when he is drawn into the web of the mysterious Ten Rings organization.”

Synopsis: “Join fan favorites Dwayne Johnson and Emily Blunt for the adventure of a lifetime on Disney’s Jungle Cruise, a rollicking thrill-ride down the Amazon with wisecracking skipper Frank Wolff and intrepid researcher Dr. Lily Houghton. Lily travels from London, England to the Amazon jungle and enlists Frank’s questionable services to guide her downriver on La Quila—his ramshackle-but-charming boat. Lily is determined to uncover an ancient tree with unparalleled healing abilities—possessing the power to change the future of medicine. Thrust on this epic quest together, the unlikely duo encounters innumerable dangers and supernatural forces, all lurking in the deceptive beauty of the lush rainforest. But as the secrets of the lost tree unfold, the stakes reach even higher for Lily and Frank and their fate—and mankind’s—hangs in the balance.”

Synopsis: “Based on the celebrated novel by famed mystery writer Patricia Highsmith (The Talented Mr. Ripley), Deep Water takes us inside the marriage of picture-perfect Vic (Ben Affleck) and Melinda (Ana de Armas) Van Allen to discover the dangerous mind games they play and what happens to the people that get caught up in them.”

“Acclaimed filmmaker Peter Jackson’s The Beatles: Get Back is a unique cinematic experience that takes audiences back in time to The Beatles’ intimate recording sessions during a pivotal moment in music history.”

Synopsis: “What If…? flips the script on the MCU, reimagining famous events from the films in unexpected ways. Coming to Disney+ in summer 2021, Marvel Studios’ first animated series focuses on different heroes from the MCU, featuring a voice cast that includes a host of stars who reprise their roles.”

A series of shorts from Pixar that follow Dug, the energetic canine from Up. The series is set to arrive sometime in Fall 2021.

Synopsis: “Belgian sleuth Hercule Poirot’s Egyptian vacation aboard a glamorous river steamer turns into a terrifying search for a murderer when a picture-perfect couple’s idyllic honeymoon is tragically cut short. Set against an epic landscape of sweeping desert vistas and the majestic Giza pyramids, this tale of unbridled passion and incapacitating jealousy features a cosmopolitan group of impeccably dressed travelers, and enough wicked twists and turns to leave audiences guessing until the final, shocking denouement.”

“From Twentieth Century Studios and visionary filmmaker Ridley Scott comes The Last Duel, a gripping tale of betrayal and vengeance set against the brutality and female oppression of 14th century France.”

Synopsis: “Marvel Studios’ Eternals welcomes an exciting new team of Super Heroes to the Marvel Cinematic Universe. The epic story, spanning thousands of years, features a group of immortal heroes forced out of the shadows to reunite against mankind’s oldest enemy, The Deviants.”

Synopsis: “Walt Disney Animation Studios’ Encanto tells the tale of an extraordinary family, the Madrigals, who live hidden in the mountains of Colombia, in a magical house, in a vibrant town, in a wondrous, charmed place called an Encanto. The magic of the Encanto has blessed every child in the family with a unique gift from super strength to the power to heal—every child except one, Mirabel. But when she discovers that the magic surrounding the Encanto is in danger, Mirabel decides that she, the only ordinary Madrigal, might just be her exceptional family’s last hope.”

Synopsis: “Marvel Studios’ Ms. Marvel, launching on Disney+ in late 2021, is a new series that introduces Kamala Khan—a 16-year-old Pakistani-American growing up in Jersey City. A great student, an avid gamer and a voracious fan-fiction scribe, she has a special affinity for superheroes, particularly Captain Marvel. But Kamala struggles to fit in at home and at school—that is, until she gets super powers like the heroes she’s always looked up to. Life is easier with super powers, right?”

Synopsis: “Marvel Studios’ Hawkeye stars Jeremy Renner as Hawkeye, who teams up with another well-known archer from the Marvel comics, Kate Bishop, played by Hailee Steinfeld.”

Synopsis: “Boba Fett’s journey will continue in The Book of Boba Fett, which will be set within the timeline of The Mandalorian and star Temuera Morrison as the titular bounty hunter, along with Ming-Na Wen as Fennec Shand.”

Disney will be rebooting the Diary of a Wimpy Kid franchise in 2021 with a new project coming exclusively to Disney+.

Synopsis: “Inspired by true events, New Regency’s and Film4’s Everybody’s Talking About Jamie is the film adaptation of the hit musical that tells the story of 16-year-old Jamie New, who dreams of becoming a drag queen.”

After three feature films, Disney will be reviving Night at the Museum as an animated project on the Disney+ streaming service.

Synopsis: “Star Wars: The Bad Batch follows the elite and experimental clones of the Bad Batch (first introduced in The Clone Wars) as they find their way in a rapidly changing galaxy in the immediate aftermath of the Clone War. Members of Bad Batch—a unique squad of clones who vary genetically from their brothers in the Clone Army—each possess a singular exceptional skill that makes them extraordinarily effective soldiers and a formidable crew. In the post-Clone War era, they will take on daring mercenary missions as they struggle to stay afloat and find new purpose.”

Chingy Guests On The Simonetta Lein Show On SLTV
Can Freedom of Speech Destroy Freedom of Speech? Facebook Says Trump Can Come Back. By Howard Bloom
‘Heart goes out to loved ones’ – 10 people killed in gun attack near Los Angeles
British airline Flybe ceases all trading and cancels scheduled flights
Speakers call for overhaul of All-Party Parliamentary Groups