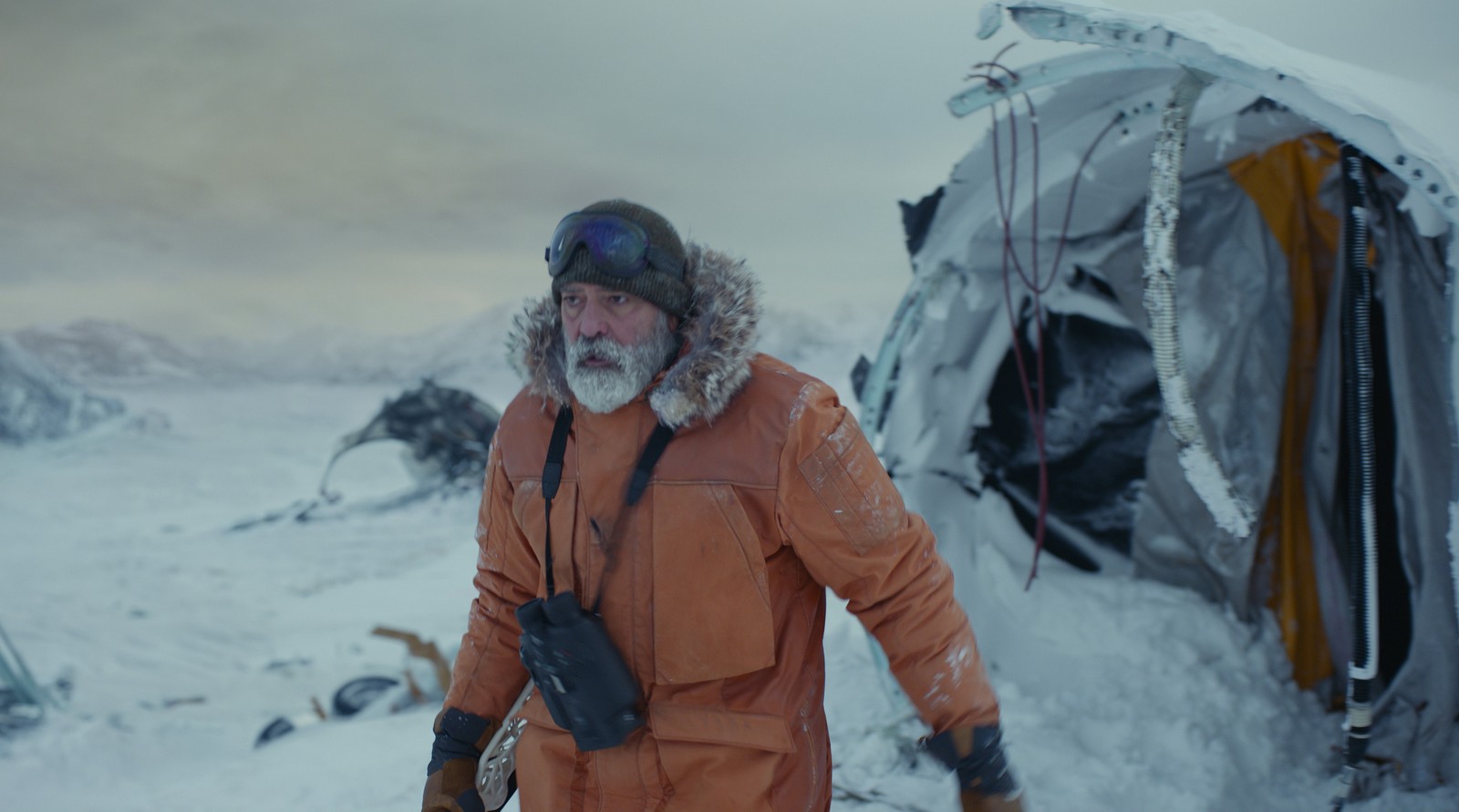 George Clooney has a relatively simple answer when asked by Den of Geek what inspired him to make his first science fiction film as a director, The Midnight Sky.

We’re speaking with Clooney via Zoom, of course, in the ninth month of the never-ending COVID-19 pandemic, and after briefly commiserating about the last time we saw our parents (eight months for him, longer for us), we turn to the film, which is based on a novel called Good Morning, Midnight by Lily Dalton-Brooks and premieres on Netflix this week.

In the film, Clooney plays Augustine Lofthouse, a brilliant but lonely astrophysicist stationed at a remote Arctic research facility. It’s three weeks after “the Event,” an unspecified global cataclysm that is spewing enough radiation into the atmosphere to make the Earth uninhabitable. With the rest of the station’s crew headed south to reunite with their families and either prepare for the end or find a place to hide out, Augustine — who’s suffering from a terminal illness — decides to stay behind.

But he also has an important mission to complete with the time he has left to him: contacting the crew of an exploratory ship that’s returning from a habitable moon orbiting Jupiter and warning them to turn back and start a new life there (Augustine himself discovered the planetoid). Meanwhile, the ship’s crew, headed by David Oyelowo and a pregnant Felicity Jones, grow increasingly uneasy at the silence from Earth even as their craft is buffeted by asteroids and other dangers.

At the same time, Augustine finds himself caring for a little girl named Iris (Caiolinn Springall) who can’t speak and has apparently been left behind accidentally. He also learns that the transmitter at the facility isn’t powerful enough to communicate with the vessel. With the girl in tow, Augustine begins a treacherous journey through the ice and snow to reach another station with a stronger transmitter.

“I had an idea of the story I wanted to tell,” continues Clooney. “And when I talked to Netflix, I said, ‘This isn’t an action film, it’s a meditation. It’s a conversation about regret and about redemption. We’re going to take out some of the lines and we’re going to use score to tell the story,’ And they, to their credit, said, ‘Great.’”

The Midnight Sky is marked by passages of silence or sparse dialogue, particularly during the Earthbound scenes, but dialogue and personal drama are nothing new to Clooney, whose previous directorial efforts include films like Good Night, and Good Luck and The Ides of March. But even when it came to the effects-heavy material set on the ship or in space, the director wasn’t fazed.

“I’d done a couple of space movies so I had some understanding of how difficult space would be and what the preparation for it would be,” Clooney explains, referring to his starring turns in Steven Soderbergh’s Solaris and Alfonso Cuaron’s Gravity. He adds that he didn’t call his old friends and directors for advice on shooting the space-based scenes either.

“I was on the set (on those movies),” Clooney elaborates. “I didn’t go back to the trailer. I’m from Kentucky. We try to stay out of trailers, you know what I mean? So I’ve always sat on sets. And I watched Alfonso and Steven. Alfonso, particularly for the spacewalk stuff, the things that he and Chivo (cinematographer Emmanuel Lubezki) did were really helpful.”

Clooney’s actors had to prepare for the spacewalk sequences in a different way. Tiffany Boone, who plays the astronaut Maya on her first mission aboard the Aether, explains, “I watched every documentary and every docu-series I could specifically about long periods in space. There was one that a few of us watched… I watched, I read books, I just, I really tried to find out what that experience is kind of like to be in space for a little while.”

Boone adds that she hired a trainer in preparation for the spacewalk sequence, saying, “I went to London and I worked on my core there. Every day that I was in London, I was training pretty much. Wire work, core training, and pretending to be in zero gravity. That little spacewalk that you see, that lasts under 10 minutes in the movie, took for me a good four or five months in total to make happen.”

Both Felicity Jones and David Oyelowo agree that getting to play astronauts in a movie scratches some kind of childhood itch — although in Jones’ case, only up to a point.

“I think it’s definitely one of those professions that you think, ‘Gosh, that would be a pretty exciting one,’” the Rogue One star says. “I think as I got older, I found it less enticing to want to go off into space. I’m not into small enclosed spaces, so I think I’d find the claustrophobia a bit too much. It’s extraordinary, these astronauts who go up and spend a year in space. I think that’s so admirable because to be an astronaut, there’s a huge element of self-sacrifice because you don’t know what’s going to happen.”

Unlike in Gravity, Clooney does not walk in space himself in The Midnight Sky, but went through a physical transformation of a different sort. To play the dying Lofthouse, Clooney lost weight and made sure to shoot his own scenes first — with the focus on the march across the Arctic plains.

Oyelowo adds, “I think being an astronaut in a movie’s a little bit like being a cowboy or being a detective. There’s something iconic about those professions when it comes to cinema, not least because great actors have made them iconic.” He expands on that, saying, “When you get in that suit, when you get on set, you do feel like you are stepping into one of the special opportunities afforded an actor when it comes to cinema. Especially when it’s a film on this grand scale.”

“It would have been really hard to do it the other way around,“ he says. “The beauty of it is for us, literally, we only shot my stuff first and then we only shot their stuff afterwards. There wasn’t this sort of crossbreeding that can make things really difficult and hard to do. It’s hard to jump back in an actor’s chair where you’re directing yourself. So I had a great advantage by being able to schedule it that way.”

Another member of the cast, Felicity Jones, was also going through her own physical transformation of sorts while shooting the movie: she was pregnant with her first child. But rather than treat that as an impediment, to be filmed around or ignored (or worse, used as a reason to replace the actress, like a studio might have done in the old days), Clooney came up with a better solution: Jones’ pregnancy was written into the script, adding another layer to the stakes facing the crew of the Aether.

“It’s extraordinary, when you look at the list of actresses who’ve been pregnant while shooting, you’d be surprised that in some of the most iconic films in history, the leading actress has been pregnant,” says Jones. “But for the most part, pregnancy has been something that has been CGI’d out or disguised. So it felt revolutionary. It did feel very special that in a film of this scope and scale, having a pregnant astronaut is pretty spectacular and it was a testament to George’s modernity that he wasn’t scared of it, that he embraced it, and saw how it could benefit the storytelling.”

Indeed, the idea that Jones’ character Sully, her unborn baby and her fellow crew members could be the last humans left alive is perhaps even more profound now, nine months into a pandemic that seems to show no signs of ending, than it was when Clooney and company first started shooting the movie. “We finished shooting in early February,” the director says. “We came to LA to start the editing, and immediately we were told to lock down. I wasn’t able to see my parents, we weren’t able to see our family, like we just talked about.”

Tiffany Boone muses that audiences watching The Midnight Sky will get something different out of it than they might have if the world hadn’t turned upside down in 2020. “Part of why I love the script is because I thought it was really timely and had something to say about the times we were living under,” she says. “I had no idea it would be as relevant as it is…that’s all of our reality, being separated from the people we love and hoping that they’re taking care of themselves and trying to find some connection even when we can’t be in person.” She concludes, “I think it’s going to hit people even harder.”