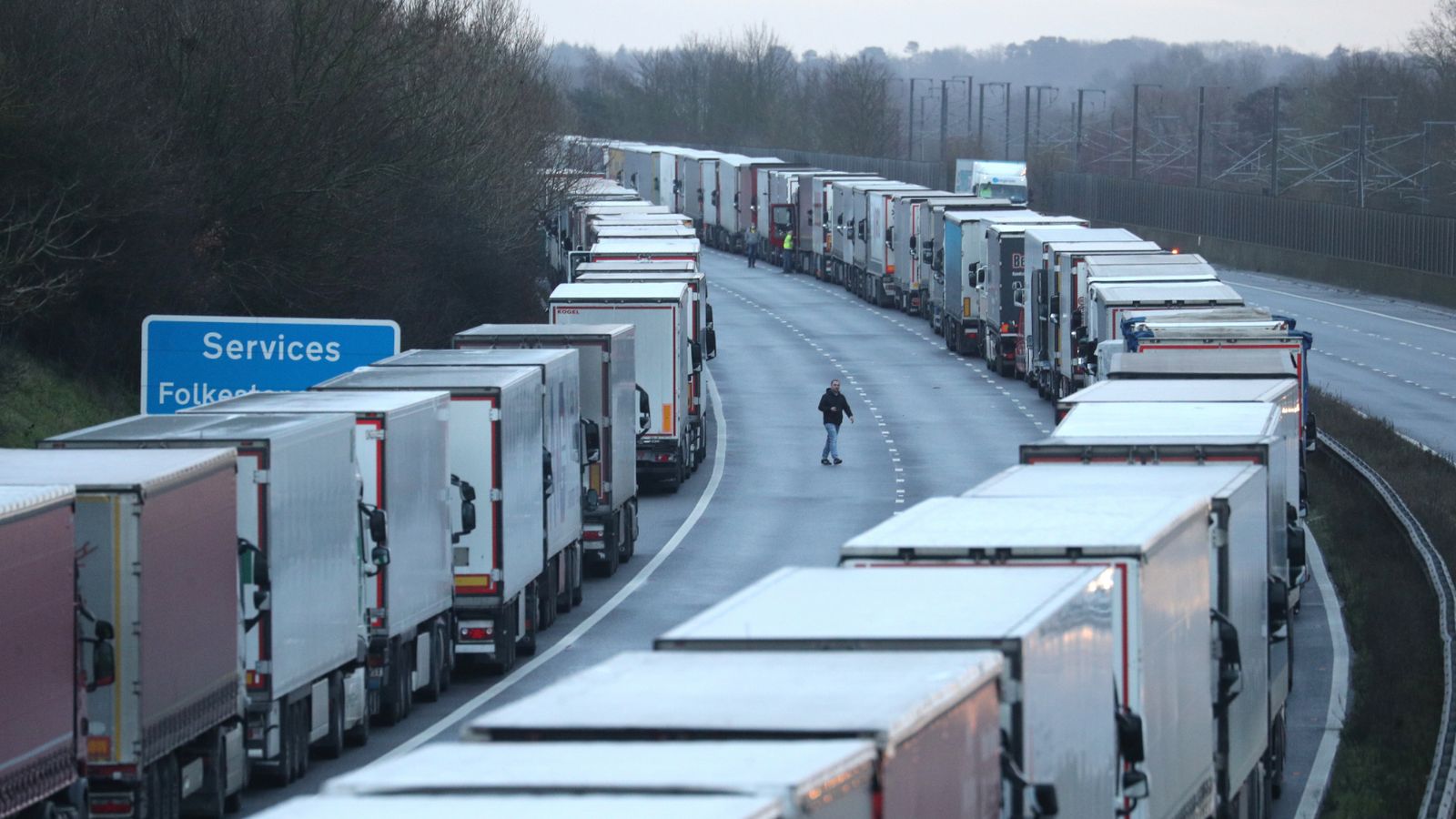 The government has made ”good progress” in talks with France over reopening the country’s UK border, Transport Secretary Grant Shapps has announced.

More than 2,800 lorries have been left trapped in Kent after France shut its border to UK travellers on Sunday night, following fears over the spread of a new coronavirus variant.

But only French nationals, those who are normally reside in France, or those making essential journeys, will be able to travel.

These groups will also have to provide a negative COVID test – of a sort that detects the new variant – prior to departure.

Mr Djebbari thanked Mr Shapps on Twitter for the “amazing work we have done” over the past 48 hours.

A statement from the office of French Prime Minister Jean Castex said the “specific procedures” for resuming road freight traffic would be “specified in the coming hours”.

In his own Twitter post on Tuesday evening, Mr Shapps wrote: “Good progress today and agreement with the French Government on borders.

“We will provide an update on hauliers later this evening, but hauliers must still NOT travel to Kent this evening.”

It comes after Prime Minister Boris Johnson and French President Emmanuel Macron spoke on Monday, with UK and French officials attempting to reach an agreement to unlock the ban on Tuesday.

The disruption on the South Coast had seen the M20 motorway in Kent closed on Monday night to allow the implementation of Operation Brock.

The action, which involves using a moveable barrier to keep traffic moving on the motorway whenever there is disruption at the Channel, had been prepared for possible Brexit delays early in the New Year, but was called upon early.

More than 600 lorries were queued on the M20 by Tuesday evening, with 2,180 more forced to wait at a former airfield site in Manston, Kent.

Many lorry drivers had spent a second night sleeping in their cabs as they awaited news of a decision on the border.

France was among more than 40 countries around the world to have implemented travel restrictions on the UK due to the mutant variant of coronavirus, which spreads more readily than previous strains.

UK supermarkets had warned of shortages of some fresh fruit and vegetables if the disruption had continued.

Ian Wright, chief executive of the Food and Drink Federation, said that while shoppers “need have no concerns about food supplies over Christmas”, the consequences could be felt soon after.

The European Commission had earlier on Tuesday urged member states that have restricted travel from the UK to lift their bans to allow essential travel and minimise trade disruption.

Logic Drops Kevin Smith-Directed ‘Highlife’ with Cast of ‘Clerks’
Housebuilders to meet Hunt for talks as industry tax bill soars
Here’s How Moms For Liberty Is Lying About Books
What’s Next for DC Studios: The Good, the Bad, and the Bizarre
8 Books Like REMINDERS OF HIM by Colleen Hoover