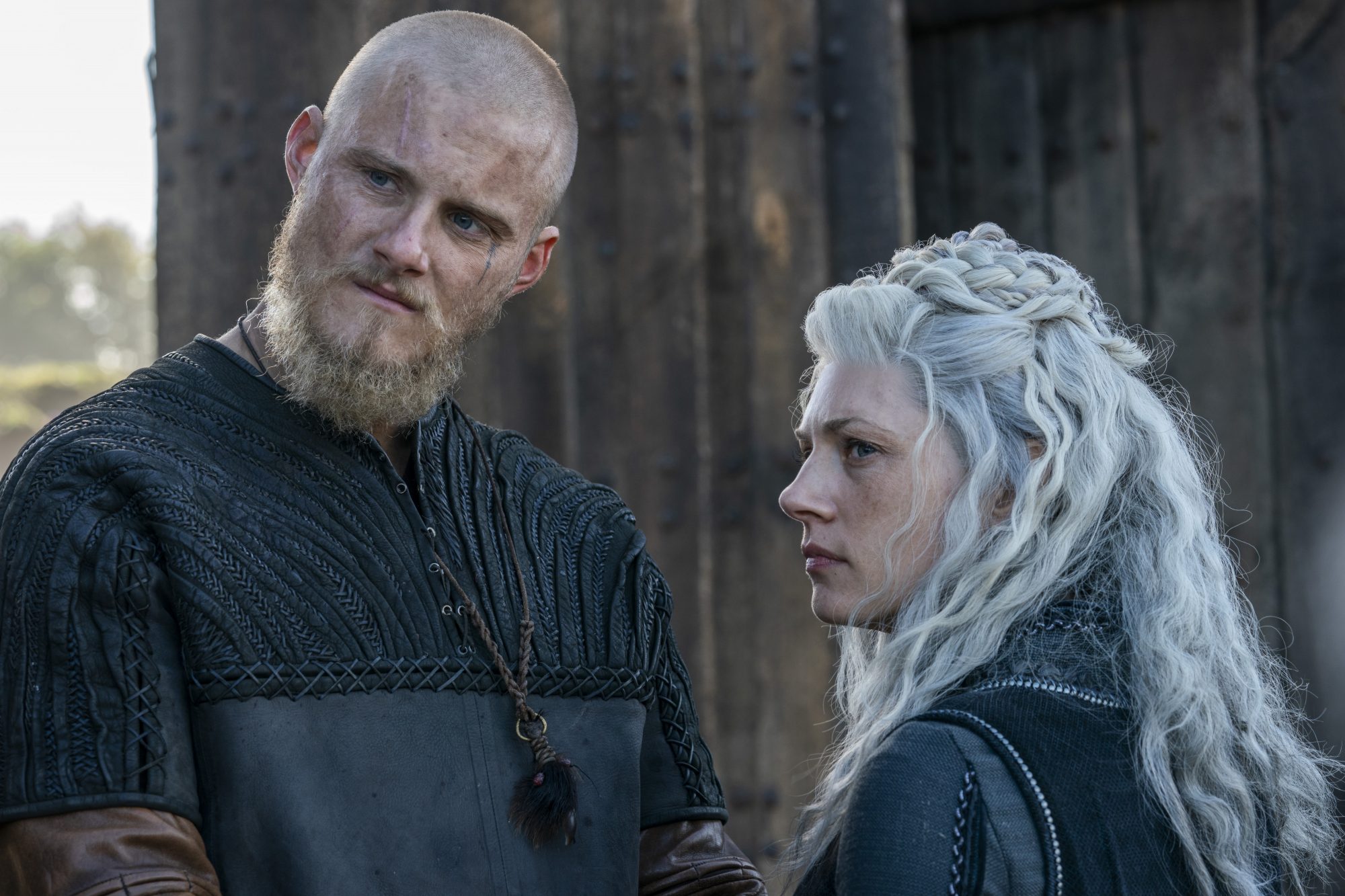 This article contains spoilers for Vikings season 6 part one.

Season five of Vikings saw Ivar’s dreams of rule, romance, and Godhood collapse around him like a volcano on Floki’s head. Defeated by his band of brothers, betrayed by his wife, Freydis, the tyrant was forced to disguise himself as a peasant and smuggle himself out of Kattegat in the back of a merchant’s cart.

We left our heroes (a relative term in the topsy-turvy, strifey-knifey world of Vikings, admittedly) ready to begin the task of rebuilding their lives and their stronghold of Kattegat, all the while standing in the rising dawn of a new era of exploration, and contemplating, for the first time in a long time, the promise of peace.  It was too good to be true, wasn’t it? Vikings season 6 part 1 wasted little time in raising the stakes and turning up the heat. In anticipation of the final batch of episodes, scheduled to drop on Amazon Prime on Dec. 30, let’s remind ourselves of the events leading up to one of the most gut-wrenching mid-season finales the show has ever produced.

A dejected Ivar makes his way along the Silk Road. He and his bodyguard Vigrid are captured by the Kievan Rus and taken before Prince Oleg the Prophet. Vigrid is tortured and killed, but Ivar is spared when Oleg learns of his past status as King and ‘God’. While they are kindred spirits in many ways – both have a pathological thirst for power, both were betrayed by women and responded with murder – Oleg relishes Ivar most of all because he realizes he might be useful when the time comes to retake the Rus’s ancestral lands in Scandinavia. Ivar, in turn, wonders how the mad Prince might prove useful to his festering ambitions.

Ivar and Oleg take their knife-edge bromance on the road, travelling to Novogrod to meet with Oleg’s brother, Askold. Oleg wants to retrieve his nephew Igor, who is heir to the throne and therefore the nexus of power in the region. In a characteristically awful yet expedient move, Oleg poisons Askold and takes off with Igor. Dir, Oleg’s other brother, tracks Oleg down attempts to arrest him for murder and kidnap. Oleg escapes his fate by giving a demonstration of his prophetic powers. He not only reveals to all assembled that Dir has a secret wife, but produces her, like a rabbit out of a hat.  Dir, wary and superstitious, lets Oleg go free. Never one to let bygones be bygones, Oleg swiftly orders that his brother be attacked, imprisoned, mutilated and bound up like a junkyard dog.

Meanwhile, a warm bond – part-fraternal, part-paternal – is developing between Ivar and Igor.  Ivar feels sorry for the captured heir and wants to help him. The duo release Dir, and Ivar promises to help liberate Igor and depose Oleg when the time is right.

Tensions build between Ivar and Oleg. When Ivar discovers Oleg is raising an army to sack and conquer Scandinavia, Ivar accuses him of using him as a puppet, a vassal. Oleg later introduces Ivar to his new beau, Princess Katia, who is a doppelganger of Ivar’s dead wife, Freydis. The resemblance is so striking that Ivar suspects both that she might be the real thing, and that Oleg is up to something. Oleg and Katia force Ivar to watch them making love on their wedding night.

Bjorn decides against executing Ivar’s followers and their leader, White Hair, and banishes them instead, leaving their ambitions to ‘Make Kattegat Great Again’ thwarted.

Bjorn asks Ubbe, Lagertha, Torvi and Gunnhild to act as his counsel, a little sliver of proto-democracy in these feudal, quasi-monarchistic times. Only Gunnhild agrees to serve. The rest have bigger, or at least other, fish to fry. Torvi and Ubbe wish to sail to Iceland. The recently returned Kjetill tells them that Othere – the fabled explorer and discoverer of lush and verdant lands to the west of Iceland – awaits them there. Lagertha wants to return to her old homestead and live out the rest of her life as a humble farmer.

Word reaches Bjorn that King Harald needs his help. Olaf has invaded Harald’s kingdom of Vestfold and taken him prisoner. Bjorn agrees to help, leaving Ubbe in charge, and sending his children Hali and Asa to stay with Lagertha. Before he leaves he has a bout of passion with Ingrid, his wife Gunnhild’s servant. Bjorn convinces Kjetill to join him on his rescue mission, and while in each other’s company Bjorn learns of Kjetill’s Icelandic blood-lust, which makes him deeply suspicious of the burly emigre’s connection to Floki’s disappearance.

Once in Vestfold, Bjorn hatches a plan to swim into the harbor and surprise Olaf and his troops. Unfortunately, King Olaf has anticipated this move, and has already taken the liberty of adding oil to the water, which he proceeds to ignite, causing mass casualties, and Bjorn’s retreat.

Olaf and Bjorn eventually meet to discuss their stalemate, whereupon Olaf reveals his grand plan. He wants all of the region’s earls and Kings to elect a King of all Norway, and he wants it to be Bjorn. There’s some constitutional wrangling, before the election proceeds. Harald is the surprise victor. It’s not a surprise to the audience, who have just watched Harald spend his short election campaign selling patently false, irreconcilable promises of land and riches to the other voters and candidates should they make him King. Kjetill helps to spread the word (and the lies), as he’s been promised King of Iceland.

Bjorn flees Vestfold on a tip-off from a suddenly conscience-struck Kjetill, who has discovered that Harald wants Bjorn dead on the (probably entirely correct) grounds that Bjorn would never bend the knee for him long-term. Kjetill and Bjorn are rescued from certain death by the outlaw Erik, who speeds them to safety on his boat. King Olaf is imprisoned when refuses to acknowledge Harald’s title.

Hvitserk and Lagertha – A Tragedy on Two Fronts

Hvitserk is hitting hallucinogens and intoxicants pretty hard, which precipitates a torrent of haunting images. He sees the seer, his hated brother Ivar, and experiences painful and terrifying visions of the murder of his girlfriend, Thora (burned alive on Ivar’s orders last season) and the slaying of his mother, Aslaug (dispatched by Lagertha in season four). Ubbe, temporarily in charge, nominates Hvitserk to head a trading expedition along the Silk Road, but when Hvitserk misses the boat, thanks to his re-discovered fondness for drink and drugs, Ubbe can barely contain his disgust. News comes back from the Silk Road that Ivar is in Kiev. Hvitserk doesn’t react well. He has vowed to kill Ivar. The thought consumes him, and twists his perception of reality.

Away from the city, Lagertha’s cosy retirement isn’t going according to plan. She’s forced to train nearby villagers in the art of war to repel incursions from White Hair and his followers. White Hair attacks again, and many villagers perish, including Bjorn’s son, Hali. Gunnhild has a vision of the tragedy, and immediately sets off to Lagertha with some shield maidens. Gunnhild lends her weight to repelling the attacks. During the next assault, White Hair and Lagertha face each other, one-on-one. After a gruelling battle, Lagertha kills White Hair, but is herself gravely wounded. She decides to return to Kattegat, setting off on her own by boat.

It’s raining when she arrives, and most of the town is attending a feast. The only person she encounters on the deserted streets is Hvitserk, which is unfortunate for them both. Hvitserk is out of his mind on hallucinogens and thinks Lagertha is a serpent incarnation of Ivar. He duly stabs her to death, thereby fulfilling the long-ago prophecy of the seer that Lagertha would be killed by a son of Ragnar.

When Hvitserk’s rather obvious part in Lagertha’s death is uncovered, Bjorn puts him on trial. He’s initially sentenced to death, but Ubbe intercedes on his behalf, and he’s banished instead. The exiled Hvitserk finds himself on the Silk Road after all and, inevitably, back with Ivar, where he’s welcomed by Oleg for his assassination of the great shield maiden Lagertha.

Ubbe and Torvi set sail for Iceland. There Ubbe meets the renowned Othere, the man who claims to have discovered a new world to the west. Ubbe learns that Othere is really a Christian called Athelstan, who came upon the dying Othere and assumed his identity. Ubbe wants Othere sacrificed to the Gods, but Torvi points out that this would be a rather hypocritical move given his own history of baptism. Torvi gives birth to a baby boy, whom the couple name Ragnar. Lagertha may be dead, but Ragnar lives on.

Tsar Wars: The Exile Strikes Back

Oleg’s incursions into Viking land are troubling enough to usher in a truce between Harald and Bjorn, who realize they must come together to face a threat that is bigger than their personal and ideological differences. Unfortunately, when they call for other earls and kings to stand with them in battle, only Thorkin agrees to join them.

Friction abounds in Oleg’s camp. Igor openly defies his uncle, prompting Oleg to threaten his life. Katia tries to seduce Ivar. Though he refuses, he learns that Katia is deeply unhappy with Oleg, and hence a potential ally in the interfamilial treachery to come.

Ivar serves as strategist to Oleg. They head for battle and through a blend of cunning and superior numbers manage to breach Bjorn’s fortifications. A vicious battle ensues. Harald and Gunnhild appear to fall in battle. Bjorn, distracted on the battlefield, receives a seemingly fatal blow. It comes from Ivar. Bjorn’s forces are defeated, and Bjorn himself is slain.

Now all that remains is to wait and see what fate has in store for the sons of Ragnar, and Viking civilization itself, in the final ten episodes.