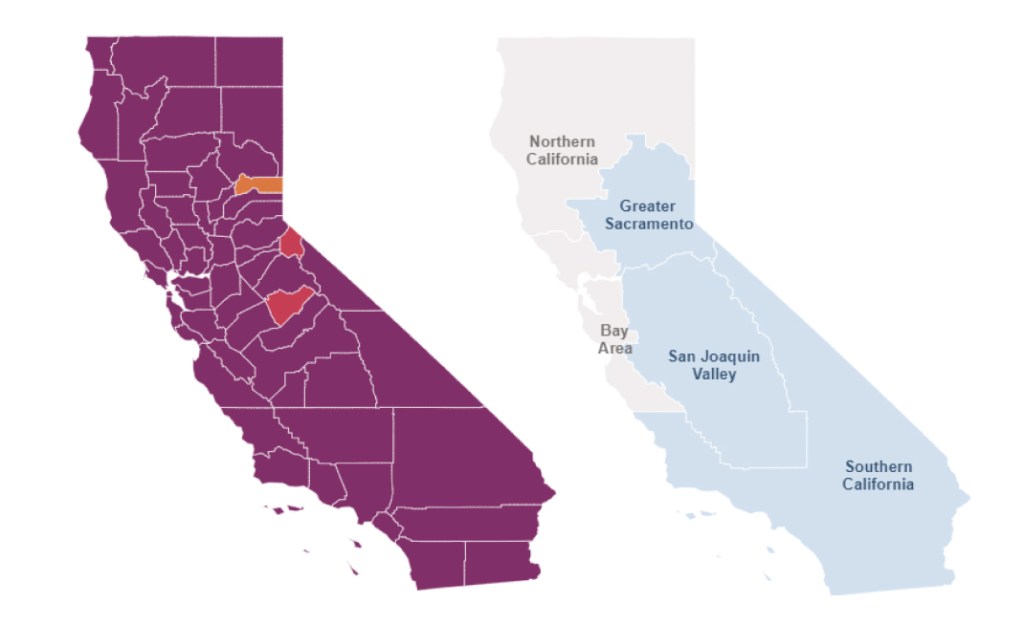 As of Tuesday, Dec. 22, California only has one of its 58 counties in the orange tier (considered moderate risk) and two counties in the red tier (substantial risk), according to the state’s four-tier coronavirus tracking system.

There are now 55 counties in the purple tier as of Tuesday’s updates. The same as the previous week.

The state is no longer doing a weekly update and tier assignments may occur any day of the week and may occur more than once a week, officials have said.

Counties are assigned to a tier based on metrics showing the speed and the spread of the virus in their borders.

Regional stay home orders have taken affect for the four out of five California regions, with only Northern California excluded. If a region has crossed the threshold of having less than 15% ICU availability the stay-at-home order goes into effect.

The orders prohibit private gatherings of any size, limits many business and public sector operations and capacities, and requires 100% masking and physical distancing.

These maps show the ICU capacity in each region as of Dec. 8, 15 and 22. The percentages here have been adjusted by state public health officials to represent the high levels of COVID-19 patients among all ICU patients. More actual beds may be available.

As for the Southern California region, nearly every county has had a significant increase in cases per 100,000 and positivity rates.

The states progression in tiers since Sept. 22:

Lil Yachty Says ‘I Love You’ Too Fast and Ruins the Vibe in ‘Say Something’ Video
Zayn Malik Signs With UTA
Fast-food workers urge employers to drop opposition to AB 257
Speakers call for overhaul of All-Party Parliamentary Groups
Eliminating SaaS Shadow IT is Now Available via a Self-Service Product, Free of Charge