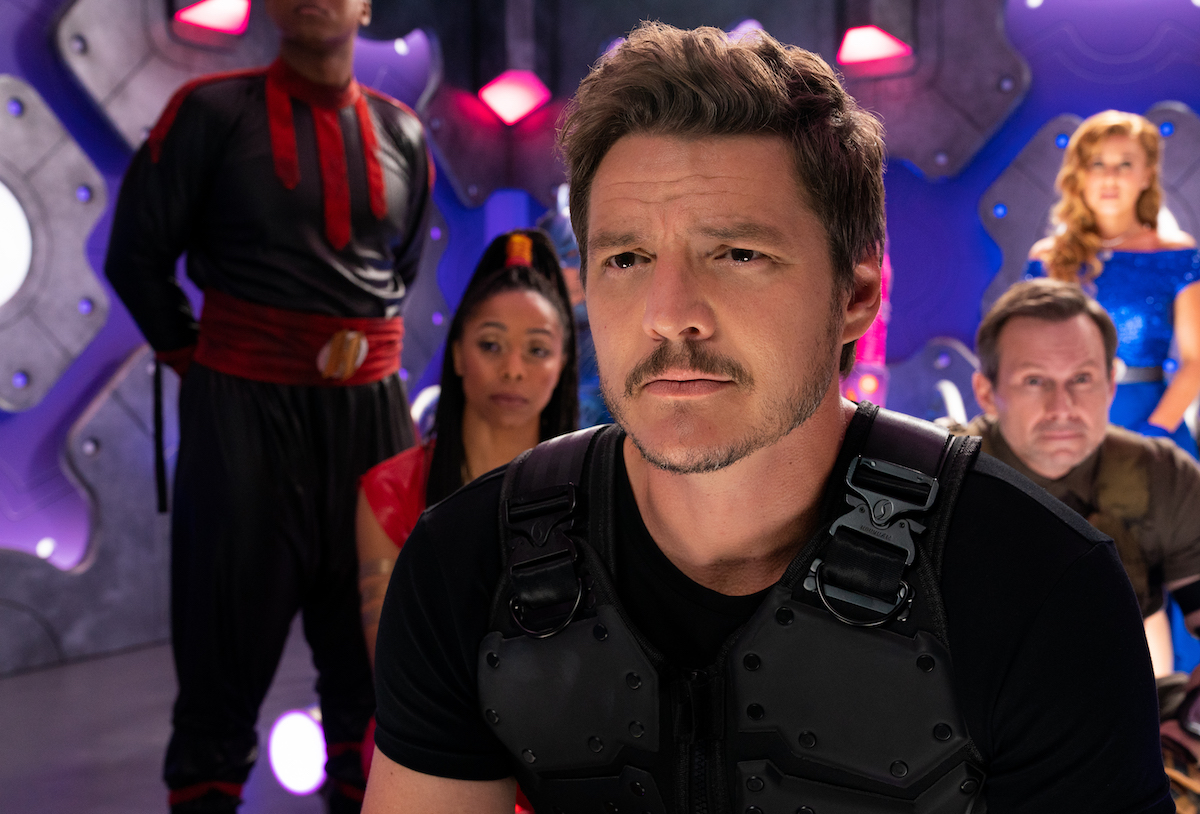 Robert Rodriguez is a man of many hats – in every sense of the word.

While he has been known to rock a fedora or two down the years, the idiom is more a reflection of his “one-man film crew” approach to movie-making, with Rodriguez known for not only writing, and directing but also doing everything from editing to operating the camera.

It’s also a reflection of his ability to turn his hand to disparate genres and movies aimed and markedly different audiences.

Having made his name with movies like El Mariachi and From Dusk till Dawn, the new millennium saw Rodriguez’s career take a surprising turn into the world of family-orientated action with Spy Kids.

A major success with critics and audiences alike, the film spawned three further sequels, with Rodriguez even roping in Sylvester Stallone for the third and fourth efforts.

Since then, he has happily flipped back and forth between the two worlds, with 2005’s The Adventures of Sharkboy and Lava Girl sandwiched in between work on Sin City and Planet Terror.

It’s a pretty stark contrast in cinematic terms but one Rodriguez happily explains while speaking to Den of Geek about his latest movie, We Can Be Heroes, a superhero movie about a group of kids forced to do battle with alien invaders who have kidnapped their superhero parents.

“You are using the same skills. You just have a different mindset as far as tone. It’s just like if you’re at work or out with your buddies, you’ve got one way of talking and then when you go home and you’re with your kids it’s dad time. You have your dad hat on.

“When I make these movies, I have the dad hat on and then when I am out with my buddies that’s Sin City mode, that’s Machete mode. That’s when that other side of me comes out.”

While the kids take centre stage in We Can Be Heroes, they are ably supported by an impressive adult cast that includes Boyd Holbrook, Priyanka Chopra Jonas, Christian Slater and Pedro Pascal.

It was the first time Pascal and Rodriguez had worked together, but it wouldn’t be the last. While working post-production on We Can Be Heroes, Rodriguez was recruited by Jon Favreau to direct an episode of The Mandalorian.

As such, he knows more than most about what makes Pascal such an engaging and intriguing presence on the screen.

“He reminds me of Harrison Ford in a way, he’s like this everyman type guy. He can be funny, he can be really intense, he can be very heroic but in We Can Be Heroes he kind of has to be a dweebish dad where it’s just all about him and his daughter [YaYa Gosselin].”

“He played that really well and was then also able to become this superhero. He can be very human and warm. In The Mandalorian he does a similar type of thing but with that heart. But he can play intense too. He’s got a wide range.”

“He reminds me of some of my favourite actors that I have worked with before like George Clooney. That’s why he’s got such a big career right now. People can see that he’s very much able to do 180 degrees in any direction.”

Working on The Mandalorian served as a stark contrast to his efforts on We Can Be Heroes but Rodriguez believes it definitely informed the making of this film.

“The Mandalorian is wonderful because you’ve got such a great big crew and they all know what they are doing and it’s a well-oiled machine. Jon Favreau is there, Dave Filoni is there, so I can just go in and direct.

“It was great to take a little break, go play with all the Star Wars toys and then come back and apply what I learned there to We Can Be Heroes, because they have a lot of cutting-edge technologies and techniques. I think this movie really benefited from side projects like that and Alita.”

We Can Be Heroes has been billed by some as a sequel to The Adventures of Sharkboy and Lavagirl but Rodriguez is keen to stress that this film doesn’t take place in the same universe.

“I wrote this as an original story for Netflix because they found movies like Sky Kids and Shark Boy and Lava Girl played really well on their service. Also, it is so rare to have live-action kids adventures for the whole family.”

“I love the genre so I came up with the idea for We Can Be Heroes where you have this adult Avengers-style team and then have little kids with superior powers but they don’t know how to use them.”

“I was surprised that there had never been superheroes that were kids, except for Shark Boy and Lava Girl back in the day, even after all these superhero movies and TV shows and spin-offs and reboots. I thought it was ripe for the taking.”

“The first script I turned in didn’t have Shark Boy or Lava Girl in it. But then I just thought let’s borrow their characters and bring them in as parents because it will help legitimise the adult team to have someone recognisable.  It was more like we borrowed them. It’s not set in that universe.”

Working on the film has certainly given Rodriguez an appreciation for the superhero genre, which he would be keen to explore in future movies though he does note that it’s a genre that could benefit from more diversity.

“I think superhero films are just like westerns. It’s really about the story being told through that genre.”

“That’s why people live in there. It’s not because they’re superheroes it’s because the stories are relatable.”

“The superhero genre is still really vital. There’s a lot of room to grow. I think it could use more diversity and I know I could bring that. So yeah, I would be interested in continuing with it.”

Rodriguez has always been a strong advocate for representation on the screen and once cited his biggest creative victory as having the kids in Spy Kids be part of a Latino family.

In that sense, We Can Be Heroes is another big win with the film’s cast of 11 child superheroes notable for featuring a female lead, several black and Asian characters and a boy with special abilities who uses a wheelchair.

“I’m always looking to do that in my films since the beginning and that was what I liked about this early,” Rodriguez explains.

“It’s just something that was very organic to the story because the adult superhero team would have been assembled from the best of the best all over the world. That works well with this audience too with Netflix movies going out all at once all over the world.”

Still, having such a large ensemble cast created something of a logistical nightmare when it came time to shoot the film.

“It’s very tedious because you have got 10 or 11 people and that’s what this whole movie was because there are 11 kids in every scene because they are all together, they’re not split up.

“I had to wrangle them for every shot and make sure they all had a very specific thing to do.  We only had six hours a day, that’s like half a work day. So that was a challenge.”

While Rodriguez insists he makes kids films “purely for the innocence of children” with no adult jokes that go over their heads, We Can Be Heroes does feature a US President, played by Happy Gilmore’s Christopher McDonald, who audiences are initially told sleeps in until 12 and struggles to put a sentence together. Could this be a reference to anyone in particular?

Rodriguez laughs at this suggestion.

“It’s funny because I really did think maybe the adults would laugh at that but when we tested it to an audience in one of the earliest versions before the pandemic hit, kids laughed the most. So, they all thought they knew what we were talking about.”

Ultimately, he insists that was simply “misdirection” as part of the film’s wider message about the importance of parents being role models to their kids in order to ensure they make the world a better place because, as Rodriguez puts it, “obviously we’ve screwed this place up.”

“It’s designed to be something to inspire the next generation. It’s supposed to show that the world is kind of falling apart. That adults are not working together – just like the adult superhero team shows.

“There are constant battles within the group and this only underlines the problems in not being able to see eye to eye, to make a compromise, to make concessions, to make things work.”

Rodriguez hopes that while We Can Be Heroes entertains it also encourages better communication among parents and children to ensure the same mistakes found in society today, which have been drawn into sharp focus over the past 12 months, are not repeated.

“The kids need mentors; they need role models. Parents have to step up and be better examples and kids have to know that they are the future. They have to do things a better way and they are going to have better ideas.”

We Can Be Heroes is available on Netflix from 25th December.

Old letters spark recollection of a dysfunctional family, a foster care childhood, and one enduring love
Critical Flaws Disclosed in Device42 IT Asset Management Software
The Asahi Shimbun Newspaper Signs With Storied Media Group With Goal To Mine IP for Film & TV
‘It doesn’t make any sense’: US schools stock up on AR-15 rifles after shooting
Liz Truss ‘misinterpreted’ over ‘no handouts’ remark, her supporters say