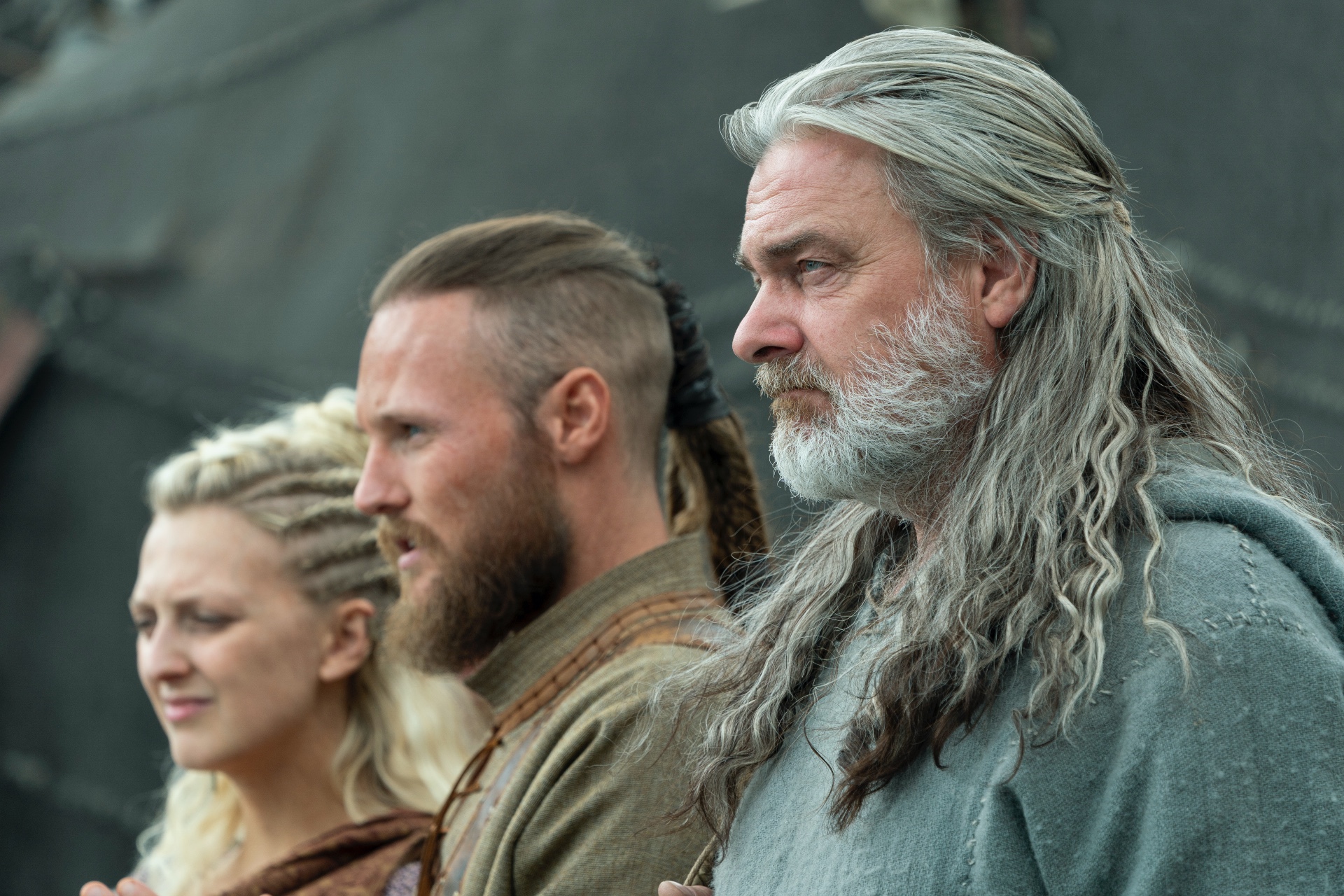 This Vikings season 6 part two review is based on all 10 episodes and contains no spoilers.

Vikings has always been Ragnar Lothbrok’s (Travis Fimmel) story. First, we witnessed the rise of the man himself from farmer to visionary to earl to king to legend. Post-Ragnar, the show became an exploration of how Ragnar’s legend suffused and inhabited his sons, and the consequences of its interpretation upon enemies, frenemies, kith, kin and Kings the world over. And, now, the saga comes to an end with the second half of Vikings swansong sixth season, ten episodes that drip with all the blood, battles, tears, seers, fears, and philosophy you’ve come to expect from the History Channel’s flagship show (though this season will premiere on Amazon).

It’s tough to write a spoiler-free review of a show like Vikings, especially here at the show’s conclusion where it won’t be surprising to learn that the blood flows like wine. Who lives, who dies? Who returns, who stays away? Even acknowledging the presence or absence of a surprise within a certain context could constitute a massive spoiler. As a consequence, much of this review will read like the ravings of the show’s very own seer, a web of insinuations and mystical mumbo jumbo designed only to make sense once the prophecy has been made flesh.

Early in the season, Gunnhild (Ragga Ragnars) remarks: “Perhaps the Golden Age of the Vikings is gone.” This is a perfect distillation of the thematic ground covered by this half season. Here we have the fall of an empire, the erosion and sometimes amputation of the old ways, and the savage geo-surgery of a flailing world in flux. Absolute power corrupts absolutely; only the truly mad would seek to be king. The battle between paganism and Christianity, always at the forefront of the series, reaches its culmination here, and the episodes are awash with rich religious imagery and symbolism. There is also an answer, of sorts, to the question of which of Ragnar’s sons best embodies and encapsulates his legacy. Each of them carries a chunk of their father distilled within them: Ivar (Alex Høgh Andersen), his wrath, his thirst to conquer; Bjorn (Alexander Ludwig), his galvanizing spirit, his authority, his legend; Hvitserk (Marco Ilsø) , his pain, confusion and predilection for self-destruction; and Ubbe (Jordan Patrick Smith), his sense of adventure, his vision. Series creator and showrunner Michael Hirst knows that you come to these final episodes laden with ideas and expectations surrounding this philosophical set-to, and does a sterling job subverting or confirming them. His skill is in making the surprising seem inevitable, and the inevitable seem surprising.

Most of the Vikings’ world is bathed in blue and grey, an endless twilight of death and despair. Within these grim parameters the direction and cinematography never fails to evoke the beautiful, misty emptiness of the world: the howling of the wind on desolate hills; silence, smooth and dark, stretching towards the pale horizon. There are lots of sweeping aerial shots, which cast you, the audience, as Gods looking down on the action from above. The emotional distance this creates, especially above battlefields, reinforces the absurdity and futility of the bloodshed, something we’ve been encouraged to feel in every season, but never moreso than now.

The season is front-loaded with some thrilling sequences (including a suitably chilling use of CGI), and at least one moment that will make the hairs stand up on your neck, and hot tears fall from your eyes. The mechanisms of plot necessarily predominate in the early episodes, as machination piles upon machination, twist upon turn, and the pieces of the tragedies and double-dealings to come are moved into place upon fate’s great chess-board: a broken Bjorn has tough choices to consider following his people’s defeat at the hands of the Rus; Ubbe embarks on a westward quest in search of the promised land; Ivar and Hvitserk continue their uneasy alliance with each other within the fraught principality of the maladjusted, half-mad Oleg (Danila Koslovsky).

An accusation often leveled at Vikings is that it became a lesser show once divorced from Ragnar’s immediate orbit; that when he died, so too did the interest of many of the audience, who never quite took to his sons with the same level of enthusiasm. I can understand the hole that Ragnar’s exit left in the hearts of fans. He was a compelling, larger-than-life character, channeled with great charisma and presence by Travis Fimmel. But although this series is ostensibly about Ragnar, the story is also far, far bigger than him, a point this final season doesn’t fail to ram home. In fact, it’s the whole point.  Besides, the performances of Alexander Ludwig, Jordan Patrick Smith, Marco Ilsø, and Alex Høgh Andersen have always been uniformly excellent, generating more than enough presence, individually and collectively, to carry the show in Ragnar’s name.

If there is a mote of truth in the accusation it’s probably attributable, in part at least, to the challenges of satisfying such a sprawling ensemble. One of the beneficial things about the show having shed so many characters over the past few seasons is that the sons now have proper time to grow, develop and, ultimately, crystallize. In particular Hvitserk, who was always the sketchiest and most ill-defined of the brothers, finally coalesces into something greater than the sum of his parts. Even his unhealthy attachment to Ivar begins to make sense, and comes to play an instrumental part in much of what makes the final stretch work so well.

Ivar himself has always been a joy to watch – surely one of the greatest small-screen monsters – but occasionally he could be one-note, albeit largely thanks to his predilection for painting himself into a corner and then having to fight his way out again. Ivar’s relationship with, and to, the young Rus heir Igor (Oran Glynn O’Donovan) helps to humanize him, allowing him to recreate the better aspects of his own relationship with Ragnar, this time sans grand, King-busting plan. Ivar even demonstrates, from time to time, something approaching humility, which can’t be easy for a self-proclaimed God. Plus there’s a moment between Ivar and Katia (Alicia Agneson) that’ll have you punching the air in triumph, and then thinking strangely of yourself for having fist pumped such a thing.

Once the heavy gears of plot have cranked into place, the season dips into ennui, as characters drift, break down and take stock. This can make the season a slog to get through, especially if you’re binge-watching; like mainlining misery directly into your blood-stream. Even knowing that this was undoubtedly a deliberate structural choice – to make you feel the characters’ helplessness, heartache, angst and boredom; to understand what drives them to do what they do when Gods and men fall silent – you’re unlikely to emerge from the middle-to-end section brimming with vim and good cheer. Here, another central question is tackled: is there any escape from the seemingly endless cycle of death, destruction and revenge in which Viking society finds itself mired? What hope have Ragnar’s sons of escape when Ragnar himself, the most vocal advocate for a new way of doing things, ultimately perpetuated the cycle by posthumously siccing his sons on his enemies?

The final act makes everything worthwhile. Think of the middle act like purgatory before Heaven (or should that be Valhalla)? While not every storyline feels like it has an equal place and weight in the pay-off – the latter sections in Kattegat, especially, feel perfunctory and will probably struggle to elicit much interest – most of the series’ overarching narrative and thematic threads come together perfectly in the end, giving a deeply satisfying sense of simultaneous closure and open-endedness.

There are many surface similarities between Vikings and Game of Thrones, in terms of their stock-in-trade themes, settings, cast-counts, body-counts and bundles of R-rated violence. Where they differ significantly is in Vikings sticking the landing, and not just with the final episode – which is beautiful, elegiac and haunting – but over and throughout the whole final half of the season (give or take a few minor missteps).

Game of Thrones’ once stellar reputation will perhaps forever be sullied by an ending, and a final season that many felt was flat, rushed and cack-handed. This is not the fate that will befall Vikings, which, although it never attained critical, commercial or pop-culture success on anything like the same scale as Game of Thrones, now joins the pantheon of shows whose exemplary endings have cemented their legacies. Vikings can hold its head high among such luminaries as Rectify, The Affair, The Deuce, The Wire, The Sopranos (divisive as its ending proved), The Shield and Breaking Bad (pre El Camino, at least), having offered up a finale that is so resonant, dream-like, and profound that it serves retroactively to render all of the good things about the series better, and wash away any and all misgivings and doubts. It’s a gorgeous ending that will stick in your soul for a long time.