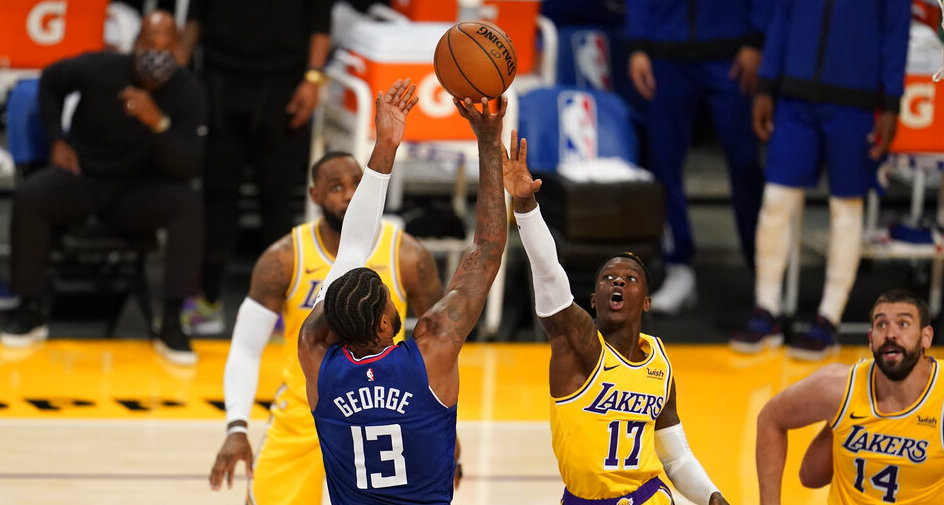 It wasn’t a great night for reigning champs the LA Lakers or past champs the Golden State Warriors, but the opening of the 2020-2021 season last night was great for the NBA and TNT.

Played under Covid-19 safety protocols in the City of Angels and the Republic of Brooklyn, the tip-off doubleheader snagged 2.9 million viewers in Tuesday’s primetime, according to Nielsen.

With the Clippers taking down LeBron James and the Lakers 116-109 and the now Kevin Durant starring Nets schooling Steph Curry and crew 125 – 99, last night’s Opening Night was up 1% over the 2019 tip-off on October 22 last year. Coming just over two months after the Lakers and the NBA wrapped up the coronavirus elongated season in the bubble playoffs, Tuesday’s overall tip-off viewership was up 5% from the July restart of the 2019-2020 season.

Overall, with big market teams filling the screen, the start of the season last night was the best the NBA has done since 2017, Covid or no Covid.

All of which must surely be giving commissioner Adam Silver, the 30 teams and the WarnerMedia-owned TNT a much-welcomed sigh of relief, coming off the 37% ratings decrease the playoffs witnessed year over year. Whether or not, the strong and steady metrics of last night hold for the NBA we will see over the next few days with holiday games galore in the offering.

In less successful relative Covid bubbles of their own, the NFL came back down double digits in its season opener, while MLB rocketed up. Football is still struggling to gain consistent traction, and the fact is the baseball and hockey playoffs took a 40% and 38% hit from 2019.

Unlike other American leagues, the NBA never suffered a coronavirus outbreak in their trailblazing approach to bringing live sports back to a stay-at-home nation.

Individually, the 10:04 PM ET starting Battle of LA game scored a viewing crowd of 3.08 million. That’s a fall of 14% from the Clippers vs Lakers opening night game of fall 2019. The 7 PM ET starting Warriors’ loss to the Nets had a hefty 2.7 million viewers.

TNT was the big winner of the night on both cable and broadcast networks in the key demo of adults 18-49.

Taking it to digital platform, the NBA opening night leapt up on the league’s social media. Video views rose 101% over last year’s opener and soared 243% in minutes watched – those figures are 88.3 million views and 42.7 million minutes for you dataheads.

Then again, now that the bubble is no longer in place, the NBA had to hit the pause button on tonight’s Houston Rockets vs Oklahoma City Thunder game because the Texas team lacked the eight players required by the league to take the court. Besides James Harden being fine $50,000 for going maskless, a trio of the Rockets have tested positive or inconclusively, one player is injured and four other players are currently quarantined.