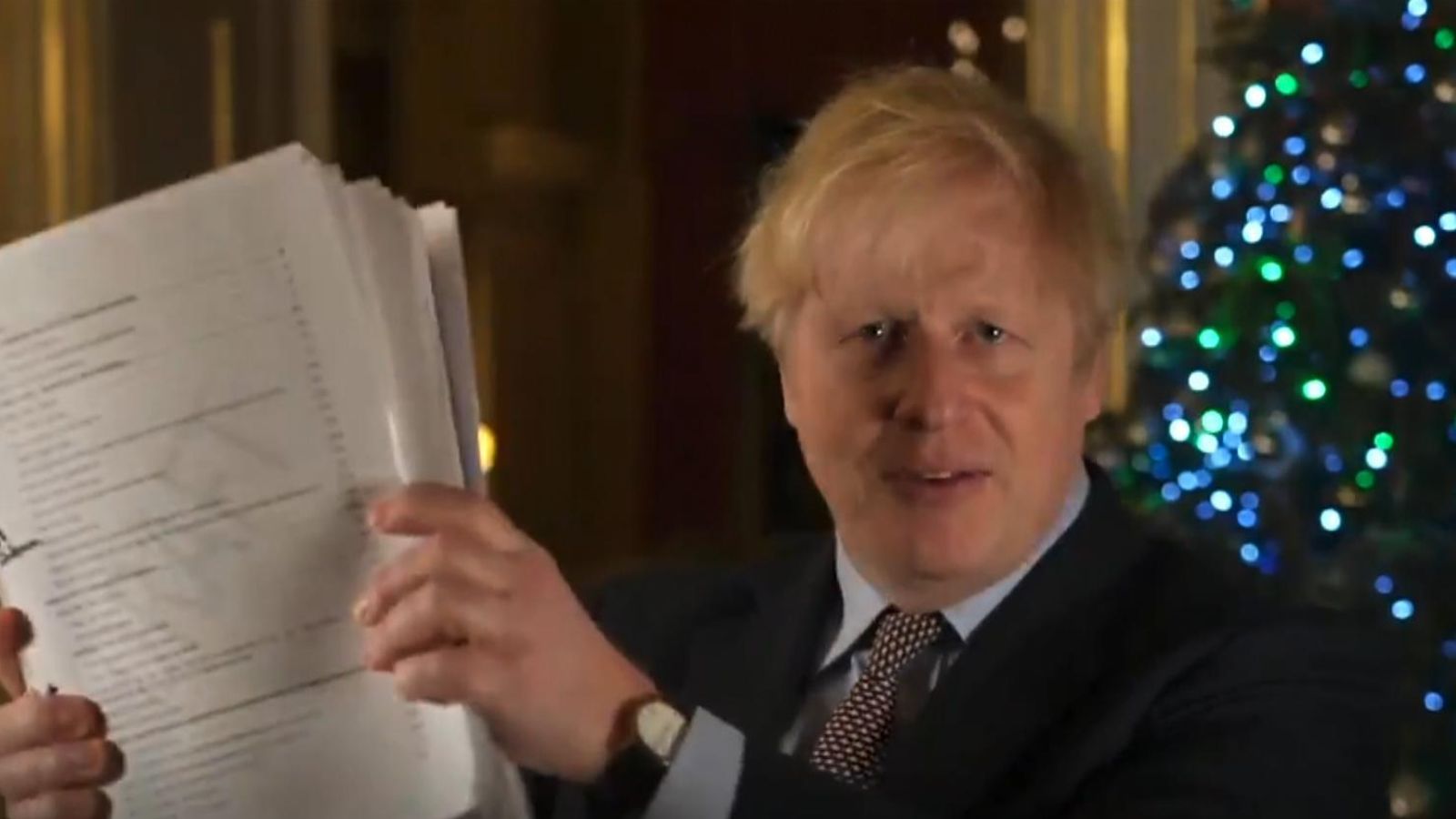 Boris Johnson has said the Brexit trade agreement is his Christmas present to the country – serving as “the feast” after he promised an “oven ready deal”.

The prime minister also used his Christmas message to say he believes the agreement will be the basis of a “happy and successful” relationship with the EU.

Speaking in a Christmas message filmed by Downing Street which he shared on Twitter, the prime minister said: “I have a small present for anybody who may be looking for something to read in that sleepy post-Christmas lunch moment.”

He then clutched the 500-page document and said: “Glad tidings of great joy, because this is a deal, a deal to give certainty to businesses and travellers, and all investors in our country from next year.

“A deal with our friends and partners in the EU.”

Mr Johnson also said the “oven ready deal” he promised during the 2019 election was “just the starter” and the 500-page agreement was “the feast”.

It will come into force on 1 January and means Britain has avoided a no-deal departure from the EU.

The legal text has yet to be published, but the prime minister claims it will allow companies “to do even more business with our European friends” while “taking back control of our laws and our destiny” – echoing a key message of the Vote Leave campaign.

Expected announcements by Britain and the EU were continually delayed throughout Christmas Eve as frantic last-minute talks took place.

One of the biggest sticking points – fishing rights – continued to hold up the agreement.

“British laws will be made solely by the British parliament interpreted by British judges sitting in UK courts and the jurisdiction of the European Court of Justice will come to an end.” 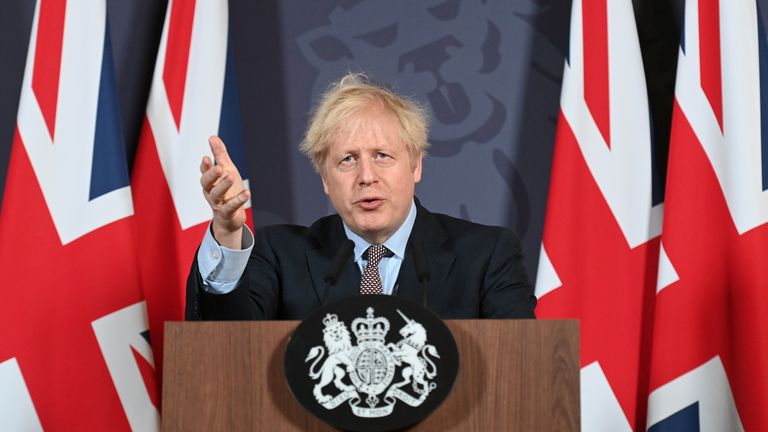 ‘We’ve taken back control of our laws and our destiny’

However, he added his party would back it in a vote which is expected to take place in the Commons next week.

“It was a long and winding road, but we have got a good deal to show for it.

“It is fair, it is a balanced deal, and it is the right and responsible thing to do for both sides.” 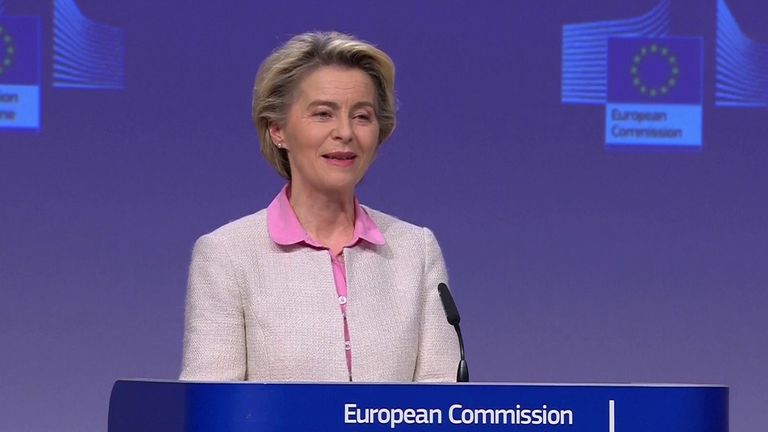 ‘Parting is such sweet sorrow’ – EU

There will be a five-and-a-half year transition period for the fishing industry, and co-operation will continue on issues including climate change, energy, security and transport.

Hauliers have cautiously welcomed the trade deal and warned drivers needed time to adapt to changes at the French border.

Lorry drivers will face customs checks when entering France from 1 January, while they will also require a permit to access channel crossings in Kent as part of plans to stop the county’s roads being clogged up by potential delays.

The Road Haulage Association said it feared its members will be hit by “vast amounts of new paperwork” and called on the government to grant a six-month implementation period from the start of 2021 to allow drivers to get used to the new system. 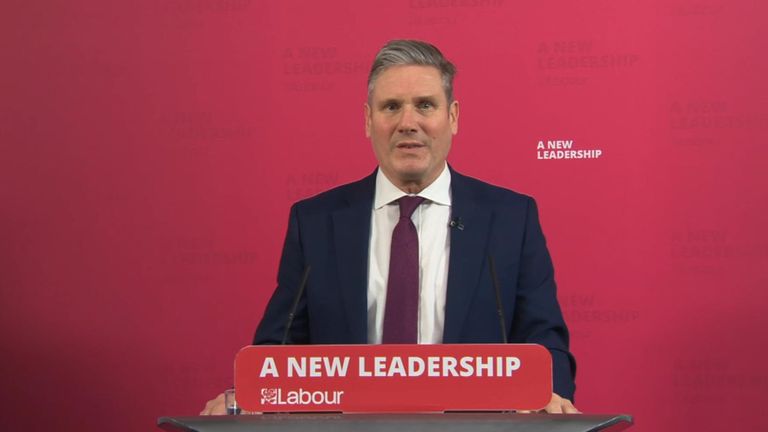 Starmer: ‘Up against no deal, we accept this deal’

The firm also said it was creating the Eurotunnel Border Pass, a “digital wallet” to allow hauliers to store the information needed for their goods to cross the border without having to present physical documents.

Mr Johnson has said the deal covers trade worth around £660 billion and means:

The prime minister acknowledged he had been forced to give ground on his demands on fishing and conceded he had not got all he wanted on the vitally important financial services sector.

Parliament will be recalled from its Christmas break to vote on the deal on 30 December, though MPs have been urged not to return in person to the Commons because of the pandemic unless it is “absolutely necessary”.

It is almost certain to be approved but Mr Johnson could face opposition from hardline Brexiteers.

The Tory European Research Group has promised to convene a “star chamber” of lawyers to pore over the 500 pages of the deal.

The agreement also has to be approved by the 27 EU members – and their diplomats will receive a Christmas Day briefing from lead negotiator Michel Barnier.

The European Parliament is unlikely to vote on the deal until the new year, meaning its application will have to be provisional until they give it the green light.